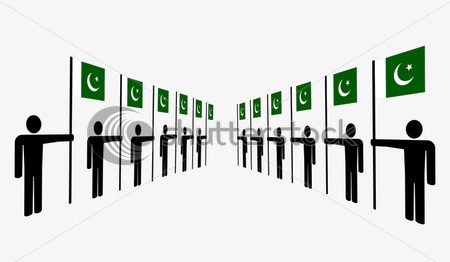 We, Pakistanis, are talented and intelligent people but many of us have an unrealistic approach towards life and a naive world view, even so we wish to impose our view upon the rest of the world. The case of U.S spy agent, Raymond Davis, has once again exposed that Pakistanis are reactive and emotional.

The Pakistani society has the potential to become a model society because of the unique characteristics and qualities of its people. In fact, no one in Pakistan has tried to introduce the strengths and beauties of the Pakistani society to the world.

As opposed to broken Western societies, Pakistani people are connected through bonds of love and responsibilities. They are spiritual and humane. Sharing pain and happiness is a way of life in Pakistan. Generally Pakistanis are very brave people. They are loyal and can sacrifice their own interest for their loved ones, or for a cause. Family is central and the strongest unit in Pakistan. People of Pakistan are hardworking, warm and generous and are famous for their hospitality.

However, despite their qualities and traits, Pakistanis are simple and can be easily manipulated, especially in the name of Islam. Religion has been an effective tool to exploit emotions in Pakistan.

The military in Pakistan has been using Islam to justify its strategies and policies. Military planners believe that by playing the religious card they can motivate soldiers and officers to be defenders of Islam, and this also wins the military a wider public support.

The Indian threat has been a major excuse for the Pakistani military to keep expanding its role, powers and expenses. The military portrays India as an enemy of Muslims without acknowledging that India has a bigger Muslim population than Pakistan.

Kashmir is an interesting case to explain the military’s calculated strategy of using religion. Kashmir is a strategically important region for India and Pakistan both. But Pakistan is more sensitive over Kashmir because water sources in Kashmir are crucial to Pakistan’s agriculture based economy. Perhaps, from the military’s point of view, only economic and strategic importance of Kashmir is not enough to persuade the Pakistani public to carry on supporting a dispute that has so far caused four conflicts with India. Therefore the Kashmir issue is presented to the people of Pakistan as a war between Islam and Hinduism.

Similarly, the Arabic word Jihad means ‘struggle’ and a struggle can be non-violent. But perception managers of the Pakistan military adopted, ‘Jihad-fi-sabilillah’, as a motto and translated it as ‘fight in the way of God’. The translation might not be accurate but it suits the military as it prepares ordinary soldiers to give their lives in the way of God. Hence fighting Hindus, Russians, Americans and other non-Muslims becomes sacred.

Following the fall of East Pakistan and massacre of hundreds and thousands of innocent Bengalese at the hands of the Pakistani army, the Hamood-u-Rahman Commission, which investigated the military operation in East Pakistan, had suggested fundamental changes in the syllabuses taught at schools and training centers of the Pakistani military. It did not happen. A few years later, the Pakistani military was engaged in the CIA led Afghan War that was fought in the name of Islam.

The very cause of the so-called Afghan Jihad was based on lies. But the Pakistan military together with the USA manipulated the public by declaring it a sacred war in the way of God. The CIA and the Pakistan military manufactured the menace of terrorism and hatred using drug and blood money.

The evil military dictatorship of General Zia-ul-Haq in the 1980s promoted an utterly wrong interpretation of Islam to maintain its control over Pakistan. In the name of Islam, the state patronized hatred and hypocrisy. During the Zia-ul-Haq era, a new breed of confused but greedy military officers, preachers, so-called Islamic scholars as well as religious parties and organizations emerged.

In the 1980s, hundreds of Salfi imams were giving sermons in mosques in the Tribal region and in the up and down of the Khyber Pakhtoonkhawa province. This concerted onslaught on the hearts and minds of simple Pakistani has devastating effects on the social and political fiber of Pakistan which are apparent now.

The majority of the youth born in the post Zia-ul-Haq Pakistan seems confused about their identity and place in the world. They can be easily manipulated by those who use the Western imperialist policies as an excuse to wage holy wars. Pakistanis are led to believe that they have been victims of foreign conspiracies. They are told that the past was good and the present is evil therefore the past must be revived.

In the absence of logical and scientific self analysis, a large number of people in Pakistan tend to hide their insecurities behind strong opinions and extremist views. Emotional and irrational attitude is common even among the young and educated. Lack of critical thinking and rationality has given birth to intolerance, narrow-minded and racist tendencies. Consequently, violence is approved in today’s Pakistan.

Also Pakistan has failed in developing a modern, efficient and transparent governing system. Justice is in the hands of incompetent and subjective judiciary and accountability has been a tool of political victimization. In this backdrop, everything is left to Allah and corrupt and opportunist industrialists, traders and civil and military officers, who have been engaged in the loot and plunder of Pakistani resources. Injustice, economic hardships and corruption are eating up good characteristics of the Pakistani society paving way to selfish and greedy attitudes.

The Pakistani society needs deep soul searching. The first step would be to address the issue of Islamic identity because, in my view, it is our weakest point and the root cause of our irrational behavior and flawed thinking.

Islam is the final holy message from God but many of us have little understanding of what it means. It is so because in Pakistan Islam is presented as a set of very rigid, stagnant and inflexible rituals and rules where the stress is on fear and punishment. Consequently, there is a huge confusion in our minds and our actions are contradictory. Many of us are double-faced hypocrites. The irony is that we are not aware of our dichotomies. We believe that performing religious rituals and displaying our Muslim credentials is enough and give us a license to violate rules and impose our beliefs upon others.

As Muslims we believe that Islam is the perfect and final religion for the mankind. But we also ought to understand that the scope of Islam is not limited to a particular region, people or period. As a universal faith Islam has to be dynamic and accommodative. It cannot be rigid, limited or stagnant.

Islamic principals are based on commonsense. The purpose of Islam is to facilitate human beings in creating peaceful, just and modern society. Such a faith cannot approve hatred and violence. It cannot approve illogical and irrational behavior. Islam encourages learning and exploration. It advises its followers to expand their intellectual faculties and travel to seek knowledge. It does not restrict people irrationally. Indeed the very directness, fairness and simplicity of Islam make it attractive to all people.

The Pakistani society is suffering due to the confusions in understanding Islam and defining a Pakistani identity. Pakistan can either slide further into chaos and anarchy or it can start afresh by dealing with the above issues in a mature way.

One possibility is to declare faith as a private affair and the state has nothing to do with it. But who would take such a radical step, especially in the present circumstances?

The other option is to leave the things as they are and wait that with time the situation may change. This, too, is not a solution because hate-mongers and extremists will keep dividing the society until it collapses.

Perhaps we can consider establishing a scientific commission that should examine objectively and critically historical and social narratives followed in Pakistan. This Commission should redefine and interpret themes, which are imposed in the name of Islam, and recommend changes, improvements, corrections to historical narratives and education system.

Besides parliamentarians, scholars with degrees from reputable international universities should be members of the Commission. For example, Islamic scholars, professors of Islamic history and religious studies, anthropologists, psychologists, Arabic language experts as well as scientists from several disciplines should also be part of this institution. Representatives of other faiths and experts and scholars from Muslim and non-Muslim countries, too, should be invited to sit at this institution.

The Commission should explore and discover the spirit of Islam and provide guidance on complex, controversial and challenging issues of the modern day life. No other body, organization or individual should be allowed to issue fatwa or orders. The said body should suggest changes to education syllabuses and qualifications for mosque Imams that may include passing a psychological test.

Click here to post a comment
Right wing media and conspiracy of silence
Ridiculing Imran Khan’s revolutionary? The joke is on you, mates! – by Maula Bux Thadani