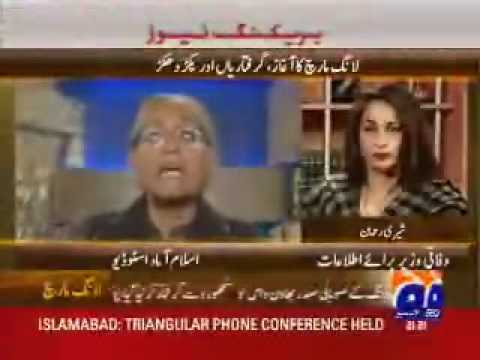 Related articles: Let’s have a revolution in Pakistan: Yeh, Yeh, Yeh! A conversation with Raid Shamat and Sasha Sham-me – by Razzak Memon The Civil Society Bulletin – by Abbas Baloch One of Pakistan’s renowned social commentators, Nadeem Paracha wrote this about the lawyers ‘movement’ nearly three years ago:

The truth is, had the “civil society” reacted the same way against all the Fazaluulahs and Abdul Rashids, the Hamid Guls and the Shahid Masoods as it is does against Benazir Bhutto or Musharraf, I would have been more than glad to join their great crusade. But it can’t. Because to me, this crusade, in which I see the lawyers, the democrats, the extremists and the liberals hurled desperately together on the same boat, is a boat being captained by a skewed bourgeois mentality concocted from pieces of religious confusion, splinters of paranoia, chunks of hypocrisy, twists of naivety and most of all, a happily full stomach.

Today, we came across a very interesting video clip about an Imran Khan’s supporter vying for a fast track revolution to free one convicted US citizen, Aafia Siddiqui and hang another US citizen, Raymond Davis, who was freed by our ‘independent’ judiciary.   This video clip has gone viral on Facebook and Twitter and this burger “revolutionary” has become a laughing stock.  Many civil society types are also having fun at his expense, as evidenced by their comments and distribution of this video.  The irony that this boy and his friends were also likely to have been part of the so called Lawyer’s Movement seems to have escaped many of our Fake Civil Society. Their views are as shallow and delusional as the elitest protestor in the video.  As recently as two years ago, youngsters like him who followed Imran Khan and Aitzaz were part of that movement to restore compromised and corrupt judges as were the leading luminaries of Fake Civil society.  Like him, they aligned themselves with such regressive and misogynist elements like Jamaat Islami and Sipah Sahaba. In general and barring the odd exception,  these civil society types are not very different from the boy in the video.  When they protest the killings of Salman Taseer and Shahbaz Bhatti, they can go no further than lashing out at the PPP.  They do not have the moral integrity to ever call out the security establishment’s patronizing of violent militia groups as a cornerstone of foreign and domestic policy.  It is the bitter result of these destructive policies that has claimed the lives of these two PPP loyalists and tens of thousands of other Pakistanis. They can never call out chauvinist opposition parties like PML N for their support of violent sectarian groups.  They lack the decency to hold their beloved Ayatullah Choudhary to account for releasing the leaders of the most dangerous Taliban affiliated outfits such as Hafiz Saeed of LeT.   The same Hafiz Saeed is in the forefront in whipping up hatred and bigotry and is one of the leaders of the Pro Blasphemy rallies along with Imran Khan’s PTI, PML N and now MQM! Parties like MQM will rarely be held to account for their two-faced policy of presenting themselves as secular but scuttling any initiative to de-link parochial ethnic politics from religious extremism. In their mass delusions, ostrich mentality and intellectual dishonesty, our civil society is not very different from the elitest protestor. Rather they are worst.  The boy is still young and might still become aware of the larger issues that beset the country and that protests are never a pleasant affair.  However, can the same be said of our civil society and their patrons and comrades of the Lawyer’s “Movement”; the strident Taliban allies and “pro-democracy” luminaries such as Gen. Hamid Gul, Roedad Khan and “human rights activist”, Tahira Abdullah?