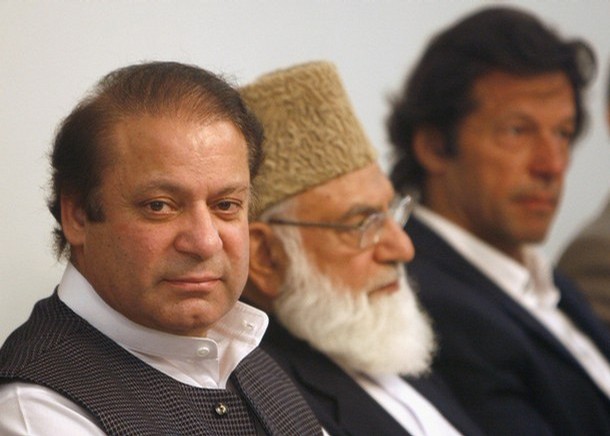 The urban trader class in Muslim countries — usually comprising middle-class urbanites — is a conservative section of society. In Pakistan too it has been one of the most willing recipients of faith-based socio-political trends and phenomena that began sweeping the country in the 1980s. It was the trader class — that included some industrialists, shopkeepers and both big and small businessmen — which was the first in line to support and then fund the political and social instruments that ran concentrated campaigns and drives to Islamise society and politics.

The most obvious reason behind this was the way mainstream conservative parties like the PML-N and some radical Islamist and sectarian groups, such as Sipah-i-Sahaba and the Sunni Tehreek managed to generate support from this class from the 1980s onwards. Indirectly helping these parties and organisations in bagging political support from this class were large Deobandi and Barelvi evangelical groups, such as the Tableeghi Jamat and the Dawat-i-Islami that, in the last 20 years or so. But the faith-based conservatism and activism has had deeper economic and political roots that actually stretch back to just before the arrival of Ziaul Haq’s state-sanctioned Islamisation process in the late 1970s.

One of these triggers had to do with the insecurity and uncertainty the Muslim trader classes began experiencing with the explosive emergence of Left-leaning nationalism. The rise of hybrid nationalist Muslim ideologies such as Arab socialism, the Ba’ath socialism and Islamic socialism between 1950s and 1970s saw nationalist governments in a number of Muslim countries move into the Soviet camp (except Pakistan). These largely secular expressions of modern Muslim nationalism saw countries like Egypt (1951-70), Iran (1951-53), Algeria (1963-86), Indonesia (1945-67), Libya (1969-), Iraq (1963-2004), Syria (1966 ) and Pakistan (1971-77) undertake widespread nationalisation schemes.

These quasi-socialist maneuvers coupled with populist, Leftist rhetoric and a progressive interpretation of Islam pushed the trader communities and business elites into feeling isolated and insecure. These communities thus became natural allies of the United States during its Cold War against the Soviet Union. They became the recipients of American funds and patronage, through the political parties thay supported, which in turn they used to formant unrest in their respective countries by funding and patronising right-wing organisations.

The trader classes invested their own moral and material patronage into political and Islamic evangelical outfits so they could penetrate urban middle and lower-middle-classes and transform society in a way that did not challenge their worldview. The idea was to bag bourgeoisie’s and the petty-bourgeoisie’s support against secular, socialist Muslim nationalist regimes by appealing to these two classes’ inherent conservatism and then shape it as an Islamic expression of protest.

They patronised outfits like the Muslim Brotherhood (Egypt, Syria), the Jamat-i-Islami (Pakistan), Nahdatul Ulama (Indonesia) and similar Islamist outfits in various other Muslim countries went on a rampage against socialism, deeming it ‘un-Islamic’ and the act of nationalising private property as something that was against the Sharia. The funds to these organisations were generated from the US and were then usually channelled through conservative Arab monarchies. It is also said that funding also came from Israel because its leading opponent, the PLO, too described itself as an Arab socialist organisation.

The propaganda onslaught that was successful in gathering support from the traders soon evolved into many of the patronised outfits eventually siding with the military (through street agitation) to overthrow populist regimes (Indonesia, Pakistan), or to become more aggressive and violent (Egypt, Syria, Iraq and eventally Pakistan). The coming together of all these outfits and the creation of new ones during the CIA/ISI-backed mujahideen insurgency against Soviet troops in Afghanistan further strengthened these outfits’ sphere of influence.

Though the defeat of the Soviet Union and of leftist Muslim nationalism secured the economic interests of the trading classes, in the 1990s the indoctrination political instruments had used against socialism and Muslim nationalism had also become a social phenomenon that saw this class’s conservatism take the form of an Islamised unit. Interestingly, the defeat of socialism would not mean the triumph of the trader classes, as such. Because the advent of globalisation and a new capitalist order now saw these classes as being pitted against aggressive competition from post-Cold War, rampant capitalism.

But instead of adjusting their ‘old school’ capitalist maneuvers to the changing dictates of the new economic order, the urban Muslim trader classes soon became suspicious of it, almost as much as they once were of socialism. The results were rather surreal: As a safeguard to defend their cup of capitalism from the one that emerged after the defeat of socialism, the trader classes in Muslim countries became the prime funders and movers of the somewhat vague concepts, such as Islamic banking, Islamic science, etc., the idea being that Islamic capitalism should differ from the so-called Jewish capitalism.

More dangerous, however, is the fact that many from this class (especially in Pakistan) have also been funding or backing extremist sectarian and radical Islamist organisations. It is their belief that the triumph of the isolationist mindset of these outfits would leave the trader classes’ economic interests dependant and profitable on factors within their own surroundings and away from international economic maneuvers and rules. It’s like a defeatist idea posing as a faith-driven winning force.