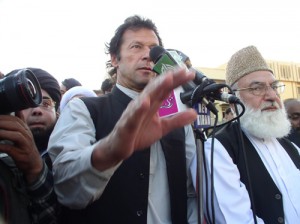 I have been writing on this issue for some time that our “BORN AGAIN MUSLIMS” are in a over kill mode criticizing the present government. Our Gen Hameed Gul and other burn out generals are talking of peace with India and talk about DEMOCRACY. Gen Hameed Gul who himself destroyed two democratically elected governments of 80’s & 90’s and bravely admitted to have rigged elections and with no regrets is now a Banner child of Democracy in Pakistan. Former chief secretary Roedad Khan ultimate right hand man of Zia & his brutal torturous martial law is teaching us of our legal obligations. He talks about independent Judiciary, Democracy and Civil society.

Former lota (turncoat) politicians like S.M Zafar, Sheikh Rasheed, Imran Khan, Raza Hiraj are busy giving lessons to the Pakistanis about democratic norms. Sheikh Rasheed who had thousands of votes registered in his one house is telling us about free & fair elections. Journalist like Hamid Mir who drives 7 series BMW given to him by Nawaz Sharif talks of honesty. Another right-wing columnist Haroon Rasheed who himself admits being in contact with Shabaz Sharif is another political analyst of this shameful media giving so called “independent analysis”.

Watching and listening to the nonsense spewed by our media I wonder why sky hasnt fallen on us. Mr. Zaidi has said has summed it all in his coulmn. These media propagandists never mention why petrol prices are rising, why electricity prices are rising. What is international trend in food prices. Whole world is in recession at the moment but still our economy grew (though not at the desired rate). Last Mush government everyday boosted of Dollar reserves, why dont they talk about that now, dollar reserves are at the highest in sixty two years, our exports have doubled, our remittance have increased, our car sales are at the highest in sixty two years. Politically NFC, 18 & 19th ammendment, Gilgit-Baltistan I mean there are many positives but these right wing blinded ideologues refuse to see anything positive  andhear no positive either.

READING the analyses of a number of former members of the Musharraf government, one gets the sense that the present PPP government is one of the worst failures in Pakistan’s history, and that it has been one of the more memorable disasters, from a long list, which have affected Pakistan.

These former advisers and bureaucrats — now regular newspaper writers who have had the opportunity to resurrect their reputation — seem as dishonest as one could possibly be. They hold forth on the long list of failures which they believe the present government alone is responsible for. Seldom do they have the honesty and integrity to look back and acknowledge the numerous failings of the previous government which they so enthusiastically supported, or to acknowledge that many of the problems which the present government faces are inherited or unavoidable.  While one also has a lot to say about the present ineffective,
inefficient and incompetent government, one must be able to offer a more honest assessment of issues, keeping in mind the structures, relationships and possibilities which actually exist and which allow transformation. Anyone can come up with a long wish-list of what needs to be done, but whether there are objective and material conditions which allow political agency to be exercised is another matter altogether.

Many former Musharraf technocrats, then in senior positions, failed to implement many of the reforms now on their wish-list when they were themselves in government, and which they now continuously reproduce in their articles. Just like many former generals who after retirement suddenly become advocates of democracy and of peace with India and yearn to become part of civil society, these advisers, bureaucrats and technocrats, also emerge as born-again citizens trying to claim legitimacy.

In articles written by many of these former Musharraf enthusiasts, the list of failures of the present government is long. It includes the failure to curb terrorism, to make Pakistanis safer, to repeal or reform the blasphemy law and the inability to revive the economy and reform the taxation regime and much more. Seldom do the critics of this government make concessions for the
difficult structures and situations which the current dispensation inherited. Despite this, the government has made some important
interventions, such as the 18th Amendment, the seventh NFC Award, Gilgit-Baltistan and so on. The fact that a coalition government with diverse interests and objectives, often tearing in completely opposite directions following nine years of a military dictatorship, has been able to achieve some key objectives is not mentioned at all.

The failure to ‘revive the economy’ is a favourite whipping horse of many of the writers who argue that the economic policies of the PPP government have been disastrous. Yet, they ignore the serious problems that exist in attempts to revive the economy, such as the world’s recessionary trend in recent years, rising oil and food prices resulting in chronic domestic inflation, the costs of the war in and around Pakistan, etc. They also fail to mention that despite these constraints, many of which are clearly part of the Musharraf-era legacy, the economy manages to move ahead, albeit at a slower pace. One needs to add that the present government has made a royal mess of the economy as well, but it is not solely responsible for doing so. It needs to be forthrightly criticised for its failures, but a fairer perspective is required.  These Musharraf supporters, although one doesn’t know if they continue
to be that or were mere opportunists to gain access to power, should conduct a more honest appraisal by comparing the first three years of the Musharraf government with that of the present PPP government.  They do realise, one is sure, that it was only the consequences of 9/11 which led to a bubble economy that allows them to go on about their supposedly wondrous economic policies and interventions. Had 9/11 not happened, not only would the economy not have had the high growth rate it did between 2002-07, Musharraf would have been in exile far sooner.

Let us all actively and aggressively criticise the present government for failing to deliver on its numerous promises. Many of its earlier high-profile schemes have fallen by the wayside. No one mentions the Benazir Income Support Programme any more. Yet, there are numerous sets of data which counter the claims made by the Musharraf technocrats, which are seldom mentioned by them. These include rising remittances, a narrowing of the current account deficit, far higher exports, a revived rural economy and perhaps even a dip in the already high inflation rate. The former technocrats only highlight the negative sets of data.

Three years into its rule, the incumbent government has failed on numerous counts and has been acutely disappointing. But so have most governments in the past. One could argue that this government is no worse than many others, and may in fact have performed better on some counts. The important measure to assess how well or poorly a government has performed should depend not on fulfilling someone’s wish-list, but on assessing possibilities and potentials and eventual outcomes, given objective and material constraints. On that count, this government has failed. But then, so did the Musharraf government. Given its far greater possibilities and expectations embedded within a system of complete dominance and authoritarianism, its failures have been far
worse.

The writer is a political economist.