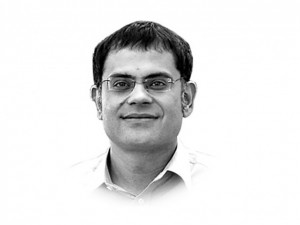 We would like to recommend the following two articles, by Raza Rumi and Cyril Almeida, to our readers that sum up the issue well.  For us, the outcome and the subsequent analysis is a vindication of what has already been published on this blog.  Nearly a month ago, one of our contributor’s Brandon Wallace, had this to say:

“In the end, Raymond Davis is the football that was aimed at the gonads of the US establishment in order to get them to play ball solely with the security establishment and drop even the pretense of engaging with the people of Pakistan.”

Another LUBP editorial by Abdul Nishapuri seems prescient when analysed by what Raza Rumi writes:

“International and local punditry, on the breakdown of the ISI-CIA relationship, also proved to be a bogey, as the two organisations continued to engage and find a solution”

In his article for the Express Tribune, Raza Rumi takes to task the “Ghairat Brigade”:

“The most important lesson that we may note for our future misadventures is not to whip public emotion against law, reason and civilised norms of diplomacy. As it is, we have misinformed the public, packed lies into textbooks and allowed the mullahs and media mujahideen to spread hate at will. All of this is definitely not in our national interest or national dignity. We can only be protecting our honour if we appear as a law-abiding, civilised polity and not a jingoistic state, full of armed lunatics in the public domain.”

Raza injects some much needed rationality and maturity in the debate.  His conclusion deserves special mention:

“Honour-obsessed TV anchors and analysts have not liked the outcome of this saga and some are loudly claiming that qisas and diyat laws were not applicable in this particular case. Or the families have been pressurised and that Pakistan has not protected its sovereignty. Quite frankly, they will have to swallow the propaganda they have churned out and, for a change, answer for their ignorance of laws, international politics and history. Pakistan needs to strengthen its economy, undertake major social reform and only then it can think of dictating to the world with augmented bargaining power. Nuclear prowess alone cannot please the gods. Simple.”

Cyril Almeida (DAWN), in highlighting the pervasive role of the security establishment adds a cautionary note:

“Indignant pundits on TV are warning that terrorism and extremism may increase now that Davis has been set free. If they are right, it’s only because Davis was made into an issue of national honour. And you don’t have to look very far to find who encouraged that characterisation in the first place. Remember the Kerry-Lugar fiasco? One little statement from GHQ and on cue the political class, sections of the media and the public at large erupted.

What did that gain us? Not one term was changed, not one word. If it was all about assurances, surely the establishment could have used other channels to demand those. And if those assurances were violated, the ante could have been upped later. But it’s the unthinking recourse to public pressure that seems to characterise the establishment’s responses. And they always appear to be responses, not part of some broader strategy.  In the Davis affair, the central concern for the Americans wasn’t the response of the Pakistani public, it was to get their guy back. So once we got their guy, we had bargaining power. Use it, quietly and efficiently.

And for those who think that killings in broad daylight in Lahore couldn’t be dealt with ‘quietly’, then think about all the attacks against military installations and security agencies in the past few years What visa details or interrogation tapes or jail-cell conditions has the public learned of in any of those attacks?  Raymond Davis is gone. But the bitterness and hate and propaganda the episode spawned will linger on.  Kerry-Lugar, drone strikes, Aafia Siddiqi, Raymond Davis — why can’t the establishment here fight its battles with the US without making this place a little more dangerous, a little less stable each time?”

Our chattering elites should pay attention to the power of the un-elected institutions. Many in this category are as mute or silent about the role of the establishment as they are vocal in fulminating about the current elected government.

The conclusion of the Raymond Davis affair has been very interesting.  The chunk of the “Ghairat Brigade” in the form of the PML N has been on board with the US as has the “independent” Judiciary that is worshipped by the chauvinist sections of Pakistan’s urban elites for “standing up” (solely) to the weak elected Government and folk singers, whilst ensuring the freedom of our Jihadi “Ghazis”!  Our all powerful establishment too has played a central role in this entire crisis. Lastly, it was Saudi Arabia that paid the Bloody Money; sorry Sansar Abbasi/Jang Group/AAJ, your lies failed, Again!   Our fake civil society needs to rethink its selective haranguing of the PPP.  Perhaps now they have finally awakened to the fact that it was the establishment, PML N, the Judiciary and Saudi Arabia that used Sharia law to free Raymond Davis.

The conclusion of this affair proves that the PPP-lead government was not in a position to settle this issue on the basis of cautious and mature international détente. By being sidestepped in its efforts by the establishment and its proxies and their Saudi allies, Zardari played a master stroke in exposing the power of the Deep State and the struggle for democracy, moderation and progressiveness to prevail in Pakistan.  For those Pakistanis who are not stuck in Ostrich mode, the Raymond Davis affair like the Kerry Lugar Bill, the UN commission report on MBB’s assassination and the Mumbai attacks exposed the true power players in Pakistan and the struggle for those who truly want a functional democracy here.