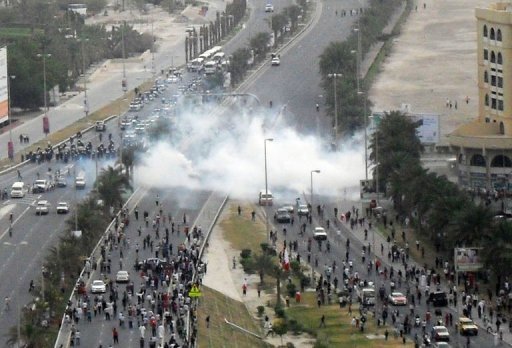 The Overseas Employment Services (OES) of the Fauji Foundation is recruiting hundreds of ex-servicemen to serve in the Bahrain National Guard (BNG).

Advertisements in an Urdu language daily and on the OES website state that the BNG “immediately” requires people with experience and qualifications as anti-riot instructors and security guards.

The advertisement states that a BNG delegation is visiting Pakistan from March 7 to March 14 to recruit people from the following categories: officers (majors), Pakistan Military Academy drill instructors, anti-riot instructors, security guards, and military police as well as cooks and mess waiters. Civilians were required as security guards, while the rest of the categories required experience in the military or security forces. The requirement for anti-riot instructors was NCOs (non-commissioned officers) from the Sindh Rangers or officers of an equivalent rank from the Elite Police Force.

The official at the OES also said that Bahrain’s army had recently recruited ex-servicemen from Pakistan. In December, the OES advertised positions for retired Pakistan Army doctors to serve in the King’s Guard.

The Fauji Foundation was set up in 1954 and serves as a trust for ex-servicemen and their families. It is believed to be among the largest industrial conglomerates in the country.

Pakistanis serving in Bahrain’s security forces were reportedly involved in a crackdown on protestors in Manama in February in which seven people were killed and hundreds injured. Some injured protestors told the media that the police who beat them up spoke Urdu.

“They are uneducated, don’t speak Arabic and are difficult to communicate with,” said Maryam alKhawaja, the head of the Foreign Relations Office at the Bahrain Centre for Human Rights, about the Pakistanis serving in the anti-riot police.

“Mostly they are Baloch. One story I heard from a witness was that a Baloch refused to shoot a protestor at close range, despite orders from his superior, because he was saying Allah o Akbar. The high-ranking officer, who was Bahraini, took the Baloch’s weapons, beat him and then shot the protestor himself.

According to Reuters, opposition activists estimate that up to half of Bahrain’s approximately 20,000-strong national security apparatus is made up of Sunnis from Pakistan, Jordan and Yemen.

Recruiting security personnel from these countries and any moves to naturalise them is viewed by the opposition as a way to increase the Sunni demographic, given that at least 70 per cent of Bahrain’s population is Shia. Thousands protested in Manama earlier this week against any move to give citizenship to Sunnis serving in the military.

“We can’t tell whether there has been an increase in Pakistanis (in the security forces) since the government refuses to give us any numbers on political naturalisation,” said alKhwaja.