Pakistan’s urban chatterers (also known as Fake Civil Society FCS) deliberately refused to accept Mumtaz Qadri (assassin of Salmaan Taseer) as a product of the military establishment’s jihad enterprise. They rather comfortably called him a lone wolf; a lone wolf who is garlanded by lawyers and appallingly defended by shameful Taliban apologists in the media.

A few days after the assassination of the Salman Taseer, Shahbaz Bhatti’s father passed away and his funeral was attended by the poor Christan community, PPP workers and PPP Federal Ministers. The right wing inclined media completely ignored it and their hand in glove friends in the urban chattering classes, who pose themselves as “Liberal Left” these days, didn’t bother with it either and neither attended the Christian funeral.  Not fundo enough for the former and not glitzy enough for the latter. Furthermore, the English media dons, many of whom present themselves as the bastion of liberalism didn’t even bother to write about this nor did they expose the hypocrisy of their right wing colleagues.

The right wing forces succeeded in creating a pro-blasphemy poster boy in the  shape of “Mumtaz Qadri”; it’s now irrelevant to discuss how exactly those forces supported Qadri in his plan to assassinate Taseer. Their political agenda they pursue is surfacing.

The subsequent assassination of Shahbaz Bhatti shows they just don’t want to kill the blasphemous and surrender themselves to become “Ghazi-hero”; they have their political agendas as well. This time the killer was not interested in becoming  another Ghazi to be showered with rose petals from an emotionally charged crowd of ‘True Muslims’ lawyers!

No journalist including those from the fake liberal class paid much attention to the previous attacks on Shahbaz Bhatti’s life prior to his assassination and the life threats he received< for pursuing justice for Gojra victims, Aasia bibi and other oppressed people. The shameful role of the Punjab Government of PML-N (a partner of Sipah-e-Sahaba) and the Judiciary in safeguarding the culprits of the Gojra incident has been completely blacked-out and it seems, deliberately ignored.

In fact the FCS once again resorted to blaming the victim (the PPP) on the murder of yet another of its central leaders.

Here is another exemplar of the hypocrisy of the Pakistan’s so called progressive, civil society. These days, Fake Civil Society’s favourite cheerleader for the repeal of the infamous blasphemy laws, Nasim Zehra, Director of Dunya News.   Incidently, this channel is the same one that hired the infamous Meher Bukhari (after she “left” Samaa)  whose incitement against the late Governor Taseer on her show is a shocking example of how the Pakistani media provides space to Islamofascism.  Many segments from our fake civil society also agree that Meher’s show had a significant role in inciting violent sentiment against  Salman Taseer’s that lead to his assassination.  Nasim Zehra should first oppose the employees and subordinates spreading hatred from her studio before pretending to fix the PPP.  Did she have the integrity to castigate Mushtaq Minhas after this interview when he was still with Dunya!

As part of a troika (Teen Jeem) of establishment, journalists that included Mushahid Hussain and Shireen Mazari, Nasim Zehra was at her smug best in being a partisan supporter of the “Lawyer’s” movement.  Both she and Shireen Mazari are some of the many who pretend to be neutral in the media but are fervent supporters of Imran Khan’s Tehrik Insaaf Party.  After Taseer’s murder, Nasim Zehra has re-branded herself as a “liberal” and is now using a civil society platform to forward the PTI agenda by maligning the PPP.

In a bizarre twist of logic, she attacks the PPP for the support that rightwing political parties like PMN-N, PML-Q and PTI gave to the Pro Blasphemy law rallies.  As if these parties were the paragons of liberal secular thought and not the reality, which is that they are ideologically Pro-Taliban apologists!   Her justification of inviting Zaid Hamid to her show, with the flimsy logic that one needs “the other side of the picture” does not wash in giving airtime to murderers and lunatics.  One can’t pretend to be a liberal and yet promote the most regressive mindsets by giving them airtime!

This has been a consistent trend amongst many of our pro-establishment journalists who are now trying hard to re-brand themselves as liberals.  When the extremists were given space by the establishment in every sphere of our lives, these “journalists” gave airtime to Taliban apologists and Jihadi leaders and now they want to falsely malign the PPP for the current Talibanization that has claimed the lives of Bhatti and Taseer!

The threat pamphlets that were left at the scene of Shahbaz Bhatti’s murder actually say a lot. It is only Zardari and co. who are considered the liberal renegades, not the leading lights of the FCS.  If the Islamofascists consider Zardari and co to be the most potent enemies then at least don’t trash them if one can’t align with them to fight this menace.

There is a reprehensible silence from these quarters (FCS) over the hate speech and wall chalking against Afzal Chishti [PPP Ulema Wing Secretary] who lead Governor Salmaan Taseer’s funeral prayer.

Similarly, FCS simply ignore how PPP rallied behind its martyrs, Shahbaz and Taseer.  Was it not PPP leaders who held the funeral commemorations of Shaheed Taseer at their houses where everyone rallied behind Taseer under the backdrop of ominous threats.  FCS ignored Samina Ghurk, President Lahore PPP and Faiza Malik,  PPP Lahore Women Wing President and their courage to commemorate ST by having his Chelum  at their  home. 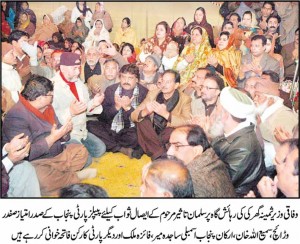 Here is the PPP Punjab leadership in solidarity with the  late Governor Taseer a an event hosted by Tanvir Ashraf Kaira. 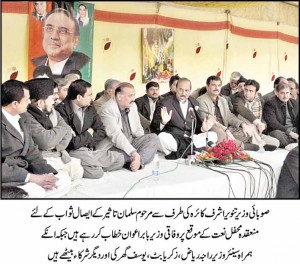 Here is to those who think that PPP “abondoned”  Taseer and “threw him to the wolves”: 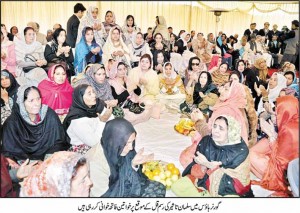 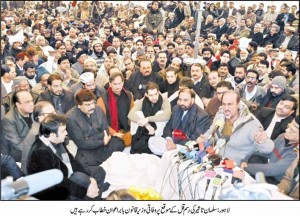 Our urban chattering elites, for the most part, deliberately ignored Asif Zardari’s bold initiative to reach out to India for peaceful and cordial relations after he was elected President.  Again, this is a consistent trend, where these Fake Civil Society wallas deliberately ignore the strong positive steps taken by the PPP leadership and continue to bash them mostly for imagined and fictional excuses; after all PPP bashing sells much more than an honest appraisal of the issues at hand.

For the first time, a Pakistani head of state promised a “no-first nuclear-strike” against India, talked of change and reconciliation, of shared bloodlines and the possibility of doing away with passports.  The President borrowed a quote from his late wife, who once said that there’s a “little bit of India in every Pakistani and a little bit of Pakistan” in every Indian. “I do not know whether it is the Indian or the Pakistani in me that is talking to you today,” Zardari said, amid applause from his high-profile audience, which included diplomats, politicians and industrialists.

Unfortunate as it was, soon afterwards, the GHQ intervened to sabotage and our FCS pretty much toed the line of the establishment. The 26/11 incident was used by the by the Right Wing political parties and their mentors in the army to propagate further hatred against India and provide more oxygen to our Jihadis.  At that time, our urban chattering elites were enjoying Jamat-e-Islami street power at the Constitution Avenue for restoration of Judiciary.  True to their nature of intellectual dishonesty, they did not support the President. Infact, when the Prime Minister and President tried to reign in the ISI under government control, the rebuff that they received from the establishment was actually supported by our fake civil society English media dons! Its funny that in their previous “revolution” (the so called lawyers movement), FCS required Jamati Islami street power and now they want the PPP to lead revolution for abolishment of blasphemy laws.  In analysing the deleterious role of Pakistan’s Fake  Civil society, an incestuous nexus of special interest groups, one can say that hypocrisy really has no limits!

Until and unless, our FCS wallas don’t realize that the menace of extremism cannot be combated with cosmetic measures and an ostrich mentality that ignores the role of its main creaters and supporters, all initiatives are simply window dressing and a promotion tactic to get more money for their NGOs.