This is an attempt to compile ‘Raiwand made Lota’ related videos and news, it is also a pursuit to give LUBP participants, viewers and readers a general sense of how Pakistan Muslim League Nawaz is promoting horse trading and corrupt politics in the Punjab. And by doing this PML-N and it’s leadership is making a mockery of the notion of ‘clean politics’. We are quite sure that the viewers/readers will enjoy it. 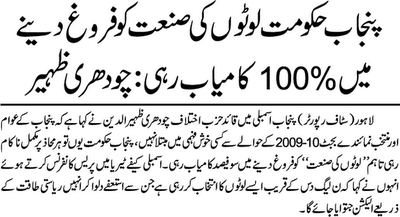 Mian Nawaz Sharif lies when he says that he is only welcoming back only those who were kidnapped and whose loyalty was bought by General Musharraf by coercion and harassment. Chaudhry Zeharudin has rightly pointed out that most of them were never in nawaz’s party. They were new faces in General Musharraf’s parliament.

Samina Khawar Hayat’s advertising campaign to promote PMLN product’Lotas’: In Tonight with Jasmeen Pakistan Muslim League Quaid (PML-Q) parliamentarian Samina Khawar Hayat produced lotas (bathroom vessel) to condemn the floor-crossing tactics. She both literally and symbolically condemned the turncoat politics by producing “lotas” (ewers used in bathrooms for ablution) – that are symbolic of turncoats in Pakistani politics – and telling the host that she was showing the true nature of those changing fidelities.

Rolling a plastic lota on the desk, Miss Hayat actually took out another lota from her and smashed it to pieces by throwing it down on the floor, saying that this is what ultimately will happen to all lotas who have engaged in dirty politics.

A must watch video: Samina Khawar Hayat illustrating the true nature of “lotas” on Tonight with Jasmeen show.

PPP, PML-Q join hands against politics of turncoats in PA

Despite the fact that it was the first time that PPP members sat on the opposition benches after they were ousted by the PML-N, they made a bold entry in the House.

The House continued to be echoed with highly objectionable slogans from both sides almost all the time, but the PPP-backed MPAs proved to be more specialised in playing the role of the opposition.

The PML-N MPAs were not even in a position to adjourn proceedings of the House, since they themselves had summoned the assembly’s session and they were left with no choice but to listen to hard-hitting speeches and taunts from the members of the opposition.

It may be mentioned here that the speaker came to the rescue of the treasury benches twice by adjourning the House for prayers.

Proceedings of the assembly started at 3:17pm on Friday just 17 minutes behind schedule with Speaker, Rana Muhammad Iqbal, in the chair.

As the proceedings were in progress, Kamran Michael, a minority member, on a point of order, requested for a two-minute silence as a mark of grief over the assassination of Federal Minister for Minorities, Shahbaz Bhatti.

The minority members as well as the opposition members sat on the floor of the House to register their protest.

Meanwhile, the PPP and PML-Q members started shouting slogans to condemn the induction of turncoats into the Unification Group and the atmosphere of the House gradually descended into chaos.

This was the time when the fiery speech by Raja Riaz as opposition leader added fuel to the fire. Riaz continued his speech for about five hours and said that now PML-N would come to know that what it took to be on the treasury benches.

He said that PPP was still ready to help the PML-N but the latter should return the turncoats to their parent party.

Dubbing members of the Unification Group as ‘Chicks’, he said PML-N leader, Nawaz Sharif, should ask them to go back to their parent’s party, otherwise his party would register cases of theft against them.

He informed the House that 52 government officers who were denied postings and were termed as black sheep, were now being posted on the request of the members of the group.

Criticising the rulers of Punjab, he said that that they should answer why over 200 robberies were being committed only in Lahore alone.

He said that the students, doctors, clerks, teachers, labourers and even the nurses were on the roads to seek their basic rights and this so-called ‘good governance’ had even devoured the roll numbers slips of matriculation students.

He alleged that the Punjab chief minister took all the decisions in consultations with his secretary, Dr Tauqeer. “PPP will now teach Tauqeer everything for misbehaving with the MPAs,” he said, adding, “Gone are the days when PML-N used to humiliate MPAs.”

Riaz exposed the worth of Aashiyana Housing Scheme, saying that now even the engineers had termed the project impracticable.

He said that billions of rupees were being wasted in the name of Danish Schools, while over 1,600 schools of the province even did not have roofs and boundary walls.

He said that now the Punjab chief minister would have to convene the cabinet’s meeting twice a month and PPP would force him to do so.

He also warned the bureaucrats to mend their ways and deal politely with the elected representatives. “We will beat them to teach them a lesson for misbehaving with the MPAs,” he said, adding that PPP would work to free the chief minister from the clutches of Tauqeer as well.

Riaz drew the attention of the speaker for not allowing PTV to cover proceedings of the assembly. “Ouster of PTV is a conspiracy against me,” he said, adding, “This is the first day of PPP in the House as opposition and the media is being restricted.”

When the speaker said that he had not stopped PTV from covering the proceedings, Riaz replied by saying, “Then call the PTV back, otherwise I will not continue.”

The speaker had to adjourn the House proceedings till Monday afternoon. It may be mentioned here that the use of abusive language and exchange of highly objectionable slogans, especially against the president of Pakistan was the main feature of Friday’s proceedings.

On many occasions, the PML-N MPAs turned overtly hostile and the House looked like a fish market.

There was no discipline or decorum in this assembly of graduates. It is also worth mentioning that it was the first time when MPAs from both the treasury and opposition benches showed shoes to each other. Earlier, the united opposition ridiculed defectors outside the assembly’s building and remained busy in sloganeering against the Unification Group for more than an hour.

Riaz also presented a ‘lota’ to the PML-Q leader and former opposition leader, Chaudhry Zaheeruddin, while females legislators from both the parties kept chanting slogans.

Interestingly, Riaz said that PPP was in no mood to move a no-confidence motion against Shahbaz even in the presence of Zaheeruddin.

The PPP lawmakers, soon after the parliamentary party’s meeting at the assembly’s cafeteria, actually brought lotas from their vehicles and start playing football with these to humiliate members of the defecting group and the PML-N.