The Pakistan Muslim League-Nawaz headed by Mian Nawaz Sharif is patronizing corrupt politics as well as promoting ‘horse-trading’ in Punjab for the sake of its own vested interest and political benefits. And even it’s leadership blatantly ignored charter of democracy, recently passed 18th amendment(which leads to disqualification of a person who changes his party for one reason or another), constitution and ethical values, just to save Punjab government.

As per news report in the ‘Express Tribune’, the President Asif Ali Zardari accused the PML-N of re-starting the tradition of horse trading. He, however added that these latest developments would not influence the PPP’s policy of carrying out “politics of reconciliation”.

“The Pakistan Muslim League-Nawaz took the wrong decision of ousting PPP ministers from the Punjab cabinet at the time when the PPP already has implemented 21 points of Charter of Democracy and now is going to implement 10-point agenda given by the PML-N,” she said.

Farooqi said that after general elections, the PPP had strength to form a government in Punjab adding but it provided a chance to the PML-N honoring the mandate following CoD and Shaheed Benazir Bhutto’s policy of reconciliation.

She observed that the PML-N had taken steps to implement the agenda of elements who wanted instability in the country and wished to damage democracy, adding that PML-N was going to aid anti-democratic forces by encouraging horse trading.

Firdous strikes out at Nawaz

Federal Information Minister Firdous Ashiq Awan has blamed PML-N chief Nawaz Sharif for not abiding by the Charter of Democracy.

Talking to the media in the Sambaryal area of Sialkot, the minister said the PML-N chief was responsible for the uncertain political situation in the country. She said the PPP has always challenged elements attempting to derail democracy. She said the government has done enough to eliminate the menace of terrorism, and has tried its best to resolve issues of the common man.

Federal Law Minister Dr. Babar Awan says that Pakistan Muslim League-Nawaz (PML-N) is harming democracy through horse trading.
Taling to the media at Lahore Press Club, Awan said democracy needed time for its establishment, but unfortunately “some elements” don’t want it to flourish. He said the PPP sincerely worked on 75 per cent of the PML-N’s 10-point agenda. The law minister said that horse trading in politics is an unfair practice. He added that if anyone uses floor-crossing as a tool, it would harm the democratic environment.

Government of the Punjab not only indulging in corruption but also patronizing corrupt elements.

Dr. Tahir Javed, the group leader of unification block of PMLQ faced more than 100 law suits in United States which also revoked his licence to practice, in connection with the largest known outbreak there of Hepatitis C infection. If you type his name in google search you get plenty of information about each and every aspect of this case.

The former health minister of Chaudhary Pervaiz Chaudhry Pervez Ilahi’s provincial cabinet, Dr Tahir Ali Javed, who practiced in America from 1989 to 2002, has been formally accused by the state of Nebraska in connection with the Hepatitis outbreak which has been linked to his former clinic.

In this episode of Reporter, Arshad Sharif shows the official charge sheets against the Dr Tahir Ali Javed and questions the logic behind the PML-N’s decision of entering into coalition with a group that has such dubious characters as its leaders.

The real Face and corrupt character of Dr Tahir Ali Javed exposed by Kamil Ali Agha, he also said that the PML-N is promoting horse-trading in Punjab: 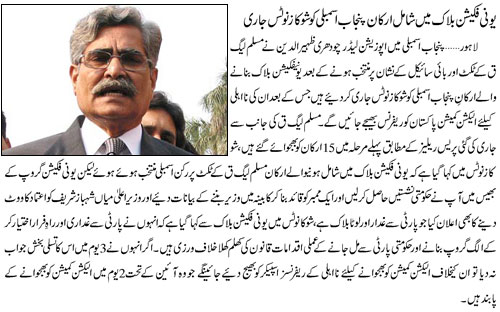 Even Sohail Warriach, the unofficial spokesperson of the PML-N has criticized Mian Nawaz Sharif for confrontational and ’90s politics of Changa Manga’:

http://www.youtube.com/watch?v=hXeIGsFONYc
In the present scenario in Pakistan, the national reconciliation is the way forward to ensure a strong democratic set-up in the country, as per constitutional provisions, the treasury and opposition have equal responsibilities in running affairs of the state, inflexibility and stubbornness in politics cannot make any breakthrough on issues or affairs and all the parties should adopt a new political culture in the new century and open doors of politics, as the democracy is a futuristic approach. The patience and tolerance are essential factors for continuation of democracy.

Sharif brothers, who are products of a dictatorship, once again give a bad name to Pakistani politics, as there is no justification for such practices i.e lotacracy, they are even deliberatly ignoring that patronizing corrupt politicians cannot make the country to be great.