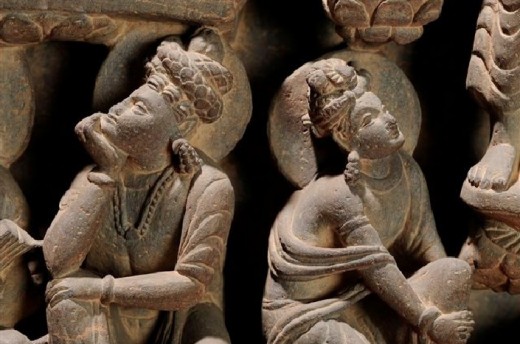 A bureaucrat, mutated into an ‘intellectual’, hogs the waves of an Urdu television channel and tells the ignorant television viewing public what it wants to hear. One of his not-so-recent gems was about the country that is now Pakistan being a wild and savage land until illuminated by Islam in the early 8th century. That, until that time, this land had no culture or sophistication. The man is a liar and a charlatan.

In April 326 BCE, Alexander arrived in Taxila and it is from that time we get the first real notice on this wonderful city. Several members of the Macedonian’s staff wrote diaries that were subsequently published. Some of those works are lost entirely, others preserved by later historians. Whatever the case, they provide a fantastic window into the city.

Taxila was a city of Buddhists and Brahmans and of yet another class that did not bury its dead. They exposed them in isolated places for the bones to be picked clean by the birds. This was a clear reference to the followers of the great Zartusht or Zoroaster — the people we today know as Parsees. We are told that the Brahmans were a very powerful class, actively engaged in the political life of the city and serving as counsellors to the court.

As for the Buddhists, Greek writers refer to them as ‘sramanes’. Clearly this was a mispronunciation of ‘sramanera’, or a new entry training to be a monk. Though there is no dearth of ruins of post-Alexander Buddhist monasteries in town, we can take this as proof of Taxila being a centre of learning even before the westerners descended upon it.

There is no notice of animosity between followers of the various religious persuasions who lived in total harmony. Taxila, if we are to believe Alexander’s general Nearchus, was a city of peace and the rule of law. Nearchus notes, with evident awe, the rectitude and decency of the townspeople who made all monetary transactions without “either seals or witnesses”. Yet the courts of law were without any cases of fraud! Mendacity was unheard of and when folks went away, either for work or pleasure, they left their homes unlocked and unguarded for theft was not known in Taxila!

The people of Taxila were admirers of physical beauty and never left home improperly dressed or made up. The men wore their beards either in white or in punk shades of bright red, green or purple. The dress, as described by Nearchus, was “an under-garment of cotton which reaches below the knee halfway down to the ankles, and also an upper garment which they throw partly over their shoulders, and partly twist in folds around their heads.”

Their shoes had thick soles to make the wearer seem taller and the clothing of the rich men was worked in gold thread and studded with precious stones. When they went about their business out of doors, attendants shaded them from the harsh Punjabi sun with broad parasols.

Polygamy was common among the rich. But parents with daughters of marriageable age and unable, because of poverty, to wed them off, exhibited the damsels in the town square. There the champions of Taxila fought boxing matches and the winner’s prize was the hand of the girl in marriage.

Arrian called Taxila “the largest [city] between the Indus and the Jhleum” and we can tell from the above description of its richer classes that it was indeed so. Sitting at a spot that made it an important staging post for caravans, it picked off large amounts in custom duties. But much of its wealth also came from its rich agriculture. According to Nearchus, there was no shortage of food in Taxila.

But the noblest aspect of Taxilian society was the respect it bestowed upon its learned men. The philosophers, whose fame had reached Alexander months before he got to Taxila, were held in the highest possible esteem by the Taxilians. They lived outside town, but whenever they wandered in, people mobbed them, oiling their hair and massaging their limbs, begging them to come into their homes so that they could hear their discourse.

Taxila was a city of high culture that valued true learning. And we have a mendacious bureaucrat pretending to be an intellectual who tells us otherwise.

Click here to post a comment
Dancing with fire: On the 1968 revolution in Pakistan led by Zulfiqar Ali Bhutto – by Nadeem F. Paracha
Basant ka Matam -by Arshad Mahmood