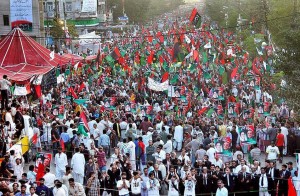 The world is changing, as we see people in many of Middle eastern countries assemble to demand their rights from the repressive regimes that have held its grips on their nations for past many decades. People in those countries are for the first time this vocal in demanding whats rightfully theirs. They want a democracy and they want it now. First Tunisia then Egypt and the domino effect continues onto many other nations.

Meanwhile as the chattering classes inside Pakistan watch this – sitting in front of their TVs in their comfortable air conditioned homes and offices – without blinking suggest the idea of a “Pakistani Revolution.” Most of whom have never stepped outside of their homes to protest or for that matter even vote in any one of the rare elections Pakistan has experienced.

Little that these – chattering classes of Pakistan – might know, what they are seeing on the TV is nothing new to Pakistan. The revolution they are so unfamiliar with, due to their social standing, actually started in Pakistan 44 years ago. It was an idea of a visionary leader – Zulfiqar Ali Bhutto – who formed Pakistan Peoples Party, the largest political entity existing till today.

Zulfiqar Ali Bhutto’s revolution was not only against the then dictator General Ayub Khan, but also against the status-quo and the elite / military establishment’s control over Pakistan’s resources. The revolution was to realize the social and economic justice and the emancipation of the disenfranchised and economically poor classes of Pakistan.

Even if the people demanding revolution in Pakistan are supporting any of the alternative parties such as Pakistan Muslim League (N / Q), Muttahida Qaumi Movement, or Pakistan Tehreek-e-Insaf, then they are not sincere about revolution. Those parties are known to be the pro-establishment and pro-status-quo parties. They are not revolutionaries. Leaders like Imran Khan, has never seen the inside of a police station, while Nawaz Sharif would never die for his principles, and Altaf Hussain will not step on Pakistan’s soil. Revolutions are not ethnic or area based, like these parties are. They are fought with fervor, struggle, and discipline which all of these parties lack.

Pakistan Peoples Party is the true revolutionary party, and it is better that we understand this sooner than later, and join the party (or at-least go out and vote for it). That is if we truly believe in a revolution. Otherwise watching revolutions on TV screens and social networking websites are not too bad of an idea, at least you get to enjoy your popcorns.