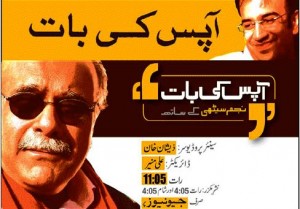 GEO TV often paints itself as the underdog, the scrapper that is crusading against the “all-powerful” President and Prime Minister.  Even if this image is laughable in the light of the billions of rupees of tax liabilities that GEO manages to avoid or the fact that it is the home of the most prominent bigots and conspiracy theorists of Pakistan posing as journalists.  Anytime questions are raised about its financial improprieties (in terms of Tax avoidance) GEO often makes up smut about the PPP government that last a fortnight and which are then proven to be fake and planted stories.

The following link has the amounts owed to the tax authorities by various media houses. Geo tops the list as of June 2010 with Rs 1.8 billion or USD 21 million approximately. Tax defaulters in Pakistani media: E&C Division-V RTO, Karachi. Please note that there is no update on the current outstanding as the government has not come up with the latest figures. One can assume that Rs. 1.8 billion would be close to Rs. 2 billion or USD 23.25 million.

Recently, GEO, under pressure to maintain a substantial grant from Voice of America (VoA) has gotten Najam Sethi as well as Dr. Maleeha Lodhi on board to provide a pseudo liberal veneer and to balance the virulent anti-American screeds of their jingoistic jihadi journos like Ansar Abbasi, Hamid Mir and Kamran Khan. Apparently, the Jang Group, one of the oldest news houses of the sub continent, has converted into a gossip mongering enterprise run by a dynasty of three generations of opportunists. Many consider it a tabloids publisher now. What is most astonishing is that the Group sees no ethical dilemmas in accepting US Government and off course their tax payers’ money to the tune of possibly billions of  while using its Jamaat-e-Islami and Taliban cheerleaders to promote US bashing as the next most popular sport amongst the urban bourgeoisie after Bhutto bashing!

The following link is about the introduction of Khabron Se Agay (in English, Beyond the Headlines), the VOA program that is run on Geo TV and now also being shown on another channel operated by a separate group. Khabron Se Agay

Last night (Feb 22nd, 2011) GEO showed us all how acute it is to irony.  For a channel that often paints itself, without evidence, as the victim of alleged (imagined would be a better) PPP suppression, it then goes on to suppress its own show with the most visible censorship!

Najam Sethi’s show suddenly went off air last night while he was talking about the media-judiciary nexus, before it resumed after approximately 33 seconds.  This certainly did not appear as a  technical fault as the viewer was subjected to the awful tuneless GEO jingle.   How come there are no such faults when the likes of Ansar Abbasi and Kamran Khan are entertaining us with their tales of Taliban romance and PPP pulp fiction?

Muzzling one’s star journalist (the token “liberal”) whilst constantly imagining itself to be under attack by a hapless government really takes the cake!   I guess it proves what many of us have been saying all along; that in the current environment one can only abuse the hapless and helpless PPP but dare not talk too openly about the establishment and its media and Judiciary proxies.  To use khaki terminology, these are “out of bound” areas and GEO, beholden as it is, NOT to public interests but to the security establishment, complied faithfully in censoring its own.

Mr. Sethi has to realize that in order to reach a “larger audience” it is important that they hear his baritone and pompous analysis and not the awful GEO jingle that is dutifully placed to edit the part of the show when Mr. Sethi goes beyond his typical politician bashing and starts highlighting the real source of the problems; the media-judiciary alliance.

Critical readers may consider why media-judiciary nexus is not talked about and that specifically on Geo can be gauged from the fact that the Sindh High Court and Supreme Court have given Geo relief related to showing of World Cup Matches on their Geo Super whilst giving confusing judgements. These judgements have been used as a ploy to hurt the interests of state owned PTV as advertisers have been reluctant to advertise on the state owned, terrestrial channel due to the confusions being created by the courts. For a detailed review of the alliance between the three Jeems (Judge, Journalist and Jornails), you may wish to consult the LUBP Teen Jeem Archive.

Transcript of the question by Muneeb Farooq and reply of Najam Sethi when the censorship took place: