Editor’s Note:  We are cross posting the following article sent to us by one of our valued supporters.  The following article from the Christain Science Monitor highlights the support for Islamofascism in a segment of society that is traditionally thought to be socially liberal. The socially liberal have been confused largely, unable to follow a certain political ideology. Their confusion is curently playing havoc with Pakistan.

The dominant narrative in Pakistan presents the Taliban as a phenomena that is caused due to poverty and “American interference”.  While these factors cannot be discounted entirely, what is being deliberately ignored is the pervasive influence of the establishment in ensuring that religious extremism is preached from every available portal and that the State itself is constructed as a bastion of militancy.

After 3 decades of State sponsored extremism that feeds on the ideological confusion that has been fostered since our genesis, extremism has become a mainstream staple of all segments of society and especially the elite class that falsely portrays itself as “Left-Liberal” and is anything but.  From fashion designers to models to rock icons, the tacit support for violent groups like the Taliban and their justifications as some sort of modern day Marxist rebels has grown exponentially and includes such apologists such as Imran Khan and Tariq Ali.

Those who now portray themselves as liberal and pretend to be sympathetic to the murder of Governor Taseer need to be held accountable for their continued participation in a dubious movement that restored compromised bureaucrats.  Even today, many of them are lashing out their impotent rage at the elected government and not at the real facilitators of extremism. 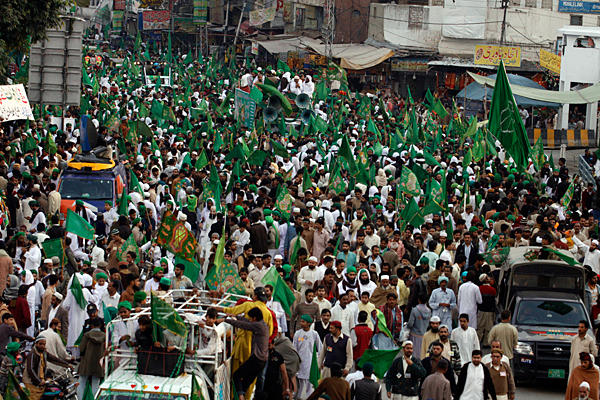 The picture above shows people participating in a rally to celebrate the birth anniversary of the Prophet Mohammad in Lahore, Pakistan on Wednesday, Feb. 16, 2011.

How a new film may help popularize fundamentalism in Pakistan – by Issam Ahmed, Christain Science Monitor

The Pakistani director of an upcoming film lauding extra-judicial killing in the name of Islam denies any similarity between his film and last month’s killing of liberal governor Salman Taseer.

Lahore, PakistanA man, a gun, and vengeance for “blasphemy.”

For Pakistanis, the scene may evoke memories of the moment liberal governor Salman Taseer was killed by his own security guard last month for speaking out against the country’s blasphemy laws, which have long been used to carry out personal vendettas and persecute religious minorities.

Instead, it’s a poster for upcoming film “Aik Aur Ghazi” (“One More Holy Warrior”) by eminent Pakistani screenwriter and director Syed Noor, which he says he plans to release within two months. And where Taseer’s killer Mumtaz Qadri was fêted mainly by lawyers and religious parties, the killer in Mr. Noor’s film, a convicted criminal, achieves redemption and hero status through murder.

Though director Noor denies any similarity between his film and the killing of Taseer, the film’s expected commercial appeal is indicative of growing acceptability of extrajudicial killing in the name of Islam, argue experts.

Both Qadri and Tariq, the fictitious hero of Noor’s film, are thick-set men with bushy beards and dark, round faces. Both men hail from the province of Punjab, the conservative hinterland. And the film tagline carries the same chilling message backed by Qadri and his supporters: “Punishment for Blasphemers: Decapitation.”

According to columnist and cultural critic Nadeem Farooq Paracha, Noor’s reputation as a “moderate Muslim” gives his work more credibility. He argues that the Pakistani media are full of personalities who, while proclaiming to represent progressive values, often espouse extreme views.

“Such people are far more dangerous than those extroverted about their fundamentalism,” he says. “These are people whose numbers have grown and who call themselves moderate Muslims: They are anything but,” he adds. In fact, he says, that’s how fundamentalism is popularized.

Director Noor, a 40-year veteran of Pakistan’s film industry (known here as “Lollywood”) is famous for a string of romantic hits with racy song-and-dance numbers featuring scantily clad actresses. Like all good Lollywood films, “One More Holy Warrior” includes a romantic love interest for the hero, Tariq “before he went to jail,” says Noor, who recently attracted attention for publicly criticizing a Muslim Pakistani actress for appearing in an Indian reality TV show and developing a love interest with an Indian actor.

“My film has nothing to do with Salman Taseer,” he says in an interview at his studio, adding: “The villain in my film claimed he was the prophet of Islam. Salman Taseer was just trying to help a woman,” referring to Taseer’s efforts to free a Christian woman, Aasia Bibi, from jail where she awaits a death sentence for blasphemy.

Critics, however, aren’t convinced. “He is making a fictional character who did the same thing as Mumtaz Qadri – how is it different? Where is the logic in that one?” says Paracha.