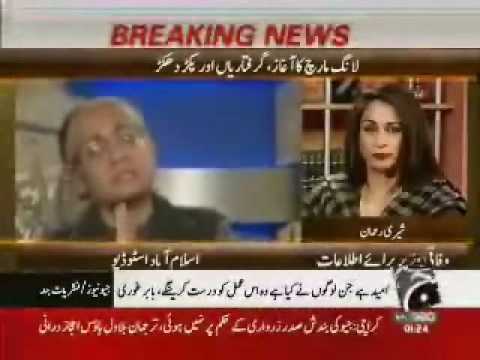 Sherry Rehman, the rebel princess of urban civil society and anti-PPP media, has been ordered to be inducted for blasphemy charges by ‘indipendent judiciary’ of Pakistan. Additional Sessions Judge Meher Nasir Hussain in Multan has ordered police to register a blasphemy case against Sherry Rehman under 295 C.

Sherry Rehman became a joint icon of the urban civil society and right-wing media when she resigned under protest as Information Minister against the alleged restrictions on Geo TV and the alleged use of police force against protesters on orders of Rehman Malik and Shaheed Salman Taseer during the military establishment’s backed movement for ‘independent judiciary’.

Today, a judge of the pro-establishment ‘independent judiciary’ has ordered police to register a case under Section 295-C of Pakistan Penal Code against the former Information Minister for uttering ‘blasphemous’ words in a TV talk show. The court issued these orders ignoring the standard procedure under which a premilinary inquiry is mandatory to ascertain the validity of allegations of blasphemy.

While the ‘independent judiciary’ has ordered her to face ‘blasphemy charges’, the mainstream media which portrayed her to be bold and outspoken rebel princess remains silent.

Sherry Rehman’s resignation and protest proved to be a serious blow to the federal government, which was trying to block way of ‘right-wing’, fake civil society (FCS) and establishment’s backed Chief Justice Iftikhar Chaudhry. Today, the ‘holy judge’ bravely stands in way of parliament from making Pakistan a secular state – the dream of Sherry Rehman and many other FCS activists.

As it is the ‘dream judiciary’ of Sherry Rehman which has inducted her for blasphemy, we have to respect the court’s decision. Perheps Aitazaz Ahsan will be proud too, as ‘independent judiciary’ sets another precedent of freedom of speech and is establishing tolerant society by charging Sherry for a statement in a TV talk show without any intention to be disrespectful towards Prophet Muhammad.

Apart from all contradictions of Sherry’s dream of a secular and tolerant society by installing the military establishment backed fanatic judges in top judiciary, let us hope that the ‘holy judge’ for whom she sacrified her portfolio as a minister and betrayed her own party will come forward to rescue her from being persecuted on the demand of fanatic mullahs.

Will Chief Justice Iftikhar Chaudhry quash case the against Sherry Rehman and earn displeasure of his support base, the jihadi mullah, right wing media and military establishment? I seriously doubt that! This is the fate of all those who want to support the establishment’s agenda of jihadism but oppose its proxy, the mullah. Sherry is not the first or last to be victim of her own contradictions.

But again, it is a decision by ‘the independent judiciary’ and ‘must be respected’. Criticism on court decisions will undermine the ‘independence of judiciary’ – were not we being told the same by Aitzaz Ahsan, Sherry Rehman and their FCS followers when it was President Zardari and other leadership of PPP being victimised by the same judiciary?

Let us support ‘independent judiciary’ and its judgments. This is the time for the pro-establishment urban civil society to happily submit to the Holy Court.  It should not object that one of its comrades, Sherry is being tried, as this is for a greater cause of achieving a ‘rightious’, corruption free and accountable Pakistan where rule of law is ensured by Iftikhar Muhammad Chaudhry – the holiest of all holies.

The question here though is whether PPP should support Sherry Rehman against fanatic judges who were installed by the military establishment with her very support and are set to get her in order to please their jihadist supporters?

Will the ‘Holy Lord’ Chief Justice, Iftikhar Muhammad Chaudhry quash the unjust case against her as she sacrificed her political career and portfolio for him? Will Aitzaz Ahsan now come out of his pothole (in Spain or Mansoora?) to plead Sherry’s case before the Supreme Court to prove that he cares about freedom of speech and constitutional rights? Will the Fake Civil Society (FCS) organise a ‘Long March’ against fanatic judges who are taking away the constitutional gurantees from citizens and have become part of jihadist movement?

In the end, it is only the PPP that can and will come to save Sherry and not these FCS hypocrites!