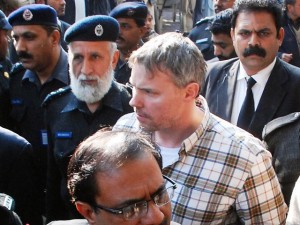 THE Ghairat Brigades are in overdrive over the Davis issue. Raucous ‘news’ items are appearing in Ghairatmand newspapers and TV channels over how even the police are convinced that the man is a cold-blooded murderer who shot two innocent young Pakistanis minding their own business on a bright afternoon at one of Lahore’s busiest traffic junctions.

Of course, as is the Ghairat Brigades’ (and their handmaiden’s) wont, truth has nothing to do with anything so long as their needs are served — in this case to fan the flames of anti-Americanism come hell or high water. As just one example, there is no longer any mention on any of the channels or newspapers about the first reports describing the two men as armed robbers who had, just prior to being shot, robbed mobile telephones from two people in the same area.

Indeed, news items told us last week that when they were taken to hospital, the two phones which had been robbed were recovered from the persons of the dead men. More than anything else there is no attempt on the part of the police to investigate Davis’s motive for killing these two heroes. From what we know, now buttressed by the CPO Lahore’s statement in a press conference that there was no self-defence involved, we can only surmise that Davis is a lunatic who just got it into his head to kill two young men in broad daylight, while he was stuck in a traffic jam.

Yes, the man should be stark raving mad to have done what he did (for no reason at all) for he could have been lynched there and then. After all, barring Somalia, Pakistan must number at the very top of the list of countries where mob justice leading to sure lynching has become the norm. Which reminds me: the traffic wardens who arrested Davis should be awarded medals for doing their duty diligently and keeping him safe from bodily harm from the mob that had gathered.

Let us take another example of the media trial of other players who have become involved in this affair, our ambassador in the United States leading, who is being pilloried mercilessly for issuing visas to Americans without informing other state agencies, specially the Mother of All Agencies.

This is poppycock of the worst kind for several reasons, the first being that all visas issued — including those without prior approval — are reported to the Ministry of Interior which then shares the lists with the other agencies concerned. It is inconceivable that an ‘agency’ that routinely causes the disappearance of people, that rides roughshod over other institutions of state, particularly civilian institutions, that roughs up and thrashes people at will, that is accused of the most vile actions in Balochistan, and that virtually dictates this poor country’s foreign policy such as it is, should not know about Davis and his fellow travellers.

It is a travesty of the worst kind to put all the blame for the various security contractors serving American needs on the present government alone. These operators first came to this country in the early days of the war on terror when the Commando was ruling the roost with the help, aid, political machinations and shenanigans of the Mother of All Agencies. If Aabpara did not know the extent of the protocols exchanged with the Americans, who did? And all this helped in American lucre in the billions of dollars being showered upon the dictator and on the armed forces. So let’s get off this one, gentlemen, shall we?

Before moving on, let me give one more example of the skulduggery at work. About two years ago a ‘scandal’ to do with a security company called Inter-risk broke in our Ghairatmand press. One of the charges laid against the then newly elected government was that it had allowed Americans, probably of the security firm then known as Blackwater, space at the Police Training College, Sihala, from where the Americans were spying on our ‘bum’ factory etcetera. It turned out that the Americans had indeed been given accommodation in the police college by the Commando’s government, kindly note, and that they were training the Islamabad police in anti-terrorism SOPs. So there.

Every anchor on our screeching channels is fatuously demanding that ayeen (the constitution) and qanoon (the law) be strictly followed when it comes to Davis, with not a thought about our sordid history of almost never following the ayeen and qanoon where it did not suit the Deep State. Recall Zulfikar Ali Bhutto’s judicial murder and his subsequent burial attended by ten people, Larkana being surrounded by a whole army brigade, and which even his wife and daughter were not allowed to attend? Now juxtapose this with the funeral of Maulana Rashid Ghazi (of the Red Mosque fame), attended by 50,000 people after his body was ferried to DG Khan via a government helicopter.

ZAB had been the elected president and prime minister of this country, who pulled it out of the bog into which it had been thrust. He gave our armed forces their pride back by banning anti-military talk on pain of imprisonment; he gave our people hope. Maulana Ghazi was a rebel against the state, occupying state property and killing the state’s servants — the police and the Rangers. Where was the ayeen, where the qanoon then? Where indeed is the ayeen and the qanoon when it comes to Salman Taseer’s murderer, to prosecute whom has become a major problem for this government because it cannot find a prosecutor?

Let the law take its course but let us at least accept that we live off America. Let us accept the fact that it has come to our aid whenever we have been in trouble, whether helping in the aftermath of the Kargil adventure or sending its helicopters to fly hundreds of sorties helping in relief efforts after our devastating earthquake and floods.