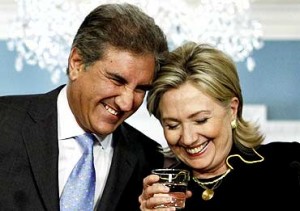 Pakistan’s (military establishment-free) media has found an overnight ‘HERO’ roughly a month after they found ‘Ghazi’ Mumtaz Qadri. Surprisingly, this time around he is from the ‘krupt’ Asif Ali Zardari’s Pakistan Peoples Party. Presenting to you: The honest, the dignified and of course the pious Mr Shah Mahmood Qureshi !

Muhammad Malick of The News (of the notorious Jang Group) was the first one to discover this hero most probably after receiving a signal from the relevant quarters when he wrote a sensational fiction piece titled ‘It’s not a rumour, Americans did get Qureshi’s scalp’.

This line of disinformation was also repeated in The News official editorial on 12 February 2011 (written by Shaheen Sehbai under the able advice of Najam Sethi):

The biggest high-profile casualties are Foreign Minister Shah Mahmood Qureshi and Information Minister Qamar Zaman Kaira. The foreign minister appears to have become the first top-level casualty of the Raymond Davis case as he was reportedly resisting US demands to declare Mr Davis a diplomat with full immunity, retrospectively. There were reports that Qureshi was offered another portfolio but he declined.

Then there is another article in The News titled: Ayatollah Khomeini’s view of immunity to foreign citizens. Strangely but not surprisingly the article completely revolves around Shah Mahmood Qureshi and Raymond Davis. While Ansar Abbasi, Ahmad Noorani, Muhammad Saleh Zaafir and several other staff members of the News are notorious for their sectarian anti-Shia tendencies, this article suggests that The News can be quite expedient in suppressing its sectarian tendencies to achieve certain propaganda gains.

Critical readers will recall that Shah Mahmood Qureshi is the same ‘Hero’ who previously made hours long speeches convincing the National Assembly on the infamous ‘Kerry Lugar Bill’ in late 2009 and was termed as a sell-out of our ‘National Integrity’ called ‘Ghairat’ to be exact by the same proxies (Jang Group etc) of the military establishment.

Coming to the Raymond Davis case, our so called independent media is quick to term him as a Blackwater/CIA/Mossaad Agent but are reluctant to expose the men he fired upon, who happened to be carrying weapons and chasing a foreigner. What’s the shame in admitting they were ISI operatives?

There are a few questions about the Raymond Davis case:

1. Who will protect the lives of people in a country where its very own elite force men from ‘Punjab’ murder a Governor in broad daylight and this shameful nation showers him with rose petals in court hearings?

2. Is law and order not a provincial subject?

3. Has anybody asked the Khadm-E-Aala Punjab about the presence of this ‘Blackwater’ Operative under the nose of his ‘Good Governance in Punjab’?

4. Raymond Davis was immediately arrested following the incident. The LHC held him in custody and the Federal Government was directed to include him in the ECL. The Government of Pakistan complied with the court’s orders and there was no move whatsoever to rescue Raymond. Why this fuss then? The case is subjudice and the courts shall decide if he is a ‘Diplomat’ or not.

5. Are Pakistan’s best Intelligence Agencies ISI and MI helpless before the ‘sell-out’ Government of Pakistan or to be exact,’Asif Ali Zardari’?

The wave of terrorist attacks against moderate Barelvis and Shias across Pakistan on Holy Shrines and Ashuras in the last few years resulted in a severe rift between the religious factions of Pakistan. All efforts of the Military Establishment failed to revive the MMA. All of a sudden Fazl-ur-Rehman left the coalition government and it was followed by a nation wide hysteria on the Blasphemy Laws, as if all other problems this nation is facing never existed. Governor Punjab Salmaan Taseer was Martyred in Islamabad by a ‘Punjab Police’ elite force commando on Januray 4th and lawyers were seen showering rose petals on a cold blood assassin in court hearings.

Sorry to say, our dear Mr Azaad Adliya (CJ IMC) is very keen on passing remarks about the Government and its functionaries in courtrooms. Where were CJ and his Ad-Hoc (Contract Employee) Mr Justice Khalil-ur-Rehman Ramday when their beloved lawyers were kissing and glorifying an assassin. A self confessing accused. Shame on us. The world has double standards with us because we have double standards for each other. Hypocrites of the highest order.

All of a sudden, the religious parties and factions are on the same page and the momentum continues. The military establishment of Pakistan ‘Needs’ and will ‘Create’ such cosmetic incidents to keep the ball rolling and eventually we shall see a PNA type ‘Revolution’ toppling an elected Government only to be replaced by an indirect Mullah Military Alliance in the name of a Iran-Egypt-Tunisia type ‘Revolution’

General Shuja Pasha, DG ISI, was named as an accused in the 26/11 Mumbai Bombings and was to appear before the US Court. It is all about settling scores. A war between the ISI and CIA. Pakistan Army has blackmailed the international community and the USA in particular too much after 9/11. Of course there is a limit to everything and i guess Obama has realized that.

Shah Mahmood Qureshi had little control over his ministry. The poor guy was barred from attending the summit at the eleventh hour on Afghanistan issue in Munich last week. We were represented by none other than our COAS General Ashfaq Parvez Kayani. Of course there was no problem with that. Who by the way questions GHQ.

God save Pakistan from Raymonds and Balckwater operatives within us!