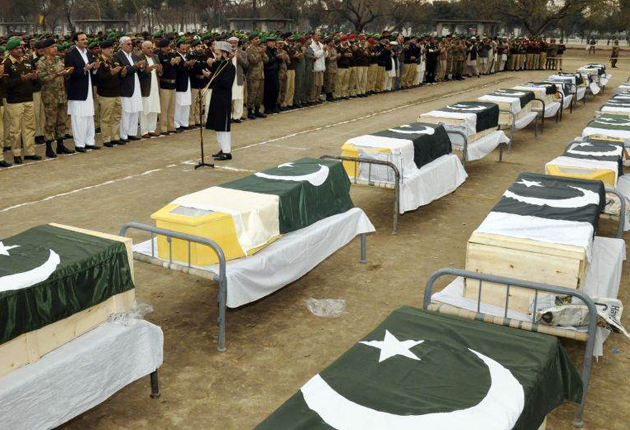 Pakistan’s army suffered a damaging blow after a suicide bomber believed to be in his teens and dressed in school uniform slipped into a military base yesterday and set off an explosion, killing at least 31 soldiers and cadets.

In an incident that triggered fears of a renewed wave of attacks and highlighted the nation’s continued vulnerability to militants, the device was detonated inside a military recruitment camp as cadets were exercising on the parade ground. More than 40 people were also wounded.

As the Taliban claimed responsibility for the attack at the Punjab Regiment Centre in the city of Mardan in north-west Pakistan, Prime Minister Yousuf Raza Gilani condemned the killings. “Such cowardly attacks cannot affect the morale of the security agencies and the resolve of the nation to eradicate terrorism,” he said in a statement.

Last night there was confusion about the precise age of the bomber. Army officials and intelligence sources said he was a young teenager, with some reports suggesting he was as young as 12. The government issued a statement saying he was 19 or 20, while the Taliban said he was a serving soldier whom they had recruited.

What seems clear is that his outfit – the navy blue uniform of the nearby Aziz Bhatti College for the children of serving army personnel – helped him slip past six separate security check-points. The attack has sparked fresh concerns about a possible new flood of attacks, as vowed by the Taliban. Analysts said that despite a series of military operations against them – the most recent taking place in the nearby Mohmand Agency – the bombing underscores the persistence of militants.

The attack in Mardan was the deadliest strike in the country since 25 December 2010, when a woman with a bomb strapped under her burqa killed 43 people at a UN food distribution point in the tribal district of Bajaur.

The strike in Mardan came on the day Pakistan and India announced they would renew formal talks that were suspended in the aftermath of the November 2008 attacks in Mumbai. One key concern will be the threat of tackling radical Islamic militants, such as those who targeted India’s financial capital with the loss of 165 lives.

In a statement released simultaneously in Delhi and Islamabad, the two countries said new talks would focus on counterterrorism, humanitarian issues, peace and security, the disputed Kashmir region and other border issues.

The statement did not say when the talks would begin but noted that the foreign minister of Pakistan will visit India by July to review their progress. The announcement followed a series of meetings between officials, most recently on the sidelines of a regional summit in Bhutan over the weekend.

Despite the announcement, few in India or Pakistan will expect anything concrete to come from the talks immediately. The neighbours have clashed four times since partition, with Kashmir being the trigger in three of the instances. However, analysts say that if the two sides are engaged there is at least the prospect of progress.

Strategic analyst C Uday Bhaskar, of India’s National Maritime Foundation, said: “I don’t think we can expect anything too quickly – we have seen what happened in Mardan today. But in itself, this is reasonably significant. Since May 1998 (when both India and Pakistan tested nuclear weapons) we have had no option but to remain engaged.”

Rise of the teenage killers

As a bloody Islamist insurgency grips Pakistan with little end in sight, a particularly horrifying trend has emerged – the use of teenage suicide bombers, kidnapped or brainwashed into making the ultimate sacrifice for the Taliban.

Analysts in Pakistan say the practice of militants recruiting schoolboys increased after the Red Mosque siege of 2007. In October 2009, a 13-year-old suicide bomber flung himself in the middle of a military convoy near the Swat Valley, killing himself and 41 others.

Although his exact age is unclear, human rights activists warn the teenager dressed in school uniform who killed 31 people yesterday at an army recruitment centre is part of a worrying new trend. “The Taliban’s recruitment of children has been pretty systematic across the board and we’re starting to see more incidents of them being used as suicide bombers,” said Sam Zarifi, the Asia Pacific director for Amnesty International.

The Washington Times newspaper has reported a trade in children as young as seven being bought and sold for use as suicide bombers. Quoting US and Pakistani officials, the newspaper said the Taliban were paying up to $14,000 (£8,700) for a child. Some stayed in Pakistan, while others were sold on to the Taliban in neighbouring Afghanistan.

The boys are taken to training camps in the inhospitable borderlands between Pakistan and Afghanistan, officials say, where they are indoctrinated in Islamic fundamentalism and violence.

Many teens join the militants willingly – there is little opportunity for advancement in the north-west tribal area, with extreme poverty and little education available, except at religious madrassas.

“Children are particularly impressionable – they are ripe for plunder,” said Mr Zarifi. In places such as the Swat Valley, a former tourist destination seized by militants before being recaptured in 2009, troops have reportedly captured many teenagers who are being indoctrinated, and some say the government needs to do more to help counter the Taliban ideology. “The Pakistani state has yet to announce an education, reintegration policy and public awareness campaigns for such children in the areas under the influence of militancy,” said Raza Rumi, a Lahore-based writer and analyst.