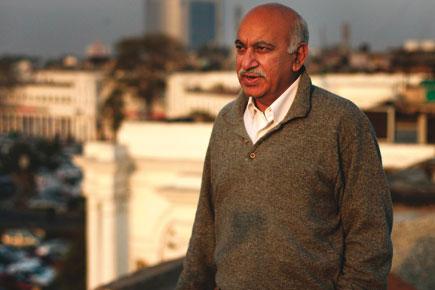 Veteran journalist MJ Akbar’s latest book is Tinderbox: The Past and Future of Pakistan, a title rendered even more relevant by the recent assassination of Salman Taseer, governor of the province of Punjab in Pakistan. The man, Akbar tells Open, would likely have been alive had he been an Indian Muslim. An interview:

Q Yours is a book about Pakistan, but it is perhaps inevitable that the dice of its formative history is cast in India. How come the two nations stand so apart today?

A One of the points made in the book is that Indians and Pakistanis are the same people. Why have the two countries moved on two different trajectories? It is because the idea of India is stronger than the Indian and the idea of Pakistan is weaker than the Pakistani. For all its weaknesses, for all its contradictions, the idea of India is essentially a modern idea. For me, modernity requires four non-negotiables. One, [the country] must be a democracy, and not an arbitrary democracy. Two, there must be secularism, and that does not mean the separation of Church and State, really—what it means is giving every faith the right to practise. Three, you cannot have modernity without gender equality. And you can see where Pakistan slips on these. Four, you must have economic equity. Not economic equality because that is not possible, but economic equity, and that is where we fail. As long as there are Naxalites, we cannot call ourselves a modern state. But Pakistan is becoming regressive. We are at least a progressive idea.

Q You have said that it is easier for India to come to terms with Pakistan, than vice-versa. Why do you say that?

A You see, Pakistan is built on a two-nation theory. That says that you, Rahul, and I, MJ Akbar cannot be in the same room without declaring war against each other. It is a stupid idea, particularly in the context of people who have lived together for a thousand years. You have to be spectacularly stupid to convert this idea into a nation. But when you want to justify that idea all the time, you need the enmity of the Hindu. [In contrast], India doesn’t need the enmity of the Muslim in order to justify secularism. In fact, India needs to sell the fact that Hindus and Muslims can live together. That is why India can have a perfect ups-and-downs relationship with Bangladesh, with Nepal, with Sri Lanka, but it is very difficult with Pakistan as it is constantly reinventing the war of 1947. That is why when you have a two-nation theory, Kashmir doesn’t remain a normal boundary dispute, Kashmir becomes an ideological ‘jihad’ for the ‘liberation of Kashmiri Muslims from Hindu barbarity’. It is really absurd.

A Pakistan’s problems are in Pakistan’s DNA. The moment you are looking for purity and a pure theocratic state, then you get your theocratic state, but what you don’t get is the definition of purity. So, which Muslim is purer? “I am holier than thou!” And therefore the Shia is impure, you have to destroy Shias, you have to destroy Bengalis because each one does not fit into your model. “And as the elite of Punjab or the Frontier, I decide what is pure. And so these low-level Bengalis are not proper Muslims!” You take Bangladesh. Bengali Muslims did not get their land after a struggle with Hindus. They got it by a struggle with fellow Muslims.

Q You also call projections of Pakistan’s disintegration highly exaggerated. You instead call it a ‘jelly state’, one that will neither stabilise nor disintegrate.

A Nation states don’t disappear once they are created. Because institutions are built to at least defend their geographical integrity. But it is probably more dangerous to be a jelly state. And Pakistan has nuclear weapons.

Q Does the current scenario in Pakistan hold any lesson for Kashmiris?

A Kashmiris have a choice whether they want to go with a modern idea… there is a lot of emotionalism, of course, and there is a history to it. But I tell you, go to Kashmir and ask a simple question, particularly to the women: “Do you want a job in Bangalore or in Peshawar?” And you’ll have the answer.

Q Let’s come to the assassination of Salman Taseer. Nobody has said a word against it. Not even the elite of Pakistan.

A It is not the reaction of the elite; it is the reaction of the nation. Indira Gandhi died a victim to a theocratic bullet. Can you imagine—a member of the minority has killed a Hindu Brahmin Prime Minister! But the nation used that moment to check any association with theocracy. Even right-wing Hindu parties. They acted by going nationalist. That is where the DNA of India lies—in a secular answer, instinctively. If Salman Taseer had been an Indian Muslim, he might still be alive.

Q You say the Taliban have created class divisions by exploiting the poor in Pakistan. Naxals, many say, have done the same in India. So, is a big middle class really a boon?

Q What is the pragmatic best we can hope for when it comes to Indo-Pak relations?

A I see very little hope because Pakistan will not and cannot abandon its two-nation theory. But really, in their thinking and policy, they must abandon the two-nation theory. They must now move away from it because it really sullies the mood of the whole Subcontinent. I think the future of Pakistan lies in the man who created the two-nation theory [Jinnah]. He walked away the moment he created it. There was nothing that Jinnah said in his speech on 11-12 August 1947 at the Karachi constituent assembly which he could not have said in India’s Parliament. Jinnah himself could have been a very proud member of Indian Parliament by temperament. He was a secular man. But he didn’t realise what he had created. If Pakistan has to survive as a rational nation, then it must really become Jinnah’s Pakistan rather than [founder of the Jamaat-e-Islami] Maududi’s Pakistan.