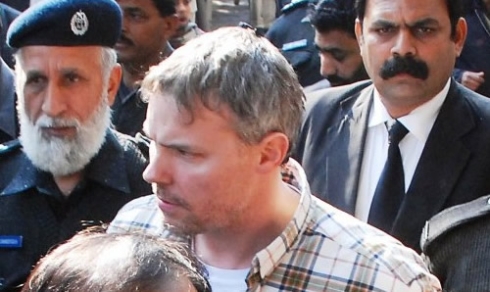 Related articles: Lahore shooting by a US national and “the legal issues to settle”: Some questions for Ejaz Haider

Legally, the fate of Raymond Davis lies with the Pakistani courts. However, for all practical purposes it is the GHQ which has been shrewdly manoeuvring the whole affair through its affiliates (mullahs and right-wing judges, politicians and media) to kill two birds in one stone, i.e., to discredit and derail the democratic government, and to settle a score with the US government on General Pasha’s summon.

The PPP-government is constrained to doing nothing as the matter of Raymond’s release is now subjudice. After being restored on the instructions of General Kayani, the “empowered” judges (under the able leadership of Chief Justice Iftikhar Chaudhry and his deputies in the Lahore High Court) have ensured that they act on behalf of the security establishment, and have a stupendous record of expanding their sphere of power into the executive and legislative domains.

Under the guise of a criticism-free and constitutionally-devoid “judicial activism”, the right-wing judges (of the Supreme Court of Pakistan and Lahore High Court in particular) have singled out the PPP for their “activism”, while their affiliation with the PMLN is even more convivial than the latter’s affiliation with the Talibanist groups like Sipah-e-Sahaba.

On the surface, the Raymond case lies with the judiciary which has to follow the law whilst paying heed to international treaties and foreign relations. Pakistan, in effect Pakistan military, cannot afford to play politics on this issue and must desist from doing so.

Similarly, the judiciary CANNOT play to the gallery of its Islamist street thug supporters. It must follow the law, recognize the realities of the situation (as pointed out by Pakistan Media Watch) and not isolate Pakistan in the comity of nations.

However, not just Raymond’s fate but his entire predicament is in all probability a part of the sparring between the current US administration and Pakistan’s security establishment. See for example the legal issues to settle post on this topic.

Let’s look at the events and incidents that have shaped this issue so far:

Just today, the liberal English daily, the Express Tribune highlighted a story that the two men killed were security operatives. Entrapment anyone?

Yesterday, the widow of one of the two men (allegedly robbers shot dead by Raymond in self-defence) was admitted to a local hospital in Faislabad due to a failed suicide attempt. After being there for nearly 10 hours and after giving a lucid statement that seems to have been tailor-made to target the hapless/helpess federal government, she finally “succumbed” to the industrial poisons that were injested by her half a day earlier. Could her death have been prevented or was it necessary once the statement was issued that placed the onus on the PPP government and the United States.

This pressure has to be viewed under the general reluctance to properly fight the (Good) Taliban and instead to save them as assets to be used in the future. More specifically, GHQ could be using this case to settle its score with the US on General Pasha’s summon by a US court.

Whatever the motive, the security establishment holds all the strings to this issue.

The PML N lead Punjab Government foolishly and expediently used the Raymond shooting incident to gain political mileage against the Federal Government by riding on the anti-US wave which has been carefully manufactured by the GHQ and their affiliates (mullahs, right-wing media, politicians) in Pakistan. The GHQ’s proxies (right wing mullahs, Islamist writers and fake civil society (in this case Imran Khan’s Tehreek-e-Insaf and Nawaz Sharif’s lawyers)) have been activated to organize anti-USA and anti-PPP rallies.

Nonetheless, the PML N soon realized that this could backfire on them as the killings took place in Punjab, which is under their provincial government and the case is in Lahore High Court; a bastion of PML N support.

Most probably under instruction by the GHQ and also responding to signal by the GHQ proxies in the streets, the Lahore High Court blocked any move to hand over Raymond to US authorities, and instructed the Federal Government to put his name on the Exit Control List.

Of course PML N also needed a face saver to back down from its stance as they cannot afford to get on the wrong side of the USA for ever. The convenient scapegoat for them was to force the deputy public prosecutor to resign from his job. For now though, both PMLN and the judiciary are playing to the whims of those holding their strings, i.e., the GHQ.

The security establishment has also thrown a bone to the rabidly Taliban-friendly Urdu media press, one of whose dons, Hamid Mir has (facetiously) suggested an Aafia-for-Raymond exchange. Nothing better could be expected from much of the English media press either as this situation is another occasion to bash their favourite target, the PPP whilst currying for more favours with the security establishment.

Aside from the Express Tribune, there is not much else in the English media discourse that attempts to explore the role of the security establishment. This is best exemplified by the narrative promoted by the likes of a top ranking English journalist, Najam Sethi, who in his premier show on notorious Geo TV placed the 90% onus and blame for mishandling this affair on the PPP government! In his column in The Friday Times, Sethi conveniently ignored the General Pasha and Aafia Siddiqi trade narrative nor did he examine the dual pressure by the army and the right wing on the PPP in this specific case. Instead, Sethi conveniently toed the ‘dominant’ narrative by placing the blame on the PPP. Sethi writes: “The federal government has been craven, inefficient and defensive to the point of opportunism.”

The Islamist parties which have gradually been re-grouped under another (informal) alliance since the last couple of months are already baying for Raymond’s blood. With the Jamaat-e-Islami in the lead, they along with Imran Khan’s PTI (an FCS organisation) are in full coordination with the security establishment to lash out at the PPP government for the imagined sin of being “soft” on Raymond.

In the end, Raymond Davis is the football that was aimed at the gonads of the US establishment in order to get them to play ball solely with the security establishment and drop even the pretense of engaging with the people of Pakistan.