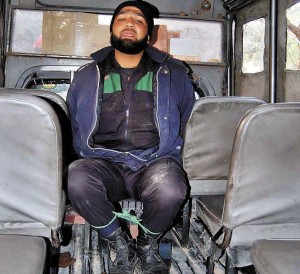 Zahid Manzoor Bajwa wasn’t exactly cop material. When police in the city of Lahore raided his house and those of associates in 2003, they found hand grenades, timers and loaded pistols. Asked about their arsenal, Bajwa and his friends acknowledged that they were planning to kidnap the son of a wealthy steel mill owner so they could buy enough explosives to kill foreigners.

Somehow, Bajwa’s two-year stint behind bars went unnoticed by security officials in Punjab province. In 2009, they made him computer section chief for the Punjab police’s intelligence wing, a post that gave him access to investigations and special reports on militant groups, surveillance directives, even security arrangements for VIPs.

Investigators now believe Bajwa downloaded secret data onto a flash drive and relayed it to the Pakistani Taliban, the insurgent group responsible for waves of suicide bombings across the country, said a Punjab security official who spoke on the condition of anonymity because he was not authorized to speak on such matters.

“Almost every important and secret document was in his access,” the security official said.

Bajwa, under arrest and charged with providing information to terrorists, exemplifies the ease with which extremists can infiltrate the ranks of law enforcement in a country where radical thinking has increasingly crept into mainstream society.

The Jan. 4 assassination of Punjab Gov. Salman Taseer provided the starkest example yet of the danger posed by radicals given a uniform and a gun. Taseer’s alleged assassin, Mumtaz Hussain Qadri, was a member of an elite police force and one of the governor’s bodyguards. Convinced that his boss had insulted Islam by opposing the country’s blasphemy law, Qadri pumped more than 20 bullets into Taseer’s back outside an Islamabad restaurant before giving himself up.

Warning signs from police officials in 2004 about Qadri’s extremist leanings went ignored, and in 2008 he was assigned to Taseer’s security detail.

The cases of Bajwa and Qadri are shots across the bow for a law enforcement community that has been lax about its screening procedures and slow to recognize the threat of extremism seeping into its ranks.

“There’s no doubt that such thinking has crept into the police,” said Irshad Hussain, a former police chief for the southern province of Baluchistan. “Senior police officials are very worried about this. They never thought such things could happen, and they’re perplexed about what should be done.”

Usually, screening involves sending a police officer to the applicant’s hometown to talk with his relatives, village elders and police. That system can work in villages where the person is known, but it’s impractical for people coming from densely populated neighborhoods in cities such as Karachi or Lahore.

Once an officer is on the force, often there is no system in place to detect whether the officer has become influenced by extremists.

“The current level of screening is not geared toward finding out the radicalized tendencies of a person,” said a Pakistani intelligence official who spoke on the condition of anonymity. “There’s a police check at the guy’s residence to see whether he has a criminal record or not. Beyond that, there’s not much more. It’s very basic.”

The task of keeping extremists and radicals out of law enforcement is even tougher in northwest Pakistan, the world’s nerve center for terrorism.

The Frontier Constabulary, a paramilitary police force that operates across Pakistan, draws its recruits from the northwest part of the country, including villages in the tribal areas where the Pakistani Taliban and a cauldron of other militant organizations control swaths of territory and enjoy varying degrees of sympathy from residents.

In 2008, Pakistani Taliban militants kidnapped Noor Jehan, a member of the Frontier Constabulary, from a tribal area town, said a Pakistani security official who asked not to be named because he was not authorized to discuss the case. Militants held him for 25 days, working on him daily and eventually persuading him to switch sides.

After his release, Jehan was assigned to Islamabad, the capital, where his deployments included the Jordanian and Egyptian embassies and the office of the United Nations’ World Food Program.

Jehan told Taliban leaders that their next target should be the WFP office and explained how the bombing should be done: The bomber should dress in a Frontier Constabulary uniform and ask a guard at the gate for permission to use the bathroom. “In this way, he could get inside,” said the Pakistani security official.

The Taliban supplied the pair with a 14-year-old boy to serve as the suicide bomber. On Dec. 1, 2009, the night before the attempt, Jehan and Gul showed the boy the house to target. The next day, the boy became confused about where to position himself. Standing near the entrance to Pakistan’s navy headquarters, he was called over by guards there.

When they became suspicious and asked him to remove his coat, he detonated his explosives. Two naval security guards died in the blast.

Jehan and Gul were arrested March 22, 2010, at an Islamabad bus stand where they were waiting to meet a 17-year-old boy they were going to use as a suicide bomber in an attack on a courthouse in the capital. When police nabbed the pair, they had a bag containing a suicide vest and a handgun.

“People who have sympathies for the Taliban are all over the country,” the Pakistani security official said. “These are poor people and they are not afraid of punishment when caught. Instead, they worry about how their families will get on with life.”

The average constabulary officer makes about $70 a month. The Taliban paid Jehan $580 for the WFP attack, $460 for the naval headquarters blast, and he was promised a 1986 Toyota Corolla, the security official said.

In the case of Bajwa, a special department-wide screening exposed him, but by that time the damage had been done. For a year, he had access to virtually every dossier and file maintained by the Punjab police’s intelligence wing. When he was hired in 2009, Punjab police failed to carry out any background check.

Authorities would not disclose what data he passed on to Taliban leaders, or how the information might have been used. But the Punjab security official said that during questioning, Bajwa made it clear where he placed his allegiances.

“Yes, I am a trained jihadi,” he told his interrogators.

Special correspondent Shahnawaz Khan in Lahore contributed to this report.

Click here to post a comment
Thank you, General Kayani and Shahbaz Sharif, for Hafiz Saeed’s speech on Kashmir Day
The Kurram conundrum — by Farhat Taj