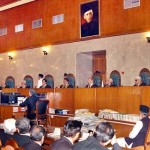 Faisal explained that in Pakistan you have a democratically elected government only 3 years in government, unlike Hosni Mubarak sitting there for 30 years. Also there is freedom to media who can on a daily basis call the government and the Head of State a “chor” and corrupt. At the same time judiciary is only targeting the current government with cases against the PPP being heard. He gave his personal example that for more than three months, his petition against Javed Chaudhry is not being heard. He even went on to say that media is sitting there to protect the judges and judges are protecting the media houses. He cited that more than Rs. 12 billion worth of tax evasion cases have been stayed by the courts. Isn’t that corruption? Similarly, those judges that are themselves PCO Judges are calling out the PCO Judges and the media doesnt want to talk about it.

The program is very interesting and can be seen here: