At another of my hang out, I wrote about this developing though fairly critical situation in Egypt, a couple of days ago. Within a matter of a couple of days, the toll on human life has increased. Almost 100 people are no more, hundreds are wounded and the situation seems to be worsening day by day. When these lines are being written, a “million man march” of anti government protesters is being organised or perhaps on its way, trying to make history.

Here the 82 year old President Mubarik, has been literally grasping to straws and trying very idiotically to prolong his doomed rule. Our “champions of faith” in our land as always, are quick to jump to conclusions and somehow find the hand of the “Capitalists”, behind such a monumental uprising.

Now, putting the two and two together, President Mubarik is supposedly a strong ally of US Government. So US Government was blamed for propping up an unpopular President Mubarik, by some of our so called “Champions.” The question to be raised is, how come for 30 long years a President can retain to his seat, by just using the “American Danda?”

The fact is that US policy makers engage people, who are the stakeholders and seem to be in control or on the saddle. The moment US gets an indication of the inevitable, the policy shift happens rather quickly. If you read between the lines of recent statements of Secretary Clinton or President Obama, it appears they are neither dis owning Mubarik and nor are they approving the pressure tactics of his government on the masses.

However on our end, from the ever enraged clergy to famous politicians, never waste a moment to target the US with their “half baked” conspiracy theories. So now the US is being blamed for staging this protest in order to topple the Mubarik regime as well. Somehow, something just not measure up. How could US government send thousands of people to the streets of Cairo and other major cities across Egypt ? 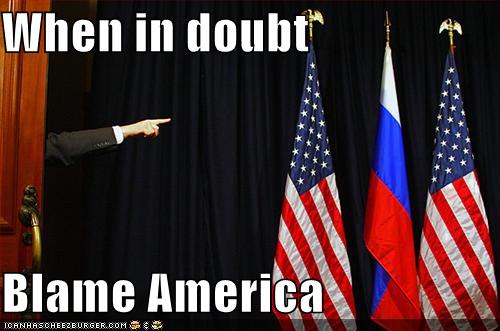 The US is our convenient Pinata to beat. It is politically correct to put the blame on the US for any and everything. Where US does not seem to fit the bill, bring in Mossad and or RAW. This is all you need to get the  rubble rousers screaming off the top of their lungs. The simple fact that always evades us, all relationships, personal or national are formed under the pretence of “self interest.” Nothing in this world is free, every thing requires an exchange.

The fact is that, people in Washington are assessing the day to day activity and preparing themselves to deal with the “new players” of Egypt. It is rather ironic to assume that thousands of aggrieved people that represent virtually every class of Egyptian society are perhaps agents of the “Evil US.” The pursuit of liberty, rights and justice are some what universal phenomena. These are basic human needs, and when people feel enraged and empowered at the same time, their movement is almost irreversible.

It is a foregone conclusion that Mubarik’s days as a President of the beleaguered nation of Egypt are numbered. Of course, he found the usual support from none other than King Abdullah of KSA, who echoed the usual “conspiracy rhetoric.” People who some how do not intend to face reality, seem to reside in a world of fantasy. Much like our illustrious leader from London, who was drawing a parallel between the Egyptian uprising and the Pakistani situation over the past weekend. One more question to ask our Brother from “Edgeware Shareef”, before I conclude. In Egypt, with such a momentous defiance, the military is on the side of the people, who will our military support, GOD forbid, if we witness such seething public rage? I think I know the answer, but it is always good to hear from the horse’s mouth.

D. Asghar is a Pakistani American. A Mortgage Banker by profession who loves to write as well. He blogs frequently at popular South Asian websites. A repository of some of his scribbles is http://dasgharspoliticalprism.blogspot.com/. He can be reached at dasghar@aol.com.