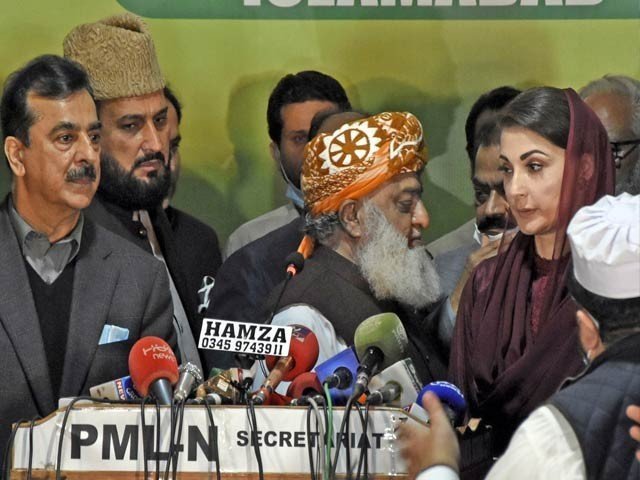 PML N wants to fight the Establishment on Twitter and wants PPP to make the sacrifice on the groundFor weeks, there have been the typical leaks about PDM discussions.

Today we know that PML N has leaked them. PML N was never comfortable about a long struggle against the Selected PTI regime. For the last 2.5 years, the only real opposition to PTI on FATF, COVID, the Economy, destruction of the public sector – has come from Bilawal and PPP.

The senior PML N leadership of Shahbaz, Khawaja Asif etc have been silent on the issues of national importance. The only time PML N speaks is when it is about protecting the party leadership.

That is not enough. Also, resigning from the assemblies, as proposed by PML N and JUI F – and opposed by PPP – is the most stupidest tactic as it leaves the ground open for Imran Niazi and the establishment. Based on the Establishment’s desperation, resigning would have lead to the scrapping of the 18th amendment and the consolidation of a “Hybrid” dictatorship under a manipulated Presidential system.

Zardari finally put his foot down on this important issue and called out Nawaz Sharif’s bluff. The problem with PML N’s “anti-Establishment” posturing is that it is just that. Posturing, Just last week, PML N cut another deal with the establishment in the Punjab Senate elections.

One could point out the voting total discrepancies in the Senate and Chairman elections and point the finger at PML N not being totally behind Yusuf Raza Gillani. After all, it was Nawaz Sharif himself who collaborated with General Kiyani, General Pasha, the ISI, (then) Chief Justice PCO Iftikhar Chaudhry in the Judicial Coup against then Prime Minister Gillani.This wall has defended Maryam Nawaz from the nasty personal attacks of PTI.

However, we are also disappointed by her recent statements. Just 2 days ago, Maryam Nawaz was silent on her party activists attacking PTI ministers. Her response to PTI hooligans attacking her own party leadership was unbecoming:“We will respond to your 1 slap with 10 slaps”When she asked for life guarantees from Zardari, it was very revealing. We don’t want threats against PML N or even PTI for that matter.

But how can Zardari give such guarantees when he himself is being dragged to courts and jail after 33 years of sham trials and cooked up cases. Also, PML N sycophants need to stop misappropriating Jalib’s dedication to Benazir and try and apply it to Maryam. Maryam is no Benazir.

And we don’t want the rogues in the Establishment to murder more of our leaders. That is what Zardari, Bilawal and PPP are trying to do which is fight this struggle politically. PML N and Fazlur Rahman have no regard for the lives of PPP Jiyalas and/or the madrassa boys of JUI F.

That does not mean that we follow their lunacy that endangers others.

The strategy of handing resignations is disastrous and poorly thought out.

I don’t know why JUI F/Fazlu and PML N/Nawaz are adamant in pursuing this counter productive strategy that strengthens the Establishment. Currently, the opposition holds less than 50 % of the seats.

Resignations will not lead to a fresh election.It will lead to bye elections and If the bold faced rigging by the establishment is any indication, they will eat up many of these vacated seats.

With another 2/3 mandate, the Establishment will scrap the 18th amendment and set up a presidential form of dictatorship.Resigning from the parliament gives the establishment space to do this and with due respect, it is either a stupid idea and/or ill intentioned.

Fully support Zardari, Bilawal and PPP on this. PPP has sacrificed 2 generations of its workers and leaders. We don’t want the same horrible fate to be meted out Maryam and Nawaz – in spite of our deep reservations about both. I don’t understand how a direct confrontation will solve anything but make the problem worse.

Furthermore, PML N does not have the political DNA to offer sacrifice of lives and jail time. And resigning is not even a sane course of action. So far, PPP and Zardari have been vindicated. They gave a bloody nose to PTI in all the bye elections and the widest vote margins were in Sindh where PPP thrashed PTI/MQM/TLP.

In Punjab, PML N was able to expose PTI in Daska. In KPK, PPP and ANP helped PML N win from a crucial PTI constituency.Sadly, some PML N hardliners have not been able to accept Gillani’s victory.

They have to get past their neurosis and immaturity and focus on the court battles to overturn the rigged Senate chairman spectacle.