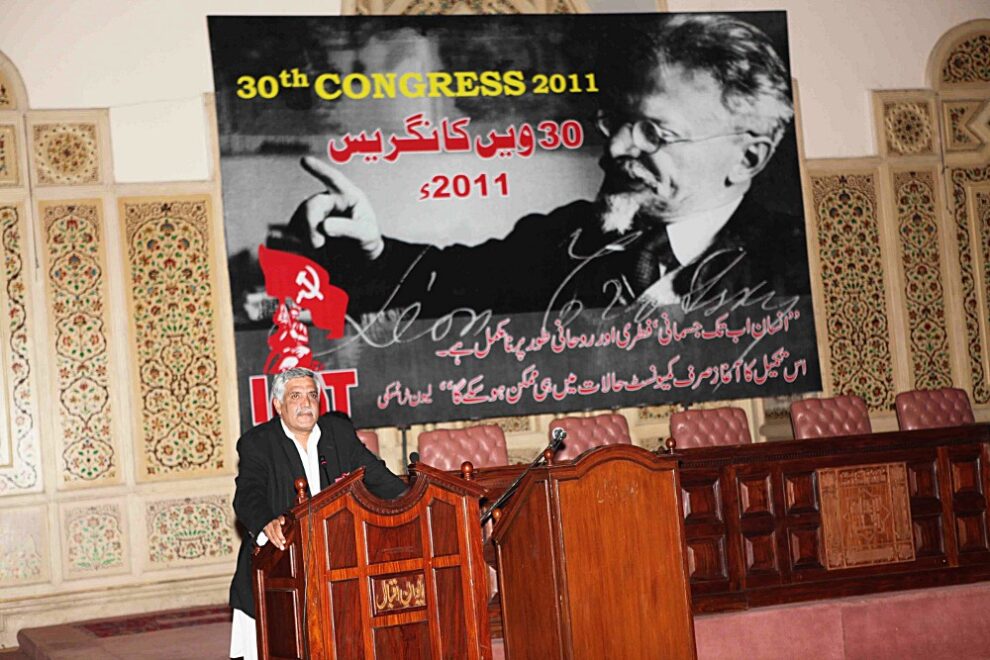 (Notes addressing Lal Khan and PPP on economics are at the end)Lal Khan, Pakistan’s most well-known Marxist/ communist, has died and unqualified rounds of praise are being advanced in his honour.

What is being reported is that he defied General Zia ul Haq’s martial law, suffered unlawful imprisonment, and kept campaigning against martial law in exile.

I am sure Lal Khan made great sacrifices like many other human rights activists during long years of martial law. Moreover, there is no doubt regarding his commitment to the Marxist ideology.

Lal Khan was more than a worker. He was a Marxist intellectual too. He wrote about Partition, Kashmir, and martial law from a Marxist perspective (I am deliberately excluding the definite “the” about his Marxist analyses). And here lies the problem, which is not of Lal Khan’s making but of the general Marxist mindset.

Lal Khan was into proclaiming grand narratives based on class war, modes of production, and unequal distribution of resources. Life, however, is often comprised of petits récits, not grands récits. In other words, grand narratives—grands récits—are often a-contextual, if not outright context-less, because they are generally based on principles and parameters touted as ‘universal’ that require few modifications.

This is what happens in the case of analyses based analytical tools provided by religion. (Hermeneutics is one of the ways out of it, but this is not my consideration now).

This is why, Lal Khan and Marxists like him could not analyse Ahmadi persecution, Shia genocide, target killing of the Baluch, the rise of sectarian-terrorist outfits, and near-deification of the army by the Punjabis. Why would the dirt poor kill the fellow dirt poor in the name of a sectarian ideology?

The Marxist has a ready-made answer: the ideas of the ruling classes are the ideas of the masses, and this is done through hegemony. The problem is: Where is the fight over the resources based on analyses of modes of production in the violence-based and violence-filled context of Pakistan? To my knowledge, Lal Khan et al have not been able to deal with this question.

I know people like Rahimullah Yousufzai have tried to provide a Marxist analysis of the violence against the Shias in the Jhang region by portraying it as a class war between the land-owning Shias and Sunni peasant.

I have dealt with this argument in my chapter on the Shia genocide in Pakistan. To conclude, Lal Khan and his fellow analysts are an instance of gross intellectual failure in dealing with the faith-based violence in the context of Pakistan.

In my view, they failed because they were narcotised by the grand narrative of the ‘universality’ that they thought Marxism afforded them. They were probably intellectually dishonest too.

No doubt PPP needs to combat neoliberalism from an economic perspective and Takfirism from a ideological perspective.My problem is that Lal Khan and Boutique Leftists types failed at both. His failure to even acknowledge Takfir has been well addressed by Abbas Zaidi sahib.

His failure to properly address Neoliberalim while acting (intentionally or not) as the Establishment’s lefty mouthpiece is also disappointing.No doubt PPP adapted to the 1990s by moving away from Socialism and going towards Neoliberalism.

But in comparison to what and how far did PPP go? When PPP was formed in 1967, the world and the region (India, soon to be Bangladesh, Iran, Arab world, Africa, South America, Europe) were in the grip of socialist movements and governments.

Socialism had popular support as a viable economic model. That many aspects of economic socialism are once again in resurgence, in response to a failing Neo liberal Western world order, is also a reality and something that PPP workers and leaders and activists need to study and acknowledge.

By 1980, Reagan and Thatcher were pushing Neoliberalism and by 1990, USSR and Yugoslavia were imploding – actively backed by NATO using Takfiris against both. How far did Benazir and PPP go towards Neoliberalism?

Benazir still gave space to the left as evidenced by her support to Jam Saqi.

It was also sections of the Left that betrayed PPP. That much was clear by the time of the Liar’s movement in 2007 when the now Boutique Left was sitting in the laps of the right wing and celebrating corrupt, Ziaist Judges.

Some of the Left had already defected to hard-right, establishment parties like PML N and MQM by the 1990s. And singing praises of right wing political movements. Just a year ago, lefty students in Punjab reciting “Laal Laal” were conflating Zardari with Imran Khan – even as Zardari was being dragged to jail on more trumped up charges.

What has the boutique left achieved for workers and farmers in Pakistan. PIA, Steel Mills and Railways have been destroyed but where was this boutique left in all this. The “corrupted” PPP has been the only tangible opposition to the destruction of the public sector.

Can they do more? Of course. But the Boutique left of the Lal Khan types are in no position to lecture PPP on this. Where were these useless lefties when BISP was attacked by the Niazi regime and when public hospitals set up by the PPP Sindh government were being taken over by PTI. PTI is actively privatising public hospitals in Islamabad.

Will the leather jacket “Lal Laal” crowd lead the protest against this? Or are they already co-opted by NGOs promoting right wing parties? We know the answer.

No doubt PPP needs to move away from Neoliberalism and privatisation and not abandon workers and labours.

But Lal Khan and the boutique left are not the reliable or even intellectually honest sources for that.