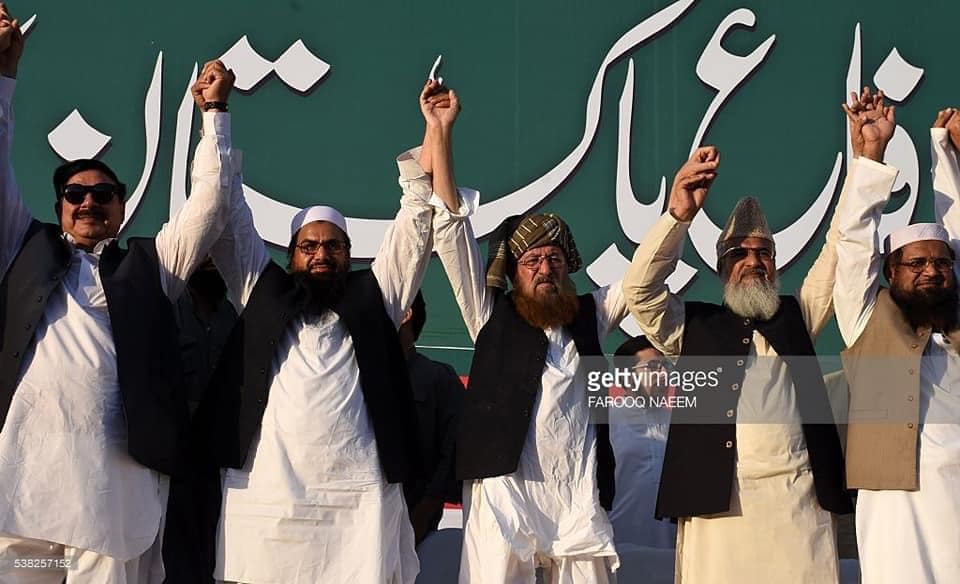 In Pakistan, those on the liberal left NGO spectrum have actively obfuscated on #ShiaGenocide. Sometimes, they misuse ethnic and Sub-National narratives to hide and deflect the Shia identity of the victims – and therefore the Takfiri identity of the Sipah e Sahaba perps.

When it was pointed out as why the notorious Ramzan Mengal was allowed to recite the funeral prayers of the late Khair Bux Marri, the same liberal left NGO crowd pounced on Independent outlets like #LUBP who pointed this out.

In the 1990s, some sections of the liberal left were busy misrepresenting the General Zia ul Haq created and Saudi-funded, Sipah e Sahaba as, “Marxist peasants”.

At other times, the same NGO sellouts used other false arguments and binaries to Dilute the intense violence faced by Shia Muslims in Pakistan.

Establishment NGO activists like #JibranNasir was often tasked by other professional activists to misrepresent this issue. At a LaTakfir conference in 2016, this Jibran character justified Shia Genocide and reduced the beliefs of the victimized communities in the same way that Zakir Naik and Farhat Hashmi do.

In another lecture at a prestigious business school, this Jibran character blamed the Shia victims of Genocidal violence for bringing this on themselves; by reciting history.

In the last decade, Najam Sethi, the Ayatullah of Pakistan’s Left Liberal “anti establishment” brigade, actively promoted Sipah e Sahaba. Najam Sethi aka #Shady was one of those who mainstreamed Sipah e Sahaba by hosting their leaders, on multiple times on his tv show and his Friday Times Blog. Shady even allowed his Friday times blog to publish hate slogans against Shia Muslims. His response when this was pointed out to him is classic double speak.

When it comes to Shia Genocide, sections of the Boutique Left and NGO liberal in Pakistan have the same talking points as Sipah e Sahaba.

Instead of taking a stand on actual economic issues such as war, inequality, healthcare, the environment etc, the Boutique Left has been absorbed by the Neoliberal elite.

It is all virtue signaling, tone policing and identity politics – unless it comes to being honest about the Shia faith identity of the victims of Genocidal violence.

In 2019, Bilawal Bhutto Zardari had warned the PTI government about its ministers hobnobbing with terrorists. Sheikh Rashid and Asad Umar responded to this valid criticism by using misogynist slurs against Bilawal.

Sheikh Rashid is now the Interior Minister and has utterly failed in addressing the concerns of the aggrieved protestors.

For the gruesome execution of 11 Shia Hazaras, Sheikh Rashid offered a sum of Rs. 1 million = $6250.00 per victim from the Federal government.

Nothing about actually punishing Sipah e Sahaba that has perpetrated this massacre and is affiliated with ISIS.

This should be an eye opener. Similarly, Bilawal should stand with the victims and offer them his full support.