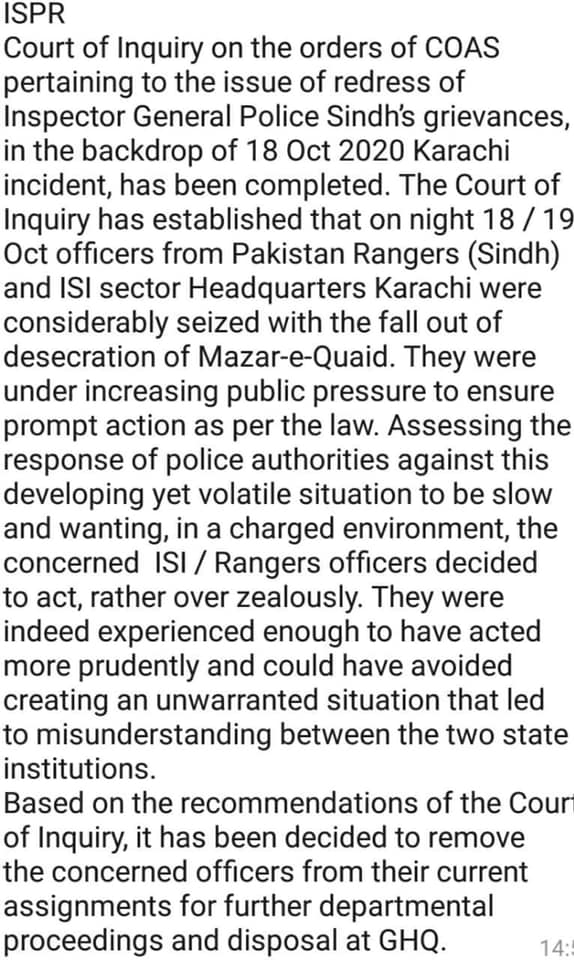 This is a big development on so many levels, it was revealed that #PTI’s #FIR against #PMLN’s Captain Safdar was fake. That the main witness was not even at the Mazar and this main witness is a relative of PTI’s notorious #HaleemAdilSheikh.

Haleem is PTI’s liason with #JDC and has pulled similar stupid and sectarian tactics in the last year. Shame on this lobby. Now the whole case has collapsed. This vindicates #BilawalBhuttoZardari and Murad Ali Shah.

also vindicates #MaryamNawaz who has NOT taken the irresponsible and petty and shortsighted view of a certain lobby that wants to divide and end PDM. This vindicates the future political leadership of Pakistan in the form of Bilawal Bhutto Zardari and Maryam Nawaz.

Pakistan’s main problem is that some morons have created a situation where Pakistan’s institutions and elected representatives have been put on a collision course. We had seen these actors make a comeback since 2007.

Then PML N paid a price (but limited just to loss of government) due to the short sighted and too-clever-by-half politics of Nawaz Sharif and Shahbaz Sharif. Bilawal and to a lesser extent Maryam (on this issue at least) give me hope. They were smart and Maryam will benefit politically by adopting the non-confrontational line of Bilawal and Asif Zardari.

This is an #AsifZardari chess move and we don’t give the man his due. It is so much easier to name names in Pakistan while sitting in a Mayfair apartment in London. It is so much harder to stay back and sacrifice. It requires more courage and patience to work WITH institutions.

This is how Push back is achieved. This is how CIVILIAN Space is won. This is a resounding slap to #NajamSethi and #HussainHaqqani who want PPP to destroy itself and its 3rd generation of workers and leaders. So that Pakistan’s institutions are destroyed, the country is Balkanized and a tattered Central Punjab is all that is left of Pakistan.

By trusting PPP, Maryam has created a proper political future for PML N as well. This has also saved Sindh’s police and showed Pakistan that PTI’s nasty tactic of pitting the police against the army is a disastrous tactic that could have destroyed both had it not been for Bilawal and Murad Ali Shah’s timely public stand.Now we will hopefully realize that the police in Pakistan is under tremendous pressure and in fact the crimes dumped on PPP, by Karachi’s “civil society”, belong else where.

This vindicates PPP for decades and is a major proof to debunk the slander against them by MQM and PTI.

This is one of multiple stories that have collapsed in the last few months. I remember how Cynthia Ritchie had her 15 minutes of fame where she made a mockery of important issues only to be revealed that she was a paid ISPR employee.

It was revealed just yesterday that PTI’s FIR on this issue, had no “legs to stand on” (friends might get this reference from 1970) But coming back to this story, our own educated and well established relatives and friends were convinced that PTI/Ali Zaidi/Haleem Adil Sheikh are the Gospel Truth.

Our families and friends repeat drawing room gossip and unsubstantiated media slander with the same authority that a neighborhood mullah uses to deliver his sermons of hate. For decades, one has listened to folks spouting the most hyperbolic and evidence-free nonsense just to feel good about their deeply ingrained prejudice.

It has lead to generations who base their personal, political, business and professional decisions on absolute BS. Was it so hard to wait for the actual details to be verified before the visceral posts?

That educated, decent, law abiding and accomplished Pakistanis are so susceptible to the most reactionary gossip has made one deeply circumspect.