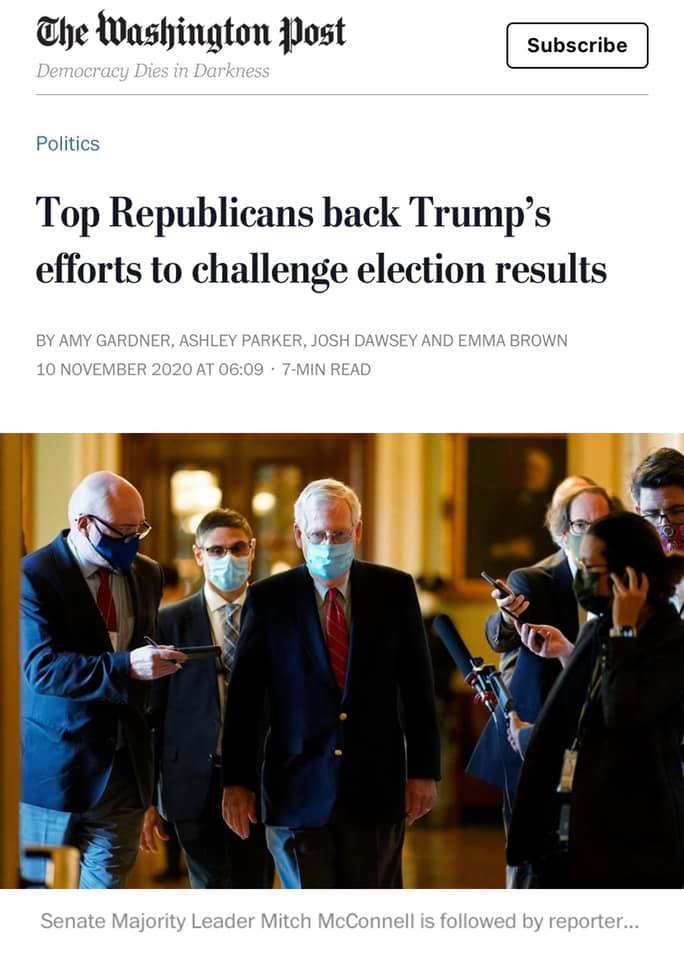 Expecting Trump, a right wing demagogue, to go out gracefully after being defeated in the 2020 elections was always a pipe dream. After all, the Democrats did their own 4 years of Conspiracy theory-based fearing mongering to deflect from their own 2016 electoral defeat.

After denying Trump his own legitimate electoral victory for 4 years, why do the Democrats expect the Republicans to behave differently.

The Democrats never accepted Trump as the president and accused him of being a “Russian Asset” – even as the Same Democrats gave him wide ranging surveillance powers and record high defence budgets!The Republican Party knows that their base is behind Trump.

Common sense and Decency would have dictated that Trump accept his defeat and move on. But Decency is about much more than polite speech – a concept that is now alien to political life. This is about politics.

Given the approximately 25 million extra votes cast in this election, Biden really has not changed the electoral map much.

In fact, the pundits and pollsters predicting a landslide victory have been proven wrong. Without Covid 19, Biden would have been defeated. Establishment Democrat losers like Spanberger are abusing and blaming the left wing of the Democrat party and are still voter shaming. But the reality is that America actually sides with the left wing economic issues like wages, income, healthcare and marijuana legalisation.

This was proven when left wing Democrats won their House races while a significant number of Centrist Blue Dog democrats lost their House seats. Florida which was won by Trump voted for a $15 minimum wage.

The Republicans will continue to back Trump because it serves their political interests. They need Trump to keep the party base energised for the Georgia Senate runoff races.

The United States will remain divided. Until a smarter populist eschews White Supremacy and addresses the real issues which are income inequality, health care, the environment and ending the wars.

These are the issues that will unite America and will require a left wing populist to combat Trump.

Otherwise, it is business as usual and a return to blowing up the Middle East even more and lighting Central Asia and Europe on fire too.