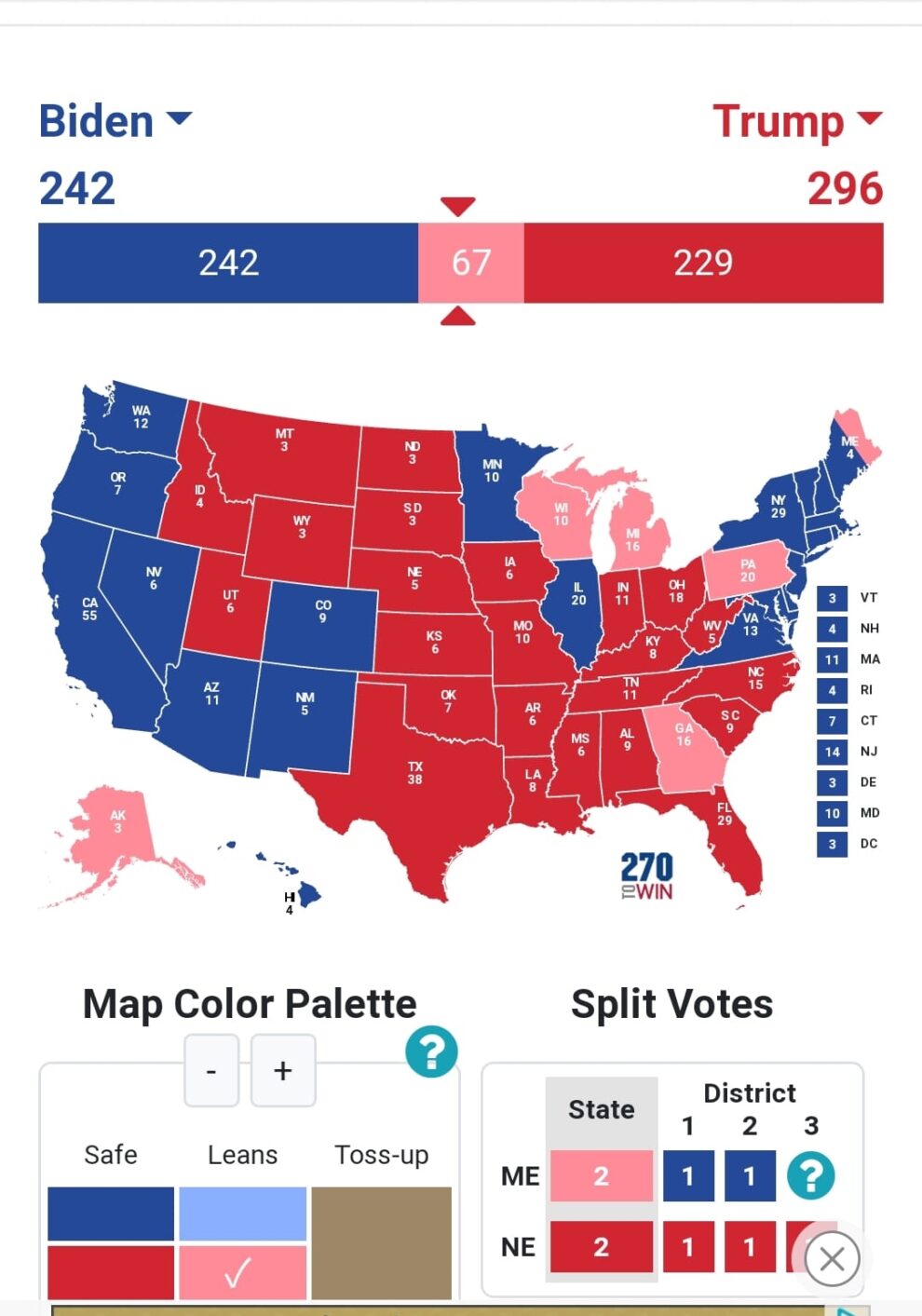 Hopefully by now we should know that pollsters and media pundits in the United States are beyond useless. As per the most recent polls before the election, Biden was leading Trump by 12-14 % nationally. So far, even the popular vote count difference between Trump and Biden is lower than 2016. And this is after record voter turnout and voting.

Trump has won Florida with significant support from those classified as “Latino Americans”. This, like many groups, including Muslims, is NOT a monolith group. It should never have been so close. Biden is likely to eke out a narrow win as he has leads in both Michigan and Wisconsin. But this is after 200,000 Americans are supposed to have died from COVID 19.

Supposed since nothing can be ascertained for sure when it is coming from this economic, military and tech superpower. It should never have been this close when the media and social media literally censored damaging corruption exposures of Hunter Biden just days before the election. Even Trump’s ardent supporters cannot defend his pathetic handling of Covid.

Clearly, the United States is deeply divided. Whether it is a Biden or Trump victory (And it is most likely a Biden victory), the rest of the planet is also waiting. Are they going to be bombed by Civil and Decent reduces Uranium bombs or the more Crass and Uncouth Trump Bombs.

The former hug you to death before poisoning the water supply for eternity. The latter just blow you to bits and do the same damage to the environment. Also, the rest of the World is wondering if their Red Sanctions are going to be Replaced by the Blue Sanctions.

The Blue Sanctions provide a sanctimonious lecture, with Persian and Syrian subtitles, of why Jefferson’s Democracy is so important in Tehran and Damascus. That’s right before Iranian and Syrian kids die because they lack medicines. The Red Sanctions have a pointed middle finger from Jared Kushner – Trump’s hands are too small.

As of now, the bets are on a Biden victory. Anything can happen and all kinds of crazy scenarios can take place. However, the Republican Party is unlikely to get behind Trump if he refuses to concede electoral defeat.

That’s because Biden’s potential cabinet is full of Republicans and Center Right ideologues in any case. Trump’s mishandling of the deadly Corona virus has pretty much sunk his prospects.

It has also shielded Biden from having to make extensive public appearances. Given his rapidly declining cognitive ability, this would have exposed Biden and hurt his chances. How does a (potential) Biden victory benefit Pakistan?Well, for starters it sinks the already precarious and floundering regime of Imran Khan Niazi.

An administration lead by Centrist Democrats and Republicans will have little sympathy for the already failing “hybrid” setup currently in Pakistan.Nawaz Sharif has approached Karzai and already has the Hussain Haqqani network for his lobbying in Washington DC.

Historicaly, Nawaz Sharif has been Washington’s “man” in Pakistan since the 1990s. But he has failed to deliver on crucial fronts including Afghanistan. There are multiple reasons for this. Nawaz has always been a Taliban sympathiser. In that regard, he is a true General Zia legatee whose ideology remains authoritarian.

Nawaz Sharif’s recent speeches continue to highlight that his beef with Pakistan’s current Army Chief is personal and has nothing to do with civilian space or democracy.

Nawaz Sharif has collaborated with multiple army chiefs to bring down multiple elected and democratic governments. Prime ministers from Junejo to Benazir (twice) to Yusuf Raza Gillani – all of them have suffered from the intrigues and back stabbing of Nawaz Sharif.

From General Zia ul Haq in the 1970s to General Bajwa in the 2010s – Nawaz has aligned with all of them. Nawaz Sharif came out with his authoritarian streak in the late 1990s when he was desperate to pass the 15th Amendment and anoint himself as a modern Ommayad Caliph.

Nawaz’s current opposition is not based on supporting democracy. It is typically based on his zero sum game against the army. Like a Taliban suicide bomber, Nawaz Sharif adheres to a Nihilist approach. And this approach is detrimental to the converging goals of both the Pakistan army and Washington DC. Which is to stabilise Afghanistan.

The Pentagon – GHQ relationship extends to several decades and will guide a potential Biden administration. So while Nawaz Sharif may feel that his prospects are stronger in the likely case of Niazi’s collapse, both GHQ and Pentagon will prefer a more moderate and sensible option that does not create more instability in the region. Currently, Bilawal and PPP provide that option.

Will the Republicans forget this? And have the Democrats learned anything at all?
Liberal Hypocrisy on Free Speech and France
Comment