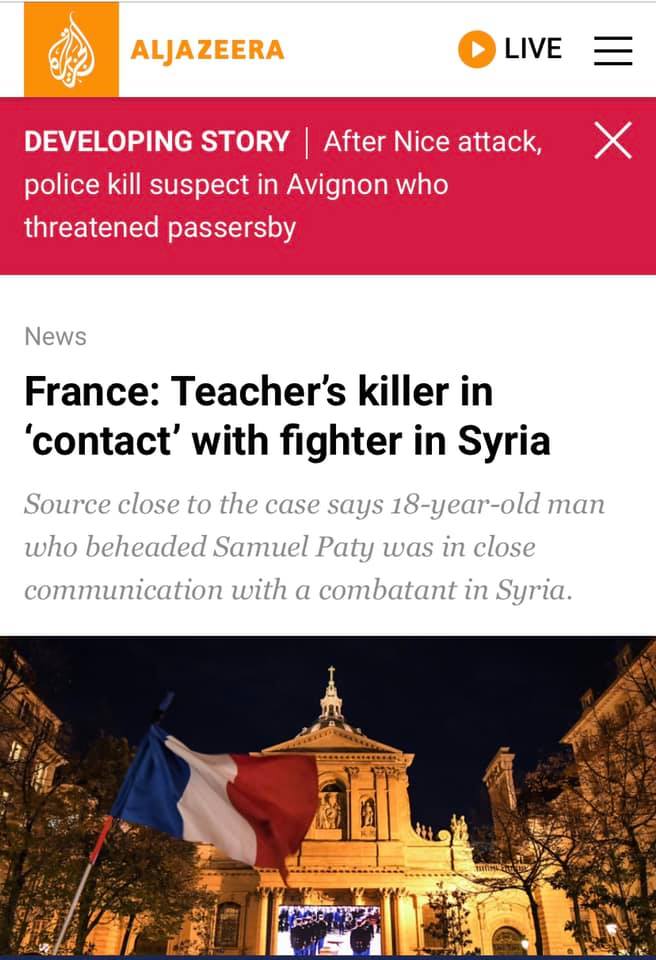 Just went through another decontextualized and dishonest article on the situation in France. Looks like liberals literally assemble their apologist articles on an assembly line and it is so easy to trace their literary DNA.

1. False binary between Niazi/Erdogan versus MacronThe reality is that both Erdogan and Macron (and Before him Hollande and Sarkozy) have supported the Wahhabi and Ikhwan head choppers in Syria and Libya.

2. The dishonest framing and juxtaposition of Free Speech with Holocaust Denial Those of us who actually value Free Speech understand that the nasty tactic of Holocaust Denial cannot be as bad as actually Perpetrating the Holocaust! France surrendered like cowards to the Nazis. Under the Vichy regime, the French were collaborators in the Nazi Holocaust of European Jews, gypsies and communists.

And the German Nazi Holocaust was one in a line of multiple pogroms and genocides of European Jews that extends back to 10th century England. Also, those Indian hyper nationalists who are capitalizing in the Wahhabi terrorism and beheadings in France have ties to those historical leaders who supported Hitler.

3. The Armenian Genocide and the Pakistan Army/Jamaat e Islami’s brutal massacres in Bangladesh in 1971. The General Yahya military dictatorship that perpetrated the atrocities in Bangladesh was backed by Washington DC.

This Revisionist construction allows Pakistan’s commercial liberals to both dilute the crimes of these dictatorships while also constructing a soft false background for Ziaist spawn like Nawaz Sharif. In the current military fight between Armenia and Azerbaijan, Israel supports Azerbaijan.

In Syria, Turkey, France and Israel are part of a larger coalition that supports Genocidal Wahhabi terrorists against the Secular government of President Bashar Al Assad. This is the main reason for the recent terrorism in France. In fact, French youth (of Chechen origin) who committed the earlier beheading is in touch with other French-Chechen terrorists in Syria who are backed by the French Government.

The average ignorant French is paying a terrible price for its government’s horrible policies in Syria and Libya. France is still supporting Wahhabi head chopping Al Qaeda affiliates like HTS against Syria. And not just France but Israel and Turkey as well. France’s own bloodthirsty record of ongoing imperialism is also scrubbed away. France’s brutal occupation of Algeria and its atrocities that include the beheading of scores of Algerian Resistance is wiped clean in these dishonest liberal articles.

4. When the Saudis beheaded leading Shia Muslim dissidents, the same liberals were regurgitating Mujahideen e Khalq’s propaganda against Iran. “Well as per our (unnamed and unverified) sources, Iran also beheads (the 2 wrongs making a right argument)”

5. The reason Pakistan has establishment installed PMs like Imran Khan and Before him Nawaz Sharif, is also based on liberal perfidy. It is after all liberals like Hussain Haqqani, Najam Sethi and Cyril Almeida who spent decades in constructing nasty slander against PPP.

The dishonesty of liberals when it comes to any issue is easy to spot in their deliberate omissions and outright lies about the issue. One wishes that these liberal opportunists actually followed their own mantra about Free Speech. Because they oppose free speech.

They oppose any alternative news sources that speak the truth about Syria. Where France is one of the leading supporters of Wahhabi terrorist groups like Al Qaeda. And that the terrorism in France is a direct blow back of their disgusting policy of backing head chopping Salafi maniacs in Syria and Libya. Liberals in Pakistan oppose free speech when it comes to Assange.

When it comes to those UN-OPCW whistle blowers who have debunked the chemical attacks blamed on the Syrian government of President Bashar Al Assad. Liberals in Pakistan even oppose Free Speech that serves as an alternative to Takfiri ideology.

Before lecturing to others about Free Speech which many of us valued for a long time, why don’t they ask France why French murderers are in touch with French backed Al Qaeda affiliates in Idlib!!“Le Parisien newspaper reported on Thursday that Anzorov’s suspected contact had been located through an IP address traced back to Idlib, a rebel holdout in northwestern Syria.Idlib is controlled by the Hay’et Tahrir al-Sham (HTS) group, formerly al-Qaeda’s Syrian branch, but has also become the refuge for several splinter groups.”

US Elections and its ramifications for Pakistan
Why Robert Fisk was a thorn in the side of Neo-liberals? – Aamir Hussaini