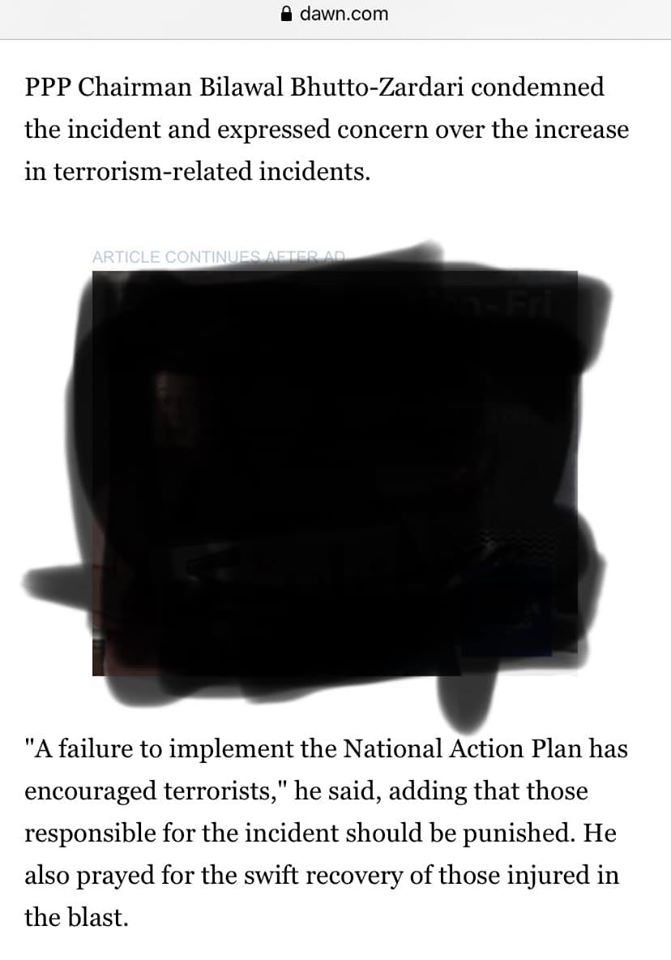 “In 2017, nearly 132 people were killed and 460 others wounded in five militant attacks in Parachinar. In previous years, militants had carried out 11 bomb attacks that left over 500 dead.”

Parachinar has been targeted since the 1980s during the military dictatorship of General Zia ul Haq. The Pashtun Shia populations as well as significant sections of #Pashtun Sunni populations were never really as gung ho about being used as terrorist proxies as the Lahore and Karachi intelligentsia misrepresented them to be.

Parachinar is the biggest contradiction to this establishment propaganda which has been peddled by the likes of Nawaz Sharif and Imran Khan and opposed from the beginning by ANP and by the late 1990s by Benazir and the PPP.

But Pakistani liberals, sponsored by #NawazSharif and PML N cannot accept this reality and try and misrepresent it.

In one of the worst terrorist attacks that took place in Parachinar in 2017, Nawaz Sharif as the prime minister was not even bothered to issue a condemnation. Sadly, #AsmaJehangir took her own time to issue a condemnation tweet nearly a week letter. She was more focussed on saving Nawaz Sharif after his family’s choice real estate assets had been discovered in London. #Malala’s discourse on Parachinar has also been most disappointing. She was targeted by the same Takfiri forced that have massacred hundreds of Pashtun #ShiaMuslims in Parachinar, Kurram Agency.

Similarly, the Pashtun Tahafuz Movement don’t seem too concerned about the Tahafuz of the Shia Pashtuns of Parachinar. (Would welcome a rebuttal to this particular assertion if any)

On the other hand, speaking out against Takfiri terrorism has been one of the central planks of Bilawal Bhutto Zardari since his emergence as the de facto opposition leader in Pakistan.

If any leader in Pakistan has been clear, it has only been Bilawal, Zardari and PPP. For his clear stance against terrorism and #faithbasedviolence Bilawal has been relentlessly abused and slandered by PTI. Civil society is more amused in mocking his Urdu accent instead of appreciating his brave discourse on this crucial matter of literally life and death