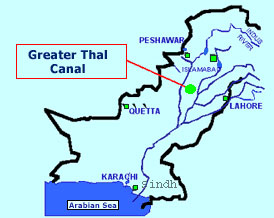 Greater Thal Canal is yet another crime against Sindh. The basis of 1991 Water Accord was the 1977-82 actual average usage in 10 daily blocks. There was no Greater Thal Canal in 1977-82. Hence, there could not have been actual usage of the canal in that period. But when Punjab presented its 10 dailies, Greater Thal Canal was sneaked in the list. Sindh objected and, as usual, Punjab prevaricated till opportunity arose under General Musharraf’s military government to regularize the injustice. The canal is being built “on war footing” to present it as fait accompli.

There are recognized international laws governing division of water between riparian states. Even Pakistan’s Constitution accords special guarantees under Article 155 to riparians. One internationally recognized legal point is that on the same river the irrigation projects built first have more right than the ones completed later. Chashma-Jehlum and Taunsa-Punjnad link canals are constantly drawing water away from Indus towards Punjnad and Islam Barrages when Sindh barrages, on Indus Main, face acute shortage of water.

People of Sindh keep complaining about this injustice but, again, to no avail. Another internationally recognized law is that an upper riparian has no right to draw water from a common river until and unless lower riparians give their consent.

Sindh’s argument against Greater Thal Canal, or any other mega water project, is very simple that there is not enough water in the system for another dam or canal. The quantum of water flowing in Indus River System is very erratic. The highest flow, recorded in 1959-60 was 187 MAF whereas the lowest recorded was 91 MAF in 2001. With such wildly erratic flows, planning mega projects on average flows is either pure deception or yet another mistake of Herculean proportions.

Common sense, international criteria and even Wapda’s recommendations demand 80 per cent, or four out of five years, availability for mega projects. The average for the last 80 years may be about 135 MAF but four out of five years water availability is only 123 MAF. If the 1991 Accord allocates 117.35 MAF to provinces and at least 10 MAF needs to flow downstream Kotri for the health of Indus Delta there is no water for storage or for another canal.

The last four year’s flows best illustrate Sindh’s objections. The total water in the system was 117.5 MAF (1999), 96.5 MAF (2000), 91 MAF (2001) and 111 MAF (2002). If there was a Greater Thal Canal and two million acres were under plough, would the owners sit home for four years or would they force the gates of Greater Thal canal open, much as was done with Chashma-Jehlum? And what will happen if 10 or 20 years from now a dam is built on river Kabul inside Afghanistan, as one day it must? The consequences for Sindh will be horrific.

In the eyes of the people of Sindh the only solution to the dispute is to shift emphasis from development to conservation of water resources. Money should be spent on modernizing Pakistan’s creaking irrigation network and lining all watercourses, minors and canals passing through Sindh and southern Punjab where the underground water is very saline saving enormous quantity of water rather than build a Rs30 billion project that Sindh will never allow.

This just happened after an hour’s rainfall in “destroyed” “Zombie Land” “Sindh”, I believe the area is called Lahore
A poem which banned the creater’s all poetry in the Assam India – by Aamir Hussaini