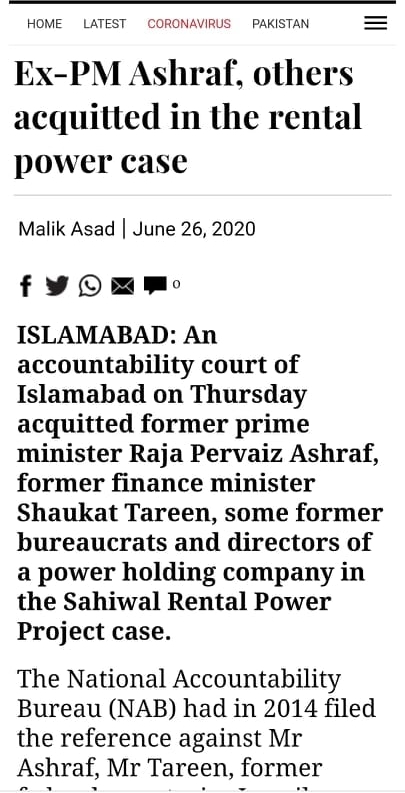 “Rental Raja gets the spot, for now” was headline of the news published in daily Dawn

“Rental Raja gets the spot, for now” was headline of the news published in daily Dawn on June 21, 2012.Report was filed by Amir Wasim.

“Raja Parvez Ashraf managed to scrape past thefinishing line and end up as the ruling party’s designate for the post of Prime Minister”, added Aamir wasim in his filed and published news in the dawn.

[“ Raja Rental” , as he is popularly known, is association in popular imagination with incompetence and corruption…………….. and for his alleged corruption in the infamous rental power projects……..]

Dawn media group published the news about acquittal of Raja Parvez Ashraf and others by the NAB court on June 26,2020 and it can be read on official website of Dawn media group at link:

But only Dawn media group had not published, on-aired unethical reporting against PPP and Raja Parvez Ashraf in the context of Rental Power Projects but our all mainstream media groups’ TV channels, newspapers, official websites were repeating same unethical practice while making report on Power Rental Projects cases. Geo News, daily Jang of Mir Shakeel-ur-rahman was also among those media groups, who were running a propaganda campaign against the PPP and its leadership on Rental Power Projects.