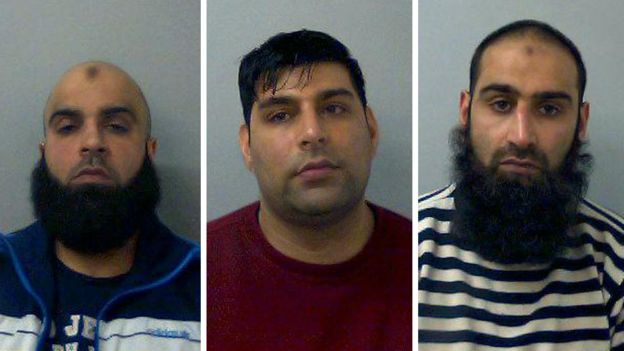 It is a “not in my name” moment for the British Pakistani community. Muslims should not be apologetic or confused about the sexual abuse grooming gangs. Misuse of Islamophobia narrative is an enormous dis-service to Muslim community, especially for rape.

This is deplorable. It leads to “boy who cried wolf” scenario. Being apologetic about these grooming gangs is a logical fallacy like being apologetic about terrorists. Instead, Muslims should come out to support the survivors, arrange protests and campaign for justice.Opinions should not be criminalized but racial/religious hate-inspired sexual grooming and trafficking need to be properly criminalized.

A thorough study and new legislation is needed focusing on cases of sexual abuse/violence carried out by more than one perpetrators involving ideology-based mental/emotional abuse.

The predominantly Pakistani-Britisher grooming gangs involved in organized sexual abuse in the UK need to be understood in their own frame of mind. There are 8 pillars of this form of abuse: –

7: They are not pedophiles

8: They only represent a tiny group of Pakistani Muslims

Years of sexual repression had damaged thempsychologically. The anti-masturbation-ism is basically a part of a holy war on science. Mosques have, unfortunately, become centres of darkness and pseudo-science. The Imams either never have gone to a modern school, or follow someone who never went to modern schools.The anti-science being spread by mosques and religious preachers should be taken seriously by the Muslim community itself and the government. It is as alarming to see European Muslims going to “Ruqya” (exorcism) services as it is to see the higher rate of EU Muslim joining ISIS. For those who want to read more about a war on science in modern Muslim countries waged by religious bigots, I would recommend this book: “Islam and Science” by Pervez Hoodbhoy. It can be downloaded free of cost from this link:

The government should introduce compulsory course on “history and philosophy of science” for Imams of Muslim mosques. Those who fail must lose jobs. Imams are already offered free language courses. A course on “Sex Education” and “History and Philosophy of Science” is more important.

Racism is not genetic trait. You learn and choose to be racist and anyone can be. It isn’t necessarily the demographically dominant community that the racists belong to. It is also important to understand that not all Muslim expats are racist towards white people. Racism in South Asian communities is a modern phenomenon. When the Europeans started to go to the Indian Subcontinent 500 years ago, then ruled by pluralistic Mughal empire, they wrote diaries. They didn’t report any racism there, they traded freely and they got jobs in King’s army, etc. Hindutva and Deobandi Islam, both fascist ideologies, emerged around 100 years ago.

They saw religion as a nation state. Unfortunately, Gandhi and Congress tried to strengthen the JUH and Ahrars to weaken the secular minded Muslim league. It made the Deobandi element stronger, and also created gap between Congress and modern Muslims. In the name of resistance to colonialism, the JUH and Ahrars promoted anti-white racism and anti-science ideas. After partition, Jinnah appointed a Hindu as his law minister not the celebrated Deobandi scholar Shabbir Usmani, but after his death the Deobandi “islam-is-state” ideology overtook Pakistan. Two nation “theory” was presented as two nation “ideology” because both translate as “nazariyah” in Urdu language and the secular elements became weaker over time.

Because of lack of proper legislation, the perpetrators are bold and confident that they will get away with it. Ordinary Muslims have families to look after. They could not confront the gangs when police and justice system failed the victims.

It works like an ideology-based cult. Many abusers referred to Quran or south Asian cultural norms to justify their cruelty. Most of the times they fabricated Quranic teachings but sometimes they actually quoted Quran. Quran is a medieval book and it can be interpreted in different ways but it is clear about one thing: no sex outside marriage, not even with a non-Muslim. Yes, it permits sex with prisoners of war and this is what ISIS did to Yazidi girls, but UK isn’t a war-zone and we are not living in the dark ages.In some cases, the medieval Islamic permission of beating one’s wife if she was caught cheating, was quoted to justify sadistic beatings and torture for sexual arousal.

It is important to note that the verse is not meant for sexual torture and among Islam’s holy personalities, only the second Caliph Umar is reported to be physically abusive towards his wives. Prophet or the People of the House or other three Caliphs are never reported to have beaten their wives.Muslims are a diverse community; many wonderful Muslim men don’t beat their wives. Some Muslim men are actually beaten by their abusive wives, although it is a taboo subject.

It is important to note that while polygamy is permitted in Islam, it is not common because it is impossible at large scale: there are as many women as men in Muslim countries because of laws of statistics.  Children’s gender is a binary variable, it is either a male or a female. Each with a probability of one half. So a large population of children born shall have equal numbers of boys and girls. In history, only elites practiced polygamy.

The Concept of Virginity and Sexual Purity:

This is one important factor. Thinking that the white girls won’t be virgin made these grooming gangs feel less guilty because they thought virgins were superior humans. This is the reason why no Muslim girlfriend would have sex with them.In Islam, losing virginity isn’t a crime itself. Unlike Christianity, Islam has lesser sentence for unmarried people having sex, i.e. 100 lashes.

We need to know these things to put it in right perspective.Some sects in Islam actually allow temporary marriage between boys and girls, kind of girlfriend boyfriend culture, which essentially means they can lose virginity before proper marriage.The protection of virginity is a cultural thing, not a religious one. The Shia school allows “Mut’ah” (temporary marriage), and it is getting common in the UK, but still many don’t practice it because of culture of virginity.

Another concept is the covering of body. In south Asian and middle eastern societies, people had to cover their body with cloth to avoid sun-burns, andthis is how the concept of covering one’s body entered Abrahamic religions. Cloth was scarce until recently when industrialization made it available for everybody, people had only few pieces of cloth to half-cover the body. Only elites could afford a full-body dress. The present obsession about covering one’s body completely is new in Muslim world too. When Muslim religious scholars learned about European girls going to beach with minimum clothing, they could not know that it was for vitamin D, they associated it with them being shameless and honour-less. Vitamin D deficiency is not noticed in South Asia because there the sun burns the skin if people don’t have layers of clothing. Men wear turban when it is 45C.

Don’t confuse the grooming gangs with terrorist organizations. While there are similarities, there are differences too. They have no political purpose. These gangs don’t have central command. Their members fear death, prison and getting exposed. They are not dangerous but cowards. They can’t harm you, especially when they have been exposed to the public. Perhaps all victims considered their abusers dangerous and feared them, this emboldened them.

They shouldn’t feel invincible. They weren’t dangerous or courageous like mafias either, but they behaved like them in private hiding places to engineer their victim’s thoughts. While they seem to work like a terrorist gang, they are in opposite direction and if the terrorists come to know how they fabricated Quranic verses, they might target them for distortion in the Holy Quran (Tahreef).

They are not pedophiles: They are organized, have gang-power behind, belong to same race and religion, their targets include girls in their late teens and 20’s. Calling them pedophiles is misleading, it is the same mistake as ISIS and Muslim Brotherhood were labelled fighters for democracy and liberty.

They only represent a tiny group of Pakistani Muslims:

They need to be isolated from the larger UK/EU Muslim community. Activists need to acknowledge the diversity in Muslim community and distance themselves from Neo Nazis, Hindutva missionaries and others who want to exploit survivor’s ordeal for their ideological goals. This won’t achieve anything. Similarly, religious polemics targeting Quran and Islam would force Muslims to indulge in counter polemics. You have limited time, manage it well.Don’t police those who want to support you, don’t put too much conditions. Asking Muslims to first denounce Islam before they support you isn’t going to work.Imagine Palestinians asking Christian supporters to first denounce the bible.

It is also important to write your stories and make them available for people to read. Try to provide details and names of the abusers. While writing, try to keep calm and unbiased and state the facts as they are. I am sure there are Muslim victims too, who are not speaking up for the “honour” of their families. They should come out.