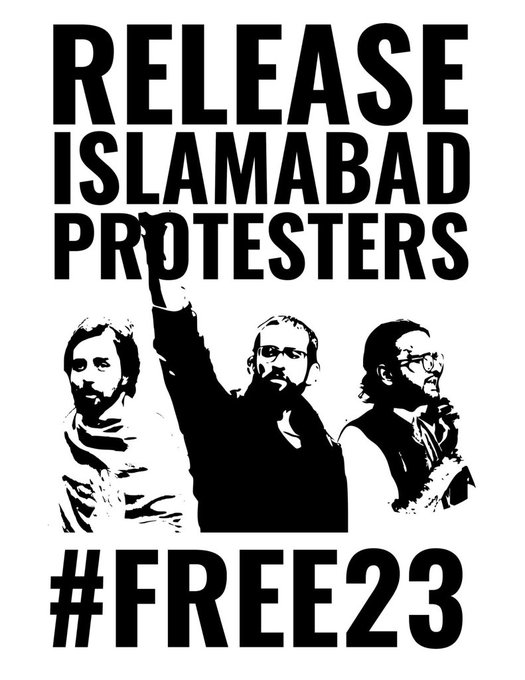 In four provinces, GB, PH Kashmir freedom of expression, freedom of organizing the peaceful gatherings for rights, to hold a rally or sit-in against human rights violations made by thugs sitting in state institutions didn’t remain easy tasks, if you come out and expose the thugs in state and their committed violations, it may be that either you will be enforced disappeared or beaten by ‘Namaloom’ or will be arrested under Criminal Conspiracy and Assault or Conspiracy against the State ( Particularly under 123A, 124A).

Either you work for social justice, or you demand for economic emancipation from poverty, non-permanent status of your job, joblessness, increasing the cost of education, cuts in health sectors, inflation , displacement through so called development projects , or displacement and uprooting through Lavish Housing Schemes for elites like Karachi Bahria Town, DHAs, Pak Fazaiya Housing Schemes, or you oppose Proxy Wars, Military Operations, Increase in Defense Budget.

You raise your voice over extension of Army Chief, over enforced disappearances , extra-judicial killings, over media censorship, even you translate a Novel published 11 years before in English into Urdu, in which you used art of stair while manifesting a dictator who had not only broken the constitution but he had divided our society bitterly along with the lines of ethnicity and sects, addicted millions of people of drugs, trolling brigades attack on you while calling you ‘Traitor’, ‘Security Risk’, ‘Bay Deen'(Apostate) , Agent of RAW or CIA or Afghan DNS, After your trolling some table-news stories are surfaced on the earth in which false things in the name of revelations are mentioned and then it has been requested to FIA, Armed Forces, ISI, MI, IB to come in action against the supposed traitors or agents of RAW or Afghan DNS.

Then either you are enforced disappeared or Police comes in action and arrest you under sedition charges. Persons arrested under such charges face worst character assassination Campaign, worst trolling on social media, worst censorship. They are not allowed to present their position through mainstream media but propaganda against them on mainstream media and social media continues non-stop.

We have seen all such nasty things in past. In era of Zia dictatorship when no newspaper can’t publish positive report about the activities of PPP and other pro democratic parties and to project or to give coverage of Bhuttos had been strictly banned then it was BBC or Radio Moscow’s Urdu Service which People of Pakistan had used to listen through Radios and they believe whatever had been broadcast-ed. It is fact that such web of censorship couldn’t stop the people from struggling for their rights and raising their voice against oppression and suppression.

At this time it is need of current situation that broad-based democratic rights movement should be built around the demands which are being made by different sections of our society. All citizens should be united on a charter of demands. Such Movement should be built which rejects Neo-Liberal model of state, which reject cuts-austerity regime and which rejects all types of discrimination. We can’t win the struggle of our rights in isolation, we are facing most oppressive form of regime today, so all victims of this system will have to unite and to fight against injustice and oppression collectively.