Israeli Channel 10 News published a leaked diplomatic cable sent to Israeli ambassadors concerning recent events in Lebanon and Saudi Arabia which, according to Zerohedge, began with Lebanese Prime Minister Saad Hariri’s unexpected resignation after he was summoned to Riyadh by his Saudi-backers, and led to the Saudis announcing that Lebanon had “declared war” against Saudi Arabia.

Zerohedge notes that “the classified embassy cable, written in Hebrew, constitutes the first formal evidence proving that the Saudis and Israelis are deliberately coordinating to escalate the situation in the Middle East.”

This is a EXPLOSIVE thread that proves how Saudi and Israel are deliberately coordinating to escalate the situation in the MidEast.

This is a EXPLOSIVE thread that proves how Saudi and Israel are deliberately coordinating to escalate the situation in the MidEast. https://twitter.com/BarakRavid/status/927629611713941505 …

1 \ I published on channel 10 a cable sent to Israeli diplomats asking to lobby for Saudis\Hariri &against Hezbollah http://news.nana10.co.il/Article/?ArticleID=1272790&sid=126 …

633 people are talking about this

– On Sunday, just after Lebanese PM Hariri’s shocking resignation, Israel sent a cable to all of its embassies with the request that its diplomats do everything possible to ramp up diplomatic pressure against Hezbollah and Iran.
– The cable urged support for Saudi Arabia’s war against Iran-backed Houthis in Yemen.
– The cable stressed that Iran was engaged in “regional subversion”.
– Israeli diplomats were urged to appeal to the “highest officials” within their host countries to attempt to expel Hezbollah from Lebanese government and politics.

As is already well-known, the Saudi and Israeli common cause against perceived Iranian influence and expansion in places like Syria, Lebanon and Iraq of late has led the historic bitter enemies down a pragmatic path of unspoken cooperation as both seem to have placed the break up of the so-called “Shia crescent” as their primary policy goal in the region. For Israel, Hezbollah has long been its greatest foe, which Israeli leaders see as an extension of Iran’s territorial presence right up against the Jewish state’s northern border.

The Israeli reporter who obtained the document is Barak Ravid, senior diplomatic correspondent for Channel 10 News. Ravid announced via Twitter…

1 \ I published on channel 10 a cable sent to Israeli diplomats asking to lobby for Saudis\Hariri &against Hezbollah http://news.nana10.co.il/Article/?ArticleID=1272790&sid=126 …

613 people are talking about this 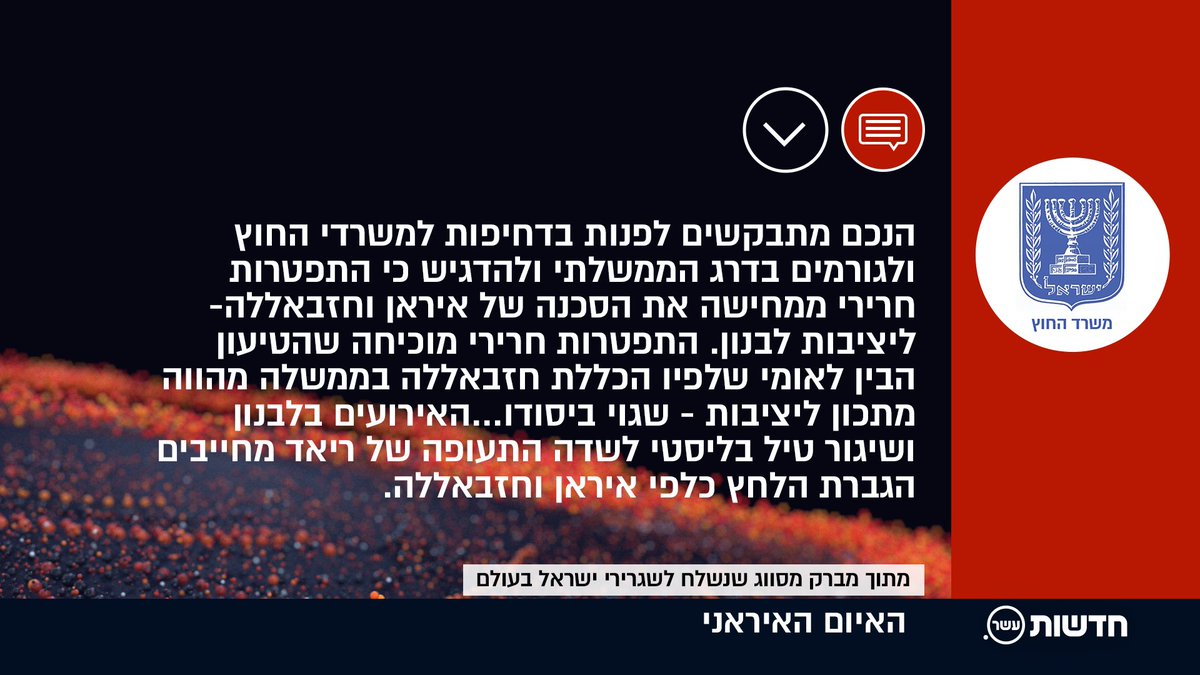 “To the Director-General: you are requested to urgently contact the Foreign Ministry and other relevant government officials [of your host country] and emphasize that the resignation of Al-Hariri and his comments on the reasons that led him to resign illustrate once again the destructive nature of Iran and Hezbollah and their danger to the stability of Lebanon and the countries of the region.

Al-Hariri’s resignation proves that the international argument that Hezbollah’s inclusion in the government is a recipe for stability is basically wrong. This artificial unity creates paralysis and the inability of local sovereign powers to make decisions that serve their national interest. It effectively turns them into hostages under physical threat and are forced to promote the interests of a foreign power – Iran – even if this may endanger the security of their country.

The events in Lebanon and the launching of a ballistic missile by the signatories to the Riyadh agreement require increased pressure on Iran and Hezbollah on a range of issues from the production of ballistic missiles to regional subversion.”

Thus, as things increasingly heat up in the Middle East, it appears the anti-Iran and anti-Shia alliance of convenience between the Saudis and Israelis appears to have placed Lebanon in the cross hairs of yet another looming Israeli-Hezbollah war. And the war in Yemen will also continue to escalate – perhaps now with increasingly overt Israeli political support. According to Channel 10’s commentary (translation), “In the cable, Israeli ambassadors were also asked to convey an unusual message of support for Saudi Arabia in light of the war in which it is involved in Yemen against the Iranian-backed rebels.”

All of this this comes, perhaps not coincidentally, at the very moment ISIS is on the verge of complete annihilation (partly at the hands of Hezbollah), and as both Israel and Saudi Arabia have of late increasingly declared “red lines” concerning perceived Iranian influence across the region as well as broad Hezbollah acceptance and popularity within Lebanon.

What has both Israel and the Saudis worried is the fact that the Syrian war has strengthened Hezbollah, not weakened it. And now we have smoking gun internal evidence that Israel is quietly formalizing its unusual alliance with Saudi Arabia and its power-hungry and hawkish crown prince Mohammed bin Salman.