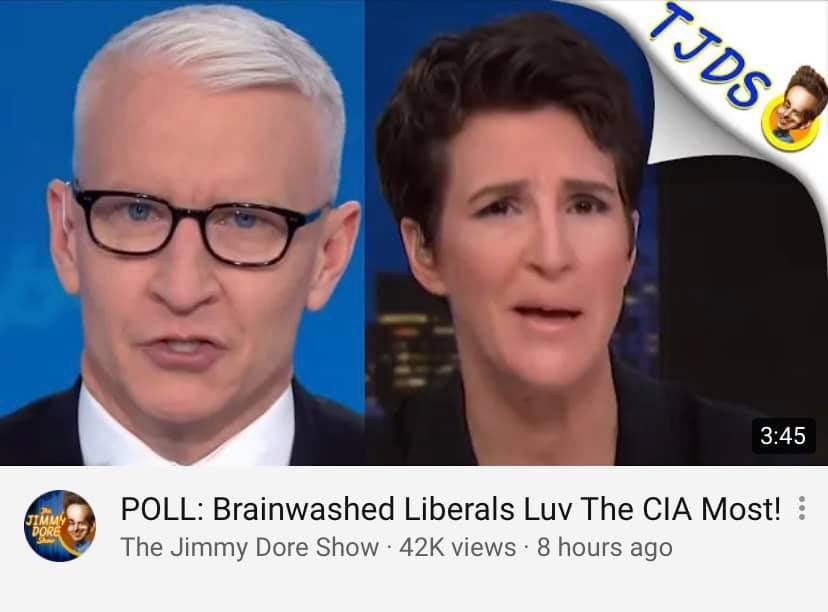 There is an excellent segment by Jimmy Dore on how #liberals trust the #CIA and regurgitate CIA talking points. This is not surprising since for 2 consecutive years, the Oscars nominated and awarded CIA-backed and #AlQaeda affiliated “civil workers” aka #WhiteHelmets.

The White Helmets openly collaborated and shared spaces with various Al Qaeda and ISIS affiliates backed by the West and their theocratic, dictatorial allies in the Middle East and West Asia. Notice how the White Helmets were curiously absent when the Syrian Kurds were recently attacked by NATO Turkey using Al Qaeda aka “FSA” militants.

This is just like Pakistani liberals supporting Musharraf, Imran Khan and Nawaz Sharif and spouting the talking points of our intelligence agencies. We know that happened as well when “activists” like #JibranNasir deflect and misdirect the “work” of our agencies onto easy targets like the PPP which is itself under attack. just recently, Jibran himself was given a shut up call by his handlers when his mike was interrupted. Of course, we have seen that Jibran is an opportunist who will revert back to his dis-ingenuousness.

The biggest tell of the dishonesty of this liberal class is their propensity for easy targets, low hanging fruit. This is because these liberals are ultimately spineless hypocrites who cannot take a stand. But love to lecture others.

This segment (shared in the comments section due to algorithmic censorship) is typical Jimmy Dore. A lot of hard hitting truths declared in his typically entertaining and profane style.