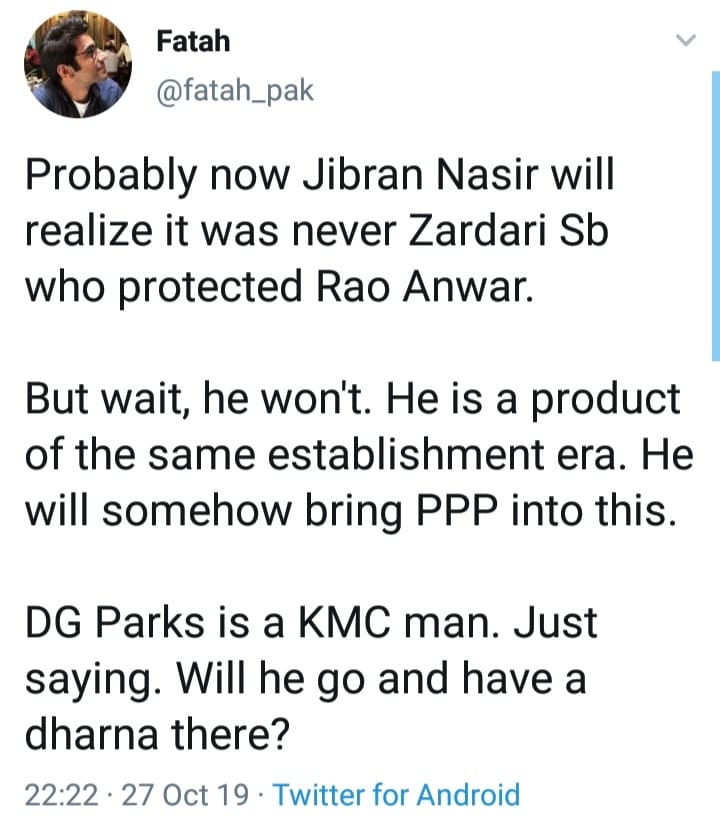 In an article published last year (?) by the Pro-PML N corporate media DAWN, Farrukh Zaman and Naziha Syedali selectively blamed Asif Ali Zardari for Rao Anwar. This was based on Asif Zardari’s commendation of Rao for launching an operation against the Taliban in the Mangopir area of Sindh. This was during the time (2007-15) when many areas of urban Sindh were deemed “No Go areas”

The DAWN article either failed to mention the “agencies” or severely diluted their role. It was common knowledge that the Rangers were running operations in Sindh against the Taliban/Sipah e Sahaba and MQM. Furthermore, Malik Riaz was originally an establishment man who has also done projects in PML N’s Punjab and PPP’s Sindh.

Now that Asif Ali Zardari and significant parts of the PPP government are in jail and/or under pressure from politically motivated charges, who is covering up this art exhibit “Killing Fields of Karachi”?

Are the “agencies” under control of Zardari. If so, how come he himself is in jail??

The only logical conclusion then is that DAWN’s reporting and Jibran Nasir’s “activism” has a political bias and anti-PPP prejudice.

That there are multiple power centres in Sindh and that PPP is amongst the least powerful – it is not even allowed to hold trials for the former President of Pakistan under its jurisdiction!

Rather than report against the “Deep State”, dishonest and biased folks like DAWN and Jibran Nasir are falsely attributing the deeds of the establishment and dumping them on easy targets like the PPP.

And for those who think President Zardari is in Jail, they should correct themselves. He is NOT in Jail, He is kept hostage by the state!

Where are the Proofs, Where is the Conviction, Just Propaganda. They could not prove their propaganda and thus want to kill him medically.

“They” have tried to hanging PPP, Shooting PPP, Cutting tongue and throat of PPP which didn’t work. Now this is the new tactic to kill PPP and claim it a natural death, they live in a fools paradise, Bhutto is not a person it is an ideology and ideologies can’t be hanged or shot!

Where are those liberals who are protesting about Nawaz Sharif and an elitist Biennale festival? About his main exhibit they had previously lied about themselves.

Unlike Nawaz, Zardari has not even been convicted. The case, as it stands in the Islamabad High Court, has whittled down from “billions of dollars of corruption and money laundering” to a bank transfer of $90,000 between sugar mills and vendors. The illegality of this transfer has not been determined after 3 years of a witch hunt. The transaction itself is related to a company from which Zardari resigned in 2008.

Will Jibran protest against this detention of Zardari? Of course not, we know Jibran is a hypocrite and those (declining) PPP supporters who share his selective activism are useful idiots.