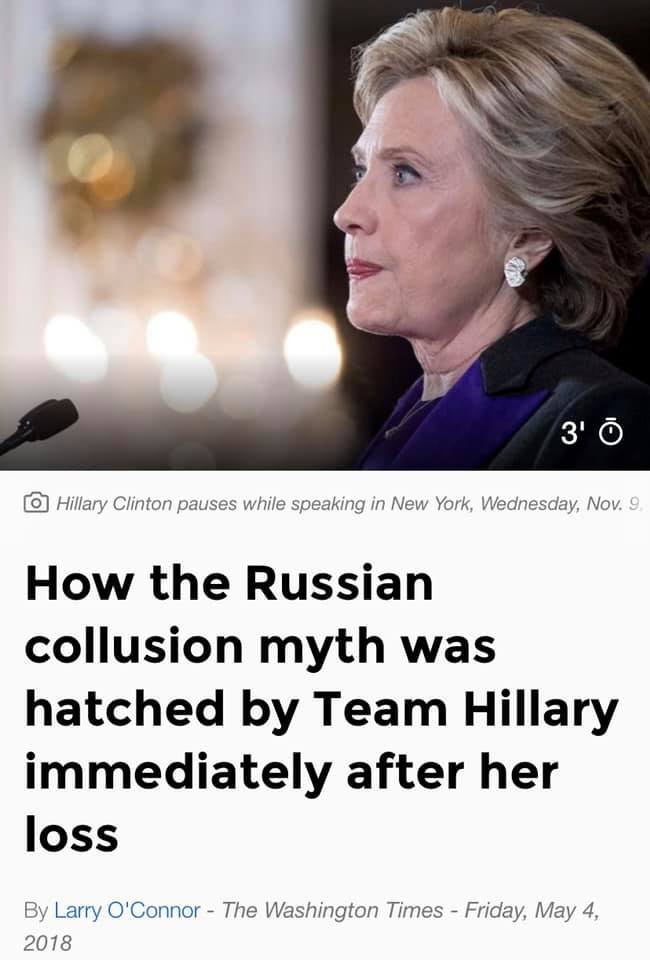 They settled on Russia. This is the same Russia which was given 20% of America’s Uranium recycling by Hillary Clinton while her Clinton foundation was rewarded generously. And it was the same Clinton campaign that paid Kremlin spooks to dig up dirt on their political rivals. Ever heard of the Steele Dossier.

I have added quotes from Left, Centrist and Right sources. All of them highlight the crucial moment when the Russia Gate conspiracy theory was hatched by the defeated Clintonites.

Calling out the Clinton results in all kinds of smears as we are seeing these days.

“She’s not being particularly self -reflective,” said one longtime ally who was on calls with her shortly after the election. Instead, Hillary kept pointing her finger at Comey and Russia. “She wants to make sure all these narratives get spun the right way,” this person said.

And if the Clinton campaign was good at anything, it was making sure narratives were “spun the right way.” So, the entire team, within 24 hours of the devastating loss, assembled to hatch the story. The scene, as painted with amazing detail by Allen and Parnes, sounds like a writers’ room for a television drama. The creative writing team throwing lots of story ideas around to see which one the consensus likes the most”

“A new book about Hillary Clinton’s last campaign for president ― “Shattered,” by journalists Jonathan Allen and Amie Parnes ― has gotten a lot of publicity since it appeared two weeks ago. But major media have ignored a revealing passage near the end of the book.

Soon after Clinton’s defeat, top strategists decided where to place the blame.

“Exhibit A is the book “Shattered: Inside Hillary Clinton’s Doomed Campaign,” by Jonathan Allen and Amie Parnes. In light of this week’s revelation that Hillary’s campaign funded the dirty anti-Trump “Steele” dossier, the book takes on a new significance. It reveals: “Within 24 hours of her concession speech,” the authors report, campaign manager Robby Mook and campaign chair John Podesta “assembled her communications team at the Brooklyn headquarters to engineer the case that the election wasn’t entirely on the up-and-up. For a couple of hours, with Shake Shack containers littering the room, they went over the script they would pitch to the press and the public. Already, Russian hacking was the centerpiece of the argument.”

Six months later, that centerpiece of the argument is rampant ― with claims often lurching from unsubstantiated overreach to outright demagoguery.

A lavishly-funded example is the “Moscow Project,” a mega-spin effort that surfaced in midwinter as a project of the Center for American Progress Action Fund. It’s led by Neera Tanden, a self-described “loyal solider” for Clinton who also runs the Center for American Progress (where she succeeded Podesta as president). The Center’s board includes several billionaires.”

The plan, according to the book, was to push journalists to cover how “Russian hacking was the major unreported story of the campaign,” and it succeeded to a fare-thee-well. After the election, coverage of the Russian “collusion” story was relentless, and it helped pressure investigations and hearings on Capitol Hill and even the naming of a special counsel, which in turn has triggered virtually nonstop coverage.”