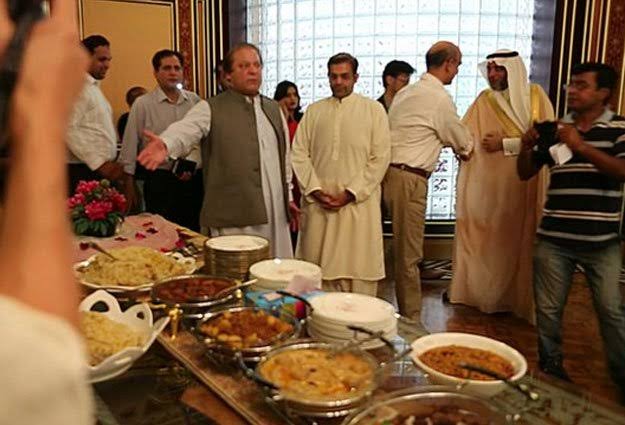 Recently, reports have emerged that Nawaz Sharif is being poisoned , by food supplied from his own house. Pakistan’s commercial liberals have issued the rallying call for “Punjabis to rise up and support their leader”.

Given my deep reverence for Pakistani liberals and my blind faith in anything uttered by this class, I want to share their concerns.

Given all the problems with Nawaz Sharif’s platelet count, I would recommend his chef team to cut back on the Meat curries with roasted Bitter Gourd. I would also request Che Nawaz to go easy on the McDonalds. While these may be Punjabi delicacies, they are not exactly, how do it put this delicately, known for their health benefits.

I know it is hypocritical of Uncle Hajjaji to dispense dietary advice to Nawaz Sharif given his own, ahem, habits. But we are all concerned that without Nawaz Sharif, we will all be deprived of valuable Lifafas. The gravy train, pun not intended, will come to a halt if Che Nawaz Zapata Trotsky falls ill.

I must commend our commercial liberals to focus on Nawaz Sharif and not show any concern for Zardari. We all know that Real Naya Pakistan really starts from Faisalabad and ends at Islamabad. The rest are just riff raft and a veggie eating, Sindhi-Baloch politician like Zardari does not count. No one can accuse our beloved liberals of having double standards.

Che Nawaz Sharif always wanted to go out in a blaze of glory; i.e., a private Saudi Jet with unlimited baggage and 10 kg helpings of Nihari and Sri Paye. And the McDonalds Family meal.

I urge Maulana Fazlu, that most lissome of Pakistani politicians to start his march. Comrade Shahbaz has stitched up the deal and a few more weeks down the road, after a hefty dose of JUI F’s sectarian “liberal” protest march, changes will be afoot.

Che Nawaz could well be on his way to a 4th stint.

Or he could play the Paindu Godfather. With Najam Sethi back as his Consiglieri, Maryam as Michael, Hamza as Sonny, Shahbaz as Fredo and Rana Sanaullah as his capo.

The gravy train, or sauce if we want to keep going with the Sicilian motif, will be restarted. Talat Hussain and Rauf Klasra will have their pensions restored. Imtiaz Alam Gillani will get a big payday to resume some wishy washy peace project that only be and 10 others will ever know of. Zardari will remain in jail. Fazlu will resume his “anti establishment” Rojava in KPK.

Just go light on those fry mutton chops comrade Nawaz. Don’t die on me now Che Nawaz. You will not just ruin the potential pay days of many liberals. Such an event might create a sympathy buzz for your party.