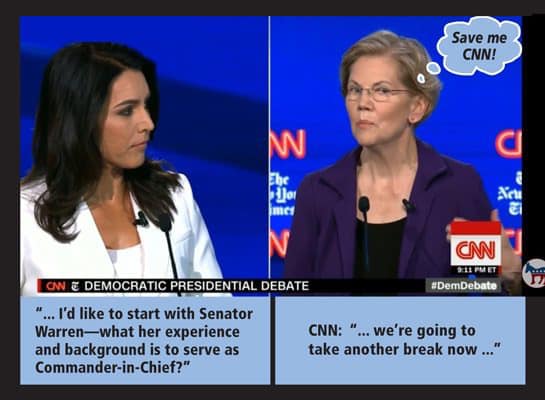 “She is close to Modi” they say while ignoring the cosiness between Modi and every other politician and Congressperson in the United States – including Congressman Ro Khanna – a senior member of Senator Bernie Sander’s team. Ro was feting Modi till at least 2012 after he jumped on the slandering Tulsi bandwagon.

Tulsi’s stand is far from perfect or clear on both Syria and Iraq.

But is eons better than anyone else at this level in the United States.

That is why CNN literally ran to a commercial break the minute Tulsi posed a tough question to Warren.

Warren is leading and is being promoted heavily (along with Biden and Mayor Pete) by all the usual neoliberal, identity politics platforms. She is likely to be “selected” if she does not outright “win” the Democratic nomination.

Imagine her debating Trump and being called out on her various liberties with the truth (Native American DNA, being fired from teaching for being pregnant)

Warren is part of the same Establishment Democrat power Center that approved for Trump, an alleged “Russian Asset”, double the increase in Defense spending than even what he asked for!!

This is like our compromised and corrupt Iftikhar Chaudhry giving a military dictator like General Musharaf the power to amend our Constitution – something even he did not demand for openly.

The class and mentality of those elevating Warren inspite of her track record of problematic compromises is the same as those who elevated Iftikhar Chaudhry.

And such uncritical elevations always have a tendency to rebound badly.