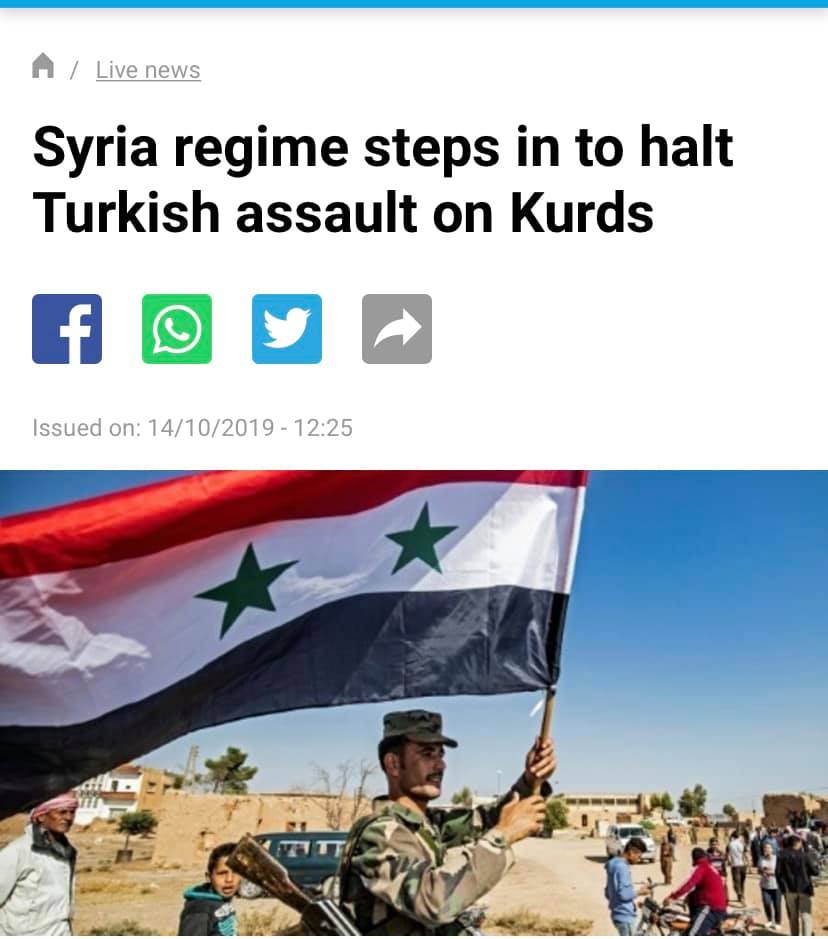 So the Syrians, as always, protect their own.

This should serve as an eye opener to those Kurds who not only ethnically cleansed this area of its Assyrian and Arab populations. They betrayed Syria, the country that provided them refugee status. It was this betrayed that weakened the Syrian government’s ability to protect Syrian Kurds.

For nearly a century, different Kurdish factions have chosen the wrong sides and have continually been betrayed by the West and Israel; whose proxies they pine to be.

The Kurds supported the Turks during the Armenian genocide. They used the Iraq-Iran war to carve out their own territory out of Northern Iraq – only to be betrayed by the West when Saddam massacred them.

They used similar tactics of ethnic cleansing in Northern Iraq and then finally failed again in 2017 when the West betrayed the Talebani Kurdish nationalists in Iraq.

In 2014, the Syrian Kurds betrayed the Syrian government of President Bashar Al Assad and sided with the same West; who along with Turkey, Israel and Qatar, were openly backing Al Qaeda affiliates against Syria.

As the Syrians and Russians continued to liberate Syria from Western-backed Al Qaeda, some Syrian Kurds used this opportunity to ethnically cleanse areas in Northern Syria of its indigenous Arab and Assyrian population.

For nearly a century, Kurdish nationalist folklore dictates the establishment of a hyper nationalist and ultra leftist ethnic State carved out of areas where other Syrian, Iraqis and Iraqis live.

The majority of those who identify as Kurds reside in Turkey where they suffer from routine persecution, oppression and a denial of their cultural and linguistic rights. Yet Kurdish Nationalist factions want the destruction of Syria, Iraq and Iran in order to fulfill their territorial goals.

For nearly a decade, the West has demonized Syria whereas it was really their own NATO allies like Turkey who were supporting Al Qaeda and now attacking the Kurds. For nearly a decade, we have been subjected to the most absurd propaganda against Syria by #CNN, #BBC #WaPo #NYT #TheGuardian. The chemical attacks have proven to be False Flags that were likely perpetrated by the West-backed Al Qaeda affiliates and then pinned on Turkey.

Obama, Biden, Mattis, Clapper, the UN have all expressed doubts (at various times) at the ludicrous allegations that these chemical attacks were being perpetrated by the Syrian government.

Seymour Hersch and Theodore Postol (MIT rocket scientist) have debunked these False Flags whose primary sources include suspended NHS Al Qaeda supporters and #ElliotHiggins; literally another one-man show operating out of his couch in England.

The West relied on Turkey and Qatar to manufacture evidence against Syria. Who can forget the 7-year old “journalist” BanaAlAbid. This poor child was used by Erdogan and her Ikhawni parents to demonise Syria. Bana’s Twitter account (operated by her Al Qaeda sympathising mother) was retweeted by JK Rowling and advocated for World War 3 to destroy Syria and Russia.

So we have now (hopefully) come full circle from this madness. Where the same Erdogan who was the darling of the West and its commercial liberal proxies in Pakistan, has been exposed. Sadly, so have the Kurds whose only salvation now lies in not backstabbing the same countries that saved them from a genocide by NATO Turkey.