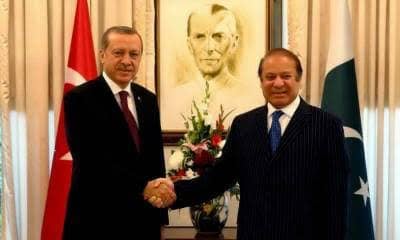 Pakistan’s Boutique left and commercial liberals need to confront their darling Nawaz Sharif; as to why he was so friendly with the same Erdogan who is bombing the secular-left Kurds in Syria today.

Erdogan-lead Turkey has played a disastrous role in the West Asia region. Erdogan’s latest accomplishment has been to butcher Kurds in Syria – who should have known better than to allow the United States, Israel and Saudi Arabia to use them against Syria.

Right wing straw men and paper tigers in Pakistan have a fetish for Neo-Ottomans like Erdogan. This fetish is not just limited to Imran Khan but was more deeper for the Nawaz Sharif dynasty.

Both Nawaz and Shahbaz Sharif copied the Turkish Model of corruption. This involves spending hard earned foreign exchange on vanity projects that are full of corruption and kickbacks.

The Sharifs perfected the system of kickbacks and corruption and Pork Barrel projects. Using this corruption, they misused government funds to “invest” in their media projection and the defamation of their political rivals like PPP.

It is these values of cronyism, nepotism and corruption that are shared between the Sharifs, Niazis and Erdogans.

Pakistan’s Boutique left and commercial liberals need to ask why their darling, Nawaz Sharif, was so friendly with the same Erdogan who is bombing the secular-left Kurds.