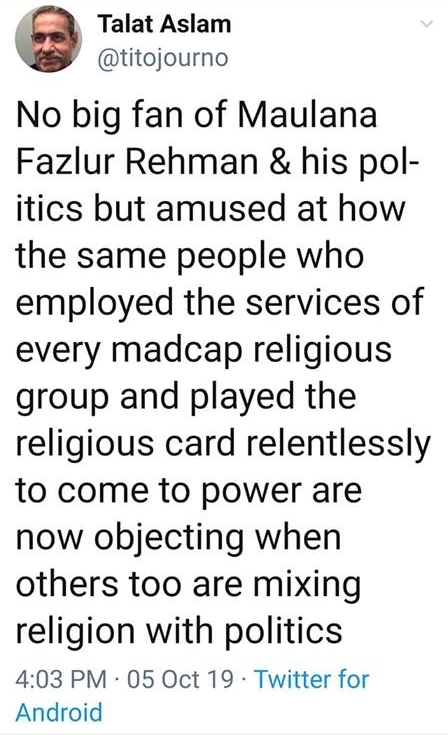 Background: In June 2014, members of Pakistan Awami Tehrik (PAT) were attacked on the orders of Punjab CM Shahbaz Sharif. This was days after PAT’s President, Tahir ul Qadri has backed a military operation against the Taliban. PAT is a leading Sunni Barelvi organization in Pakistan whose head had condemned the murder of Taseer. Then PM Nawaz Sharif supported both the Taliban and hateful clerics like Khadim Rizvi. The latter had helped eliminate PPP’s Punjab Governor Salman Taseer who was a political rival of Nawaz Sharif.

The PML N party leadership had lead the hate campaign against Taseer with Rana Sanaullah publicly leading the campaign.

The same Rana Sanaullah and Shahbaz Sharif were behind the Model Town massacre which lead to the murder and maiming of 100+ members of PAT at the hands of police under the PML N Punjab Government.

Pakistan’s (commercial) liberals abused, mocked and jeered the PAT protestors who are still being denied justice 5 years later. One leading liberal human rights champion went so far as to label Tahir ul Qadri as a “traitor”. This champion of rights damaged her own legacy by aligning herself with the ruling PML N and the Sipah Sahaba hate groups that were backing the Sharif political dynasty.

Mahmood Khan Achakzai of PKMAP used hateful slurs against the protestors that are couched in Deobandi sectarianism against more traditional Sunni and Shia Muslims.

Pakistani liberals stood with the government and are in favor of denying police brutality committed under the chief minister ship of Shahbaz Sharif.

This corrupt Right-Left nexus has manifested itself in establishment-backed PNA and lawyer’s “movements”. This dirty alliance supports Al Qaeda in Syria and Sipah Sahaba in Pakistan.

In 2013, the same Fazlur Rahman of JUI F and (then) PM Nawaz Sharif backed and supported Sipah Sahaba during the latter’s attempts to ignite sectarian riots in Rawalpindi. In 2017, this attempt was proven to be another Takfiri False flag. But in 2013, the same commercial liberal mafia was repeating the talking points of JUI F and Sipah e Sahaba.

Today, these Patwari liberal sellouts are abusing the PPP because Bilawal Bhutto Zardari warned JUI F not to conduct its protests using sectarian slogans. Liberals in bed with the Sipah Sahaba (an urban #ISIS affiliate) are accusing PPP of being “sellouts” simply because the PPP does not want these protests to strengthen hard right sectarian forces.

In 2014 as well, the PPP sympathized with PAT but did not support the PTI’s aims to overthrow the PML N government using extra constitutional tactics. PPP’s “reward” for this principled stance was being hit with more politically motivated charges by the Sharifs.

In 2019, the PPP once again does not want the protests to be hijacked. Which is why they are being abused by liberals whose commercial interests are tied with the purse strings of Nawaz Sharif.