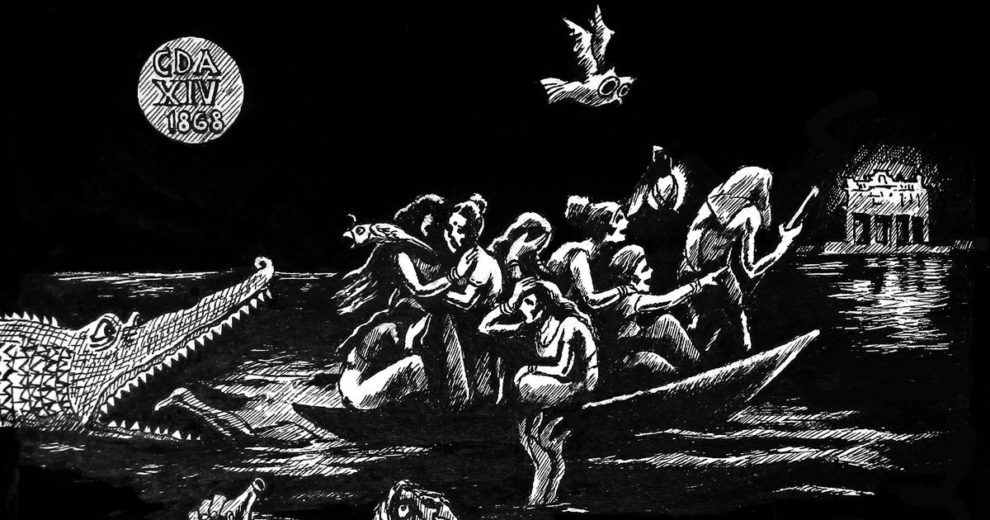 In the town of Chandannagar, famed for its colonial French architecture and inventive LED arrangements, lies Laxmiganj Bazar, a 500-metre stretch on the Grand Trunk Road with nothing to set it apart. The bazar has some small or mid-sized stores, a few residential buildings and a shopping complex, but nothing that bears a sign of its vivid past, when it sheltered sex workers being persecuted by a cruel British law in Bengal.

Time has not been kind to Chandannagar’s heritage. Most of its French architecture has been razed for real estate, save for the road across the famed Chandannagar Strand, the promenade built along the Ganga in 1921. “The Chandannagar administration, since the time of the Communists, has suffered from a lack of understanding of both history and the need to preserve heritage,” said Bhabani Chandra Das, 85, a statistician and long-time resident. “Today, nobody under 35 probably knows what Laxmiganj Bazar was. The story of this town starts and stops at Strand, unfortunately.”

Chandannagar was established as a French settlement in the late 17th century. For the next hundred years or so, the French and the British kept fighting over it, alternately winning control. But through it all, sex trade in Chandannagar survived and the town gained a sizable population of sex workers.

A great influx to Laxmiganj Bazar came later. In 1868, the British enacted the Indian Contagious Diseases Act, or Act 14, which required all sex workers to register with the government and undergo tests for venereal diseases. The law had hoped to keep British soldiers from sex workers. But it did so by unleashing a wave of oppression on the sex workers, causing their exodus to Chandannagar.

“Act 14 was a case of bad implementation of a thoughtless law, causing torture, end of livelihoods, and eventual displacement of the weakest sections of the society at the time, something that keeps happening to this day,” said researcher Surojit Sen. A longtime Chandannagar resident, Sen and illustrator Sambaran Das published a commentary on Bodmaish Jabdo in 2017.

According to historian Sumanta Banerjee’s Dangerous Outcast: The Prostitute in Nineteenth-Century Bengal, commercial sex work flourished in Calcutta and its outskirts in the 1800s. This was markedly different from the work of tawaifs in pre-colonial India, who would receive royal patronage, be engaged in the arts, and take part in social and cultural festivities.

Under the British rule, courtesans and concubines began to fade out, making way for the commercial sex worker, whose occupation was solely to provide pleasures of the flesh, Banerjee wrote. As he pointed out, only the most “rootless and displaced women” across the state would travel to Calcutta and its nearby urban pockets to join the profession.

British attitudes towards sex workers stood in sharp contrast to the inclusive manner in they which were acknowledged earlier in society. On the one hand, pricked by “Victorian morality”, the government attached a stigma to the profession and codified it as crime. But on the other, it turned sex work into an organised business for the sake of its soldiers – which is where the Contagious Diseases Act comes in.

Under the East India Company, British soldiers could not be stopped from visiting public brothels, many of whom got infected with venereal diseases. This caused loss of man hours and added to the healthcare burden of the administration. The British state tried to put a stop to to this after taking over the Indian administration from the Company. In 1864, it introduced the Cantonment Act, ordering the creation of official brothels within “regimental bazars” in a bid to control the spread of venereal diseases.

The policy failed spectacularly. The troops frequently travelled out of cantonments or escaped their barracks to have sex elsewhere, continuing the spread of sexually-transmitted diseases, Banerjee wrote. So, on April 1, 1869, the British introduced the Contagious Diseases Act in India, near-replicating a law passed in the United Kingdom in 1864.

The Contagious Diseases Act made it compulsory for sex workers in India to get registered with the government and undergo a checkup for venereal diseases. If found infected, the sex workers had to be quarantined and treated until they were fit to return to work.

Calcutta’s sex workers were stridently critical of the law for the humiliating manner in which they – and sometimes even other women – would be rounded up and registered, Banerjee wrote. If they refused to register – or were deemed unregistered prostitutes under the law – they were thrown into prisons. The sex workers also reasoned that the law was bad for business since it kept them in hospitals for long periods.

The sex workers with financial means bribed their way out, but the policeman on the street, under pressure to show results, ended up oppressing poor women. This led to an exodus of Calcutta’s sex workers. According to a government memo of 1887, quoted by Banerjee in his book, “more than half the native public women had left the city and sojourned in the suburbs and further away”.

The Laxmiganj Bazar red-light district was older than the brothels of Calcutta. According to Chandannagar historian Biswanath Bandyopadhyay, it came into being “because…of travelling businessmen who would come here in the late 1700s”, but it “flourished because of the” Contagious Diseases Act.

Scores of sex workers escaping Calcutta took refuge in Laxmiganj Bazar. “With the huge influx of prostitutes, the French government began taxing them, and the market became their official working space,” Bandyopadhyay continued. Some centuries later, “the Left Front government drove them out in the 1980s to help promoters create real estate. The prostitutes escaped to nearby towns of Chinsura and Kalna.”

Growing numbers drove down the prices of the sex workers in the 19th century. As Prankrishna Dutta’s contemporary Aghor Chandra Ghosh wrote in the farce Panchali Kamalkali (The Poem of the Lotus Bud), “Aat poisar mojur jara khejur chatay thakey/khatpolonkey khasha bichanaye succhey lakhey lakhey” (Labourers worth eight paisa who would earlier sleep on coarse mats made of palm leaves now got a chance to be comfortable on lavish beds of the best prostitutes).

Meanwhile, in Calcutta and the rest of British Bengal, the tyranny of the Contagious Diseases Act continued. “At least 12 women” were jailed every day for failing to comply with the rules, Banerjee wrote, while in prisons and hospitals, police discriminated between Indian prostitutes and those of European and Eurasian descent.

This turned bhadralok sentiment in favour of the sex workers. Where earlier, Calcutta’s middle class supported the law – they thought it would “vanquish” the “evil” of prostitution (hence the title of Dutta’s farce) – they now realised that it had become a tool to oppress the disenfranchised. They wanted it repealed.

There was a similar movement afoot in the United Kingdom. Women’s groups – including Josephine Butler-led Ladies’ National Association – found the regular examinations of women under the British law degrading. They demanded that it be repealed and got their victory in April 1886.

Ladies’ National Association next turned its attention to the Indian Contagious Diseases Act. The bhadralok politicians lent unflinching support, and the British army in India noticed that the tides were changing. Besides, only a few arrests had ever turned into convictions, and few sex workers actually got treated at hospitals. With a large part of the workforce somehow escaping the law, the government realised that the presence of venereal diseases had increased among the British troops.

The British army finally caved in. In September 1888, after more than 20 years, the Contagious Diseases Act was revoked in India.

Over the next century, prostitution dwindled in Chandannagar, owing to the rise of “educated middle class with moral values instilled by the Communists,” said Bandyopadhyay. Meanwhile, with the British gone, Calcutta regained its sex trade industry in the form of Sonagachi, said to be Asia’s largest red-light district.

“The business that all of Sonagachi brings, because of not just the sex trade, but the adjoining restaurants, bars and shops is unimaginable,” Sen said. “Of course, it is allowed to exist.”

Do the problems that came to light because of the 1868 law – be it sexually-transmitted diseases among sex workers or government oppression – still exist in 2019? Yes and no, said Bharati Dey, mentor at the Durbar Mahila Samanwaya Committee, a collective of over 65,000 sex workers in West Bengal.

Formed in 1995, the organisation works as an advocacy group for sex workers, making their working conditions safe. In association with the National AIDS Control Organisation, the committee runs 49 clinics for routine health checkups of sex workers. “The organisation has empowered sex workers and given them the power to say no to a customer who does not want to wear a condom,” Dey said. According to a 2018 study by the Joint United Nations Programme on HIV/AIDS, 1.6% of female Indian sex workers were HIV-positive or had AIDS in 2017, and 91% of sex workers used condoms in 2018.

Operating from North Kolkata’s Sonagachi, the organisation protects and stands up for sex workers against legal and extra-legal oppression, as documented in Shohini Ghosh’s 2008 documentary Tales of the Night Fairies. Not everything is rosy, of course.

“Why should sex workers register themselves in any government list?” Dey said. “Even today, often the police or the government approaches us with such requests. All sex workers have their identity proofs required to live as Indian citizens, so why can’t they go by their business independently?”

While Kolkata’s sex workers have organised themselves as a force, they have often faced societal prejudice and harassment. Locals protested against their requests to celebrate Durga Puja in Sonagachi in the early 2010s. The matter went to the Calcutta High Court. The sex workers won the case and have been celebrating Durga Puja since 2013, Dey said.

“There are so many issues that we are still fighting for,” Dey continued. “We want the removal of the Immoral Traffic Prevention Act and the even more dangerous anti-trafficking bill. Our rights are not recognised as we are still not covered under labour laws. The profession is yet to be made legal. There’s a lot of work that still needs to be done.”