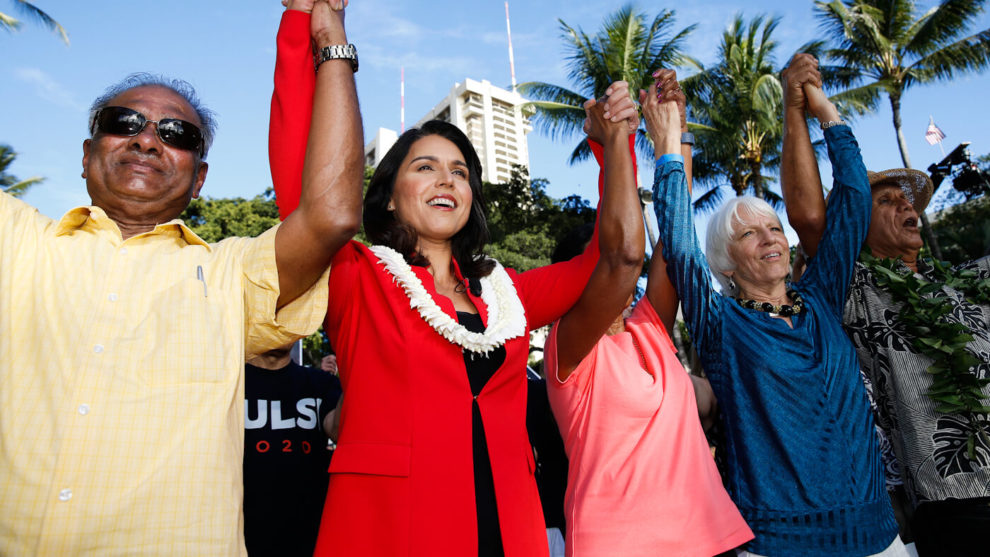 Hawaiian Congresswoman Tulsi Gabbard, the peace messenger in the Democratic primary, was not even born when Dr. Martin Luther King, Jr. delivered his prophetic anti-war address at Riverside Church in New York, April 4, 1967. I remember sitting in one of the pews as King dramatized the domestic and human costs of war. That speech alone transformed my own view of the U.S. role in the world.

Gabbard, an opponent of regime-change wars today, is only 38 years old, but every time she speaks with aloha—and the wisdom of a soldier who has seen the ravages and scars of war—I still recall Dr. King’s masterpiece, “Time to Break Silence.”

What makes King’s address so relevant to the coming election, especially to Gabbard’s campaign for peace, is not King’s denunciation of aggression, important as that is. It’s how King demonstrates the role of militarism in causing economic inequality, unrelieved destitution and a loss of idealism and hope among American youth.

Dr. King saw our domestic crisis coming when social reforms of the “great society” were being put on hold. “A few years ago,” he began from his well-lit pulpit, “there was a shining moment in our struggle…There were experiments, hopes, new beginnings. Then came the buildup in Vietnam, and I watched the programs broken.”

Of course I don’t intend to compare the range, the breadth, the passion and profundity of King’s life work with the campaign of a single candidate. Nor am I concerned about the controversies about Gabbard’s early career. What concerns me is the indifference of many Democrats—like Kamala Harris and Tim Ryan—to the relevant teachings of Dr. King regarding the domestic costs of war. Is the Democratic Party a party of war or a party of peace?

Pundits say Gabbard is not likely to become the nominee. Even if they are right, Gabbard may well shift the focus of the debates. As the gadfly for peace, her message may provoke candidates—like Warren and Sanders—to raise moral, legal, and economic issues the media always evade.

In recent years, the U.S. has conducted serious bombing campaigns in Afghanistan, Iraq, Pakistan, Syria, Libya, Somalia, and Yemen—killing civilians, destroying infrastructure, and causing environmental ruin. At the Watson Institute, Gabbard gave an impassioned address, “Build, Don’t Bomb.” Gabbard called on us to use our “limited resources to meet the needs of our people and communities. Because the reality is, that as long as we are wasting trillions of dollars preparing for nuclear war, whether it be with a country like Russia or China, as long as we continue waging one regime-change war after another, we will not be able to provide healthcare for all. We will not have the resources we need to make sure our kids are getting a good education. We will not have the resources we need to make the kind of bold investments in green renewable energy. Do we want to continue… to be the world’s police, intervening in one foreign country after another, toppling one dictator after another, or focus on rebuilding our communities. We cannot afford both. We cannot afford to do both.”

Gabbard is incisive, practical, and convincing, where other candidates are silent.

Have you ever wondered how it’s possible that this country, the wealthiest country in the world, can’t afford to maintain our roads and bridges…Can’t afford to make sure that every American has clean water to drink? How is it possible that this country cannot provide healthcare for its people? We look to the cost of war, and how, since 9/11 alone, we spent anywhere from 6 to 8 trillion dollars on regime change wars. The U.S. spent over a trillion dollars in Afghanistan alone. We continue to spend 4 billion dollars in Afghanistan, dollars that are coming out of our pockets every single month. Four billion dollars a month. We’ve seen countless lives lost, both American and Afghan lives… For what. For what?!”

As Dr. King put it: “A nation that continues year after year to spend more money on military defense than on programs of social uplift is approaching spiritual death.”

Sovereignty and self determination

Unlike the interventionist Democrats—who are willing to interfere in the internal affairs of Venezuela, Iran, Afghanistan, Syria, Korea—Gabbard affirms the right of all peoples to self-determination and the sovereignty of states.

“Only the Afghan people can determine their own future,” she says.

The New York Times summarized Gabbard’s stand: “Leave other countries alone.” “Bringing an understanding of what sovereignty means is my mission,” Gabbard says.

When Gabbard was asked, “Who do you think should run Venezuela?” she replied: “It’s not for me to decide. It’s not what I think or believe, this is a decision and a choice, a process that people in other countries should make for themselves.”

We can almost hear the echo of John Quincy Adams, America’s sixth president: “America…goes not abroad, in search of monsters to destroy.

Congresswoman Gabbard often tells a story about Dr. King in Hawaii. “Dr. King saw the power of aloha when he visited our islands.”  In his address to the Hawaii House of Representatives in 1959, King said:

We look to you for inspiration as a noble example, where you have already accomplished in the area of racial harmony and racial justice, what we are struggling to accomplish in other sections of the country, and you can never know what it means to those caught for the moment in the tragic and often dark midnight of man’s inhumanity to man, to come to a place where we see the glowing daybreak of freedom and dignity and racial justice.” King marches alongside a contingent from Hawaii during the historic Selma marches in 1965.

When King returned to his congregation on the mainland, he said: “As I looked at all of these various faces and various colors mingled together like the waters of the sea, I could see only one face—the face of the future.”

Hawaii never forgot King’s vision.  And a five-person contingent from Hawaii joined the historic Selma marches in 1965. They carried a huge banner that read: “Hawaii knows integration works.” Reverends King, Shuttlesworth, Rabbi Heschel, among others at the head of the march, all wore leis flown in from Hawaii.

“Aloha,” says Gabbard, “is a powerful force that motivates us to take action for the well-being of others and our country.”  In King’s famous words, “The arc of the moral universe is long, but bends toward justice.” Gabbard seeks to bend the arc of history away from war toward peace.

Paul Rockwell is a former assistant professor of philosophy at Midwestern University and a national columnist for In Motion Magazine. He writes a column, “Gone Tubin” for the East Bay Times. His commentaries have appeared in the Nation, Common Dreams, Truthout, Los Angeles Times,  Counterpunch, Sacramento Bee, San Jose Mercury News, Post Newspapers, and many more periodicals.