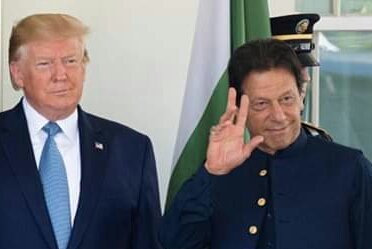 In his 14th August statement, Imran Khan repeated cliches and obvious realities with his typical insincerity and complete obliviousness to Irony. IK made his political career as a Taliban apologist who justified and denied their worst atrocities.

No doubt, religious fascism, bigotry and intolerance are on the rise in India. But Imran Khan is the worst person to point it out.

More than a year after being selected as Pakistan’s prime minister, Imran Khan remains hopelessly inept. His party is filled fanatics and those who fraternize with bigots. His followers take their civility lessons from Sheikh Rashid.

After nearly 400 days in power, PTI and their Fascist allies refuse to take any responsibility and are still stuck in blaming the opposition. Inflation has skyrocketed and PTI’s absurd promises have been wrong.

“This is my message to you: you take action and every brick will be countered with a stone” — meaning, any action will meet with a stronger response. He described Prime Minister Narendra Modi’s unilateral decision as a “strategic blunder” that had ended up internationalizing the Kashmir issue. And in remarks that echoed those he had made a day before, he compared the situation in IHK with the rise of Nazi Germany whose extremist ideology was the inspiration behind the Hindutva creed. The world, he said, must be made aware of the dangers inherent in Hindu extremism.”

The Karma of “Kashmir will become Pakistan” – by Abbas Zaidi
Under both domestic and international establishment constraints, Bhutto still managed to outwit Indira Gandhi