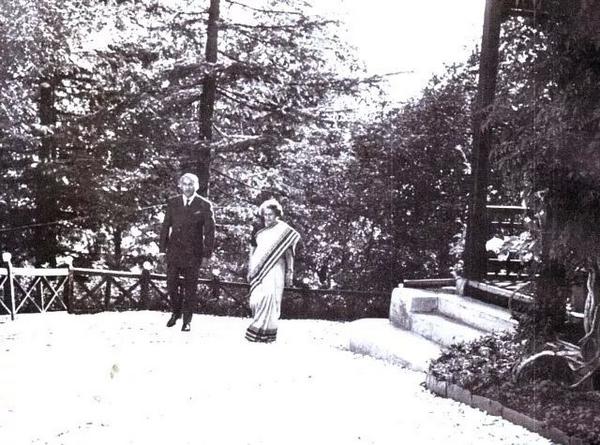 From 1972-77, under both domestic and international establishment constraints, Bhutto still managed to outwit Indira Gandhi, release 90,000 prisoners of war and get back large swathes of Pakistani territory lost to India in the disastrous 1971 war.

Jamaat e Islami and its followers blame and abuse Bhutto for “breaking up Pakistan”. Interestingly, so does Pakistan’s spineless left-liberal and False Neutral types. Often times, both even use the same talking points to dump the folly of Pakistan’s Junta onto Bhutto. The more-loyal-than-king Left liberals claim that Bhutto “betrayed” Mujeeb Ur Rahman. But Mujeeb does not blame Bhutto. He is very clear in the run up to the 1970 elections on who pushed him and his people to the wall. Mujeeb, the first Prime Minister of Bangladesh bounded up to warmly receive Bhutto on the latter’s state visit to Bangladesh and the unequivocal acceptance of Bangladesh by Pakistan, as an independent and sovereign country.

This one image made many of us realise that as far as (False) narratives are concerned, there is little to distinguish between the Jamaat and the left-liberal. Both share certain pathologies that incline them to blindly defend the indefensible. Both have many good, decent, educated and intelligent people within their ranks but somehow cannot go beyond their pathology.

In her first stint as Prime Minister, Benazir Bhutto made a historic visit for peace to India. This “transgression”, like Bhutto’s nationalization policy, was never forgiven. Benazir was relentlessly abused and slandered and the person leading these gutter attacks was none other than left-liberal’s current Che Guevara, Nawaz Sharif.

After Benazir’s visit to India, Nawaz Sharif continued to malign her as a “traitor”. This vicious abuse campaign against Benazir was a joint project of Nawaz Sharif, Sheikh Rashid, Najam Sethi and Hussain Haqqani and it has continued beyond her death. Today, PTI-MQM activists are recycling the same vicious attacks.

Nawaz Sharif himself invited Vajpayee for a peace visit to Pakistan in 1999. But he lacked both the courage and the intelligence to take a stand against General Musharaf. Benazir had rejected the Kargil plan. Nawaz Sharif could not even manage its diplomatic fall out. He was ultimately overthrown .

By 1998, Benazir Bhutto had rejected the policy of “strategic depth” and the ploy of using WSD sectarian militants as proxies. She continued with this defiance and was finally killed along with hundreds of PPP activists (in multiple attacks) for this stand.

In 2008-9, “anti establishment” Nawaz Sharif and Imran Khan tag teamed to thwart the PPP government’s initiative of the Kerry Lugar Bill that called for curtailing and restricting JeM and LeT. The media obviously supported these attacks on the PPP Government. The left-liberals once again showed their spinelessness. Like 1974, they were no where to be found in taking a stand.

This continued on for years as Pakistan continued to loose at the international level. Memogate cost PM Gillani his job but an over hyped, self-anointed “PPP voter” failed to take a meaningful stand against the same corrupt and compromised judges that she helped empower. The same judges derailed her own client, Nawaz Sharif, in less than 5 years.

Till 2014, both Nawaz Sharif and Imran Khan competed on who could be a bigger apologist for the murderous TTP. While Syria’s President Bashar Al Assad took on the transnational Al Qaeda sectarians unleashed on his country by US-Saudis-Israel-Turkey-EU-Qatar, Nawaz Sharif and Imran Khan took turns in being apologists for those slaughtering Pakistanis.

In 2019, Pakistan’s establishment and their selected stooge finally surrendered after 71 years of counter productive policies for Kashmir.

When PPP tried to take Pakistan on a different path on foreign and economic policy, they were derailed by not just the civil-military establishment but also by their civil society counterparts  in PML N, MQM and PTI. India and Bangladesh built their economies on similar nationalization policies enacted by Bhutto. But they never had to contend with a chauvinist and parochial bureaucracy that worked to undermine elected governments.

Does India and Bangladesh have backstabbing hypocrites like Mairaj Mohammad Khan and Dr Mubashir Hassan who cried about how “Bhutto betrayed the left”. But who partnered with Jamaat e Islami/Pasban, ISI/General Hamid Gul and a rightest media to constantly undermine PPP.

Today, we are all hoping that our establishment has truly learnt from the mistakes of the past – at least on Kashmir. On Karachi, we know that their tactics are as dirty as the gutter water overflowing on Pakistan’s streets. For which, once again PPP is being made a scapegoat while MQM (which controls KMC) and PTI are being conveniently absolved.

Imran Khan: Evoking Nazi Germany while paling with Trump
On Eid-e-Qurban many families will spend their Eid without missing family members