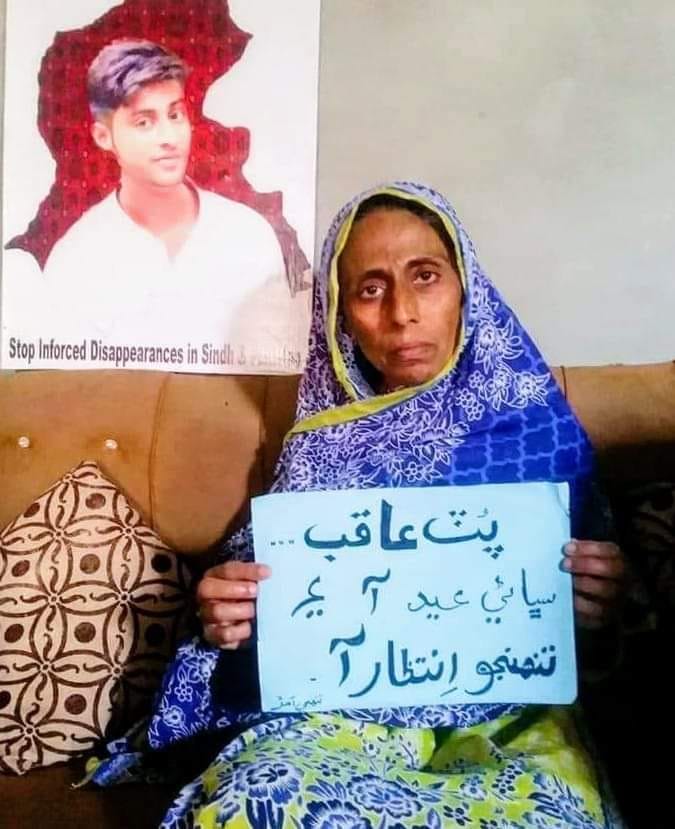 On Eid-e-Qurban day there. are many families, which will spent their Eid holidays without there family members, who are either missing by force or put behind bars due to their dissenting views.

I can’t mention here all names of those families who are directly victims of the practice of making the people missing by force in Pakistan or affectees of political victimization or of curbs on freedom of expression or due to raising their voice for human rights but can mention some examples here to understand seriousness of this issue.

Remember that there are dozens of such Kashmiri mothers, sisters, wives, daughters who are waiting for any news about their sons, brothers, husbands and fathers either made disappeared by force from #JammuAndKashmir or put behind the bars just due to their views rejecting the meta narrative of the Indian state and here hundreds of people not only feel their pain and sufferings but they raise their voices to show their solidarity with victims and their feeling is exactly right but their humanity based feeling doesn’t appeared on surface when question of either such enforced disappearances or putting them behind the bars in Baluchistan, Sindh, KPK Saraiki areas and from Gilgit-Baltistan is put in front of them. They have many lame excuses for their silence.

Still in Pakistan, unfortunately we didn’t see any mass based movement on national scale to stop the practice of making people missing by force or putting them behind the bars due to their political views or their struggle for their rights.

Victim families or some outspoken and fearless activists belong to their ethnic or religious community are themselves busy in resisting the fascist actions and in making effort for release of enforced missing persons and prisoners.

We are seeing all mainstream political parties either from right wing or from liberal or left wing organizing protest rallies and main leadership of them leading the protest to show solidarity with people of IHK.

Bilawal Bhutto Zardari, Chairman PPP will offer Eid prayer not only along with leaders of All Parties Hurriyat Conference but lead a rally in Muzaffarabad of #PHK to show his and his part’s full support and solidarity for people of Kashmir.

PM, President, Opposition leader in NA all are showing their support for people of #IHK and meeting with delegations from PHK.

But such passion is missing for oppressed and suppressed people of different areas of Pakistan, why?

From 31th May, 2018 we are making appeals to leadership of all mainstream political parties to take notice of enforced disappearance of Aaqib Chandio from #Larkana #Sindh, even we had requested #BBZ elected #MNA from the constituency, where from Aaqib Chandio went missing to take notice and to go there and meet ailed mother of the said person but still nobody is ready to pay the attention.

Why we don’t see powerful expression of solidarity from mainstream political arena or powerful Elites of the Civil society over those issues which have some resemblance with Question related to Kashmir?

Is it not hypocrisy? Is it not double standard about two same phenomenon?

Suppose that I accept that there is qualitative and quantitative difference between the case of victims of enforced missing persons, of political victimization in Pakistan and of same phenomenon occurs in Kashmir but is it just thing to keep silence on such issues in #Pakistan?

Can we remain indifferent over this issue in Pakistan?