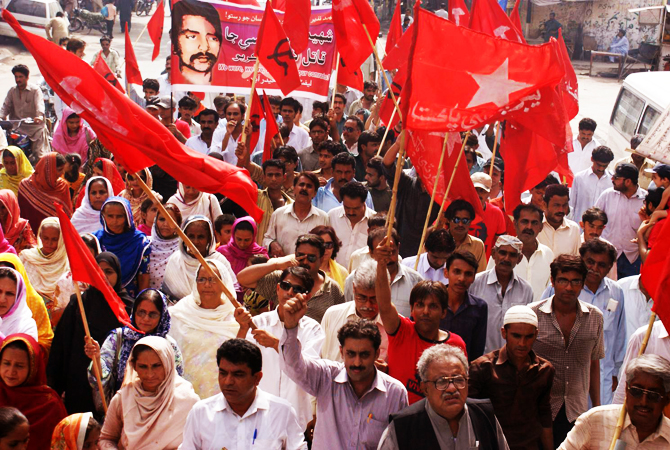 CCP in that era of chaos was making struggle for Proletarian rule in the country, while resisting against the the regime’s policy to ban all type of political, trade union and students union work in the country. CCP opposed severely regime’s pro-imperialist policies like its joining in the camp of those imperialist forces, who had started a war against socialist republic of Afghanistan in the name of Jihad and allowed CIA to set up training camp for gorillas recruited from all over the Muslim world in the name of Jihad along side Pak-Afghan border and paved the way for radicalization of young minds under influence of Islami Jamiat Talba or those who were sent in Deobandi or Salafi seminaries.

Nazeer Abbasi organized well students in educational institutes of Sindh against Zia regime and its policies.

He was working among laborers, Haris to organize them and his achievements were remarkable.

He wrote many pamphlets and managed their distribution.

He was elected in very young age as member for central committee of CCP.

He was included in most wanted political workers of Sindh.

Later former Army officer Imtiaz had admitted that FIU team led by him had arrested Nazeer Abbasi but he didn’t accept that death of him was due to torture made by him and his subordinates.

Pakistan has long history of illegal detention, making missing by force, extra judicial killings of political workers, writers, authors, poets, intellectuals and allegedly thugs in state institutions were involved in such practices either in periods of dictatorship or in tailor-made democracy Era like now-e-days we are witnessing.

In past democratic forces, whenever came in power, they avoided to set-up ‘Truth & Reconciliation Commission’ to dig out whole truth about missing persons by force, torture to death in safe houses.

From Musharraf Era to till today, making missing by force, torturing to death and throwing mutilated bodies of political workers, poets, intellectuals, authors can’t be stopped.

We can tribute our martyr Comrade Nazeer Abbasi Shaheed through resisting all undemocratic, anti_ working class actions being taken under tailor-made democracy.