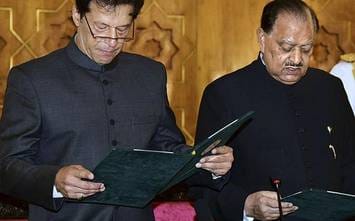 The biggest change in one year of the Insafian Govt is return of horse trading. In past we had Nawaz Sharif as biggest bidder of Parliamentary horses then former President Asif Ali Zardari introduced Gulzar Khan as a new bidder in the market, who had bought the Senators to elect Senators and thus he deprived PPP workers from humble background to become Senators as we had seen same scene in case of Aslam Gill’s election.

Now we hear from people that Jahangir Tareen is allegedly new bidder introduced.

Difference among all bidders is that PPP’s introduced bidder bid just for himself and if he wouldn’t have to bid then PPP’s any worker would got the seat. And other fact is that Gulzar Khan did all this without getting any consent from ‘Selectors’.

But Nawaz Sharif first time bid after receiving directions from the Selectors and he gathered all sold MPAs in Changa Manga Rest House Lahore. Then he started that business of buying the horses not only from Parliamentary circle but from Judiciary, Civilian and Army Babushahi to build its dynasty free from all alleged Selectors,which irritated much real king makers.

Now our alleged Selectors has introduced new bidder and he buys the winning horses.

When Imran Khan was trying to enter the ruling elites’ club and facing severe resistance although he had patronage of some old members of the Selectors Club like Hamid Gul then he had used to talk about intervention of the Selectors and horse trading in the system but as soon as he got allegedly support from top and powerful members of the selectors’ club he made slightly change in his position and now he focused fully on Sharif dynasty and other political rivals and now he would put on all blame either on Sharif dynasty or on Bhuttos but he obfuscated the role of the selctors’ club. But after selection and coming in power his newly introduced bidder Jahangir Tareen first buldoozed his tall claims trough buying the elected members of PA and now on larger scale he repeated same practice allegedly to make fail ‘No Confidence Motion’ against Sanjrani.

So we can say that in one year, Mr. Imran Khan proved that his all slogans was for Power and entrance in the ruling elites’ club, so he has been.